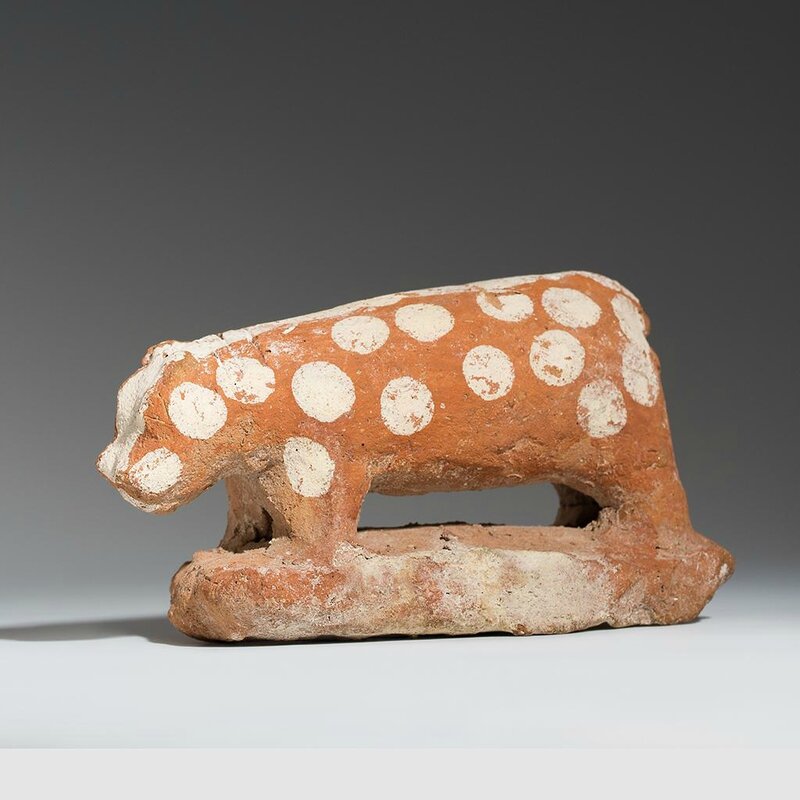 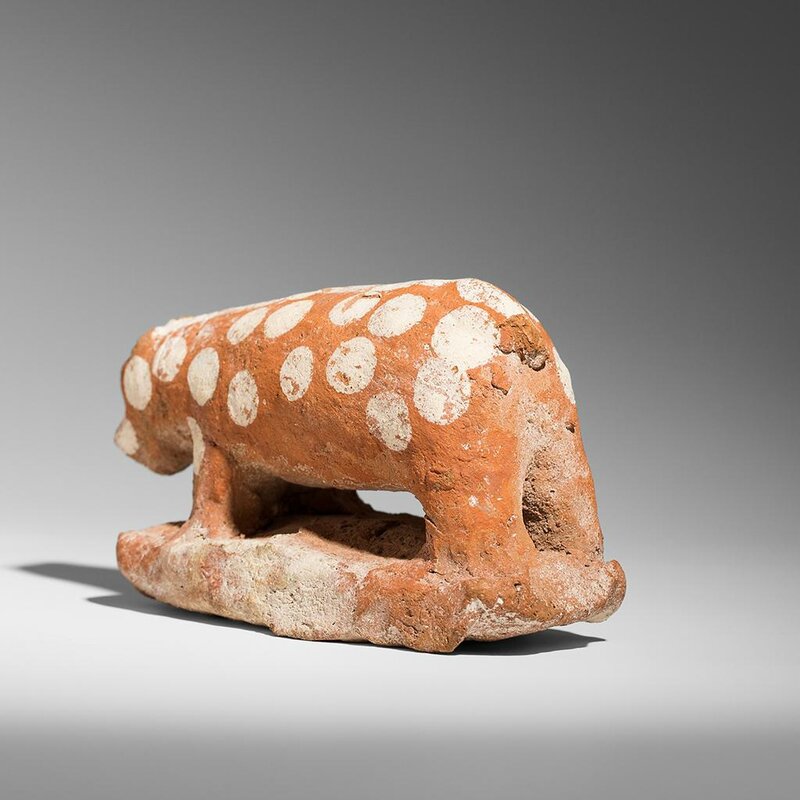 The hippopotamus (hipopotamus amphibius) was an integral member of the Nile landscape. The hippo is a big heavy animal with short cylindrical legs, and an even-toed ungulate. It lives in waterways, both during the day and the night, but in the evening it also moves in great herds over the land to feed on grass, its only nourishment. It was common to all of sub-Saharan Egypt before a great number of them were killed off for their edible flesh and for the ivory of their teeth. They disappeared from Egypt around the middle of the 19th Century.

From ancient times, a need was felt to represent this animal with the aim of symbolically overcoming its destructive power. Towards the end of the Middle Kingdom we find that a series of original and suggestive figures emerged which personified the bountiful, but also dangerous, Nile River. The body of this pachyderm, modelled in faience in an intense blue or green, was frequently decorated with painted scenes with birds and aquatic plant motifs which were associated with the environment in which it lived, giving the impression that the animal was emerging out of the very waters of the river. The figures reproduced the bulge of the ears, of the eyes and also the nasal cavities of this animal, all of which remained above water level, allowing it to see, hear and breathe, while all of its body lay submerged. The representations of these animals were often quite amusing. They were modelled with the mouth wide open, seated, with the head to one side, looking sleepy, or emerging from water. Through these images the Egyptians were trying to exorcise the danger that the live creatures represented for the boats sailing along the river.

However, when the pieces were placed in a tomb their meaning was totally different, as the piece changed into a symbolic figure for the sun, which emerged from the waters at the dawn of creation, and thus accompanied the deceased in rebirth. In the case of this piece, we have an animal made not from faience, but terracotta, placed on a rectangular plaque like a sled, the habitual means of transport for large pieces of sculpture. This may possibly allude to a ritual called the Festival of the White Hippopotamus, during which a hippo was pulled on a sled before the king. The faithful at this ceremony probably acquired figures like this one as ex-votos.

These aggressive and dangerous animals were feared by farmers for the destruction that they could cause to their cultivated fields. The hunting of the hippopotamus with a harpoon, seen often in paintings on the walls of tombs in the Old Kingdom, was a magic evocation of the struggle against the powers of evil. Towards the beginning of the Middle Kingdom, it became common to deposit statuettes of this animal in tombs.

Provenance: Private collection, England, acquired in the 1980s from the English art market.

CONDITION: In a good state of preservation. Intact.