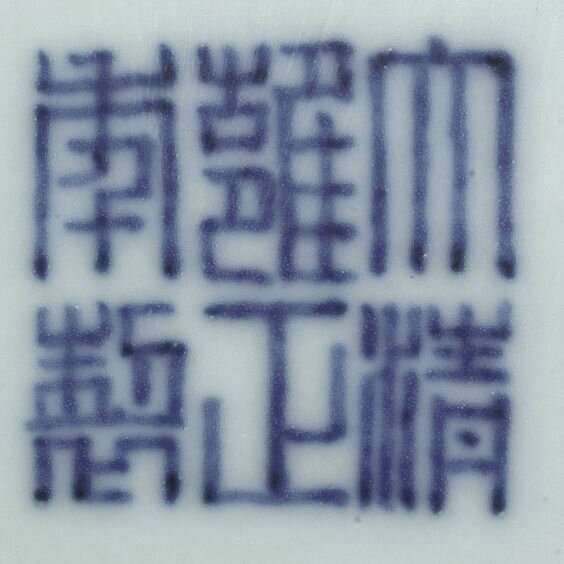 of archaistic bronze form, the broad pear-shaped body rising from a slightly spreading foot to a waisted neck encircled with a raised fillet and flanked by a pair of single-horn mythical animal-mask handles suspending mock rings, covered overall with a thick lavender-blue glaze, save for the unglazed foot ring, the base with a six-character seal mark in underglaze blue. Height 13 1/4  in., 33.7 cm

Provenance: Collection of Fred and Marguerite Shumaker, Larchmont, New York, acquired in the early 1930s, and thence by descent.

Note: This rare vase is remarkable for its subtle bluish glaze, the purity of which accentuates the graceful curves of its profile. Created in imitation of the celebrated Ru-wares of the Song period, this vase reflects the Yongzheng Emperor’s penchant for these early wares and the remarkable technical developments achieved at the imperial kilns and made to meet the specific taste of the emperor. While a delicate celadon glaze had already been developed in the Kangxi reign, it was during the Yongzheng period that the production of glazes imitating Song dynasty Ru and guan wares greatly expanded. According to the 1732 edition of the Jiangxi tongzhi [Jiangxi provincial gazetteer], compiled by Xie Min, governor of Jiangxi province between 1729 and 1732, two different types of Ru-type glazes were developed, one displaying a subtle network of crackles and the other of even tone, as seen on this vase (S.W. Bushell, Oriental Ceramic Art, London, 1981, p. 195).

Vases of this type are rare and only two other related examples, but covered in a crackled Ru-type glaze, appear to have been published; one of slightly smaller size in the Palace Museum, Beijing, is illustrated in Kangxi Yongzheng Qianlong. Qing Porcelain from the Palace Museum Collection, Hong Kong, 1989, p. 249, pl. 78; and the other was offered in our London rooms, 9th November 2011, lot 69.