A rare and large Imperial blue and white 'dragon' dish, Qianlong seal mark and of the period (1736-1795)

A rare and large Imperial blue and white 'dragon' dish, Qianlong seal mark and of the period (1736-1795) The well-potted body with rounded sides resting on a short slightly tapering circular foot, boldly painted in vibrant tones cobalt-blue tones with simulated 'heaped and piled' effect, the cavetto with a large full-face five-clawed winged-dragon pursuing the flaming pearl of wisdom, amidst dense leafy peony scrolls, the generously proportioned well superbly painted with two striding dragons amidst meandering lotus scrolls, all beneath the rim with a band of crashing and swirling waves, the reverse similarly decorated with two striding dragons amidst a blooming peony scroll, the base with a six-character zhuanshu seal mark in underglaze blue. 51.3cm (20 1/4in) diam.

Note: The magnificent dish was made in direct continuation from the Yongzheng period, demonstrating the popularity of this design; see two large blue and white 'dragon' dishes, Yongzheng marks and of the period, which were sold at Christie's New York, 22 March 2007, lot 336 and at Sotheby's Hong Kong, 8 April 2009, lot 1607. In turn the Yongzheng examples drew their inspiration from early Ming dynasty designs as demonstrated in the design of five dragons amidst lotus and peony scrolls on a blue and white dish, Xuande mark and period, and the winged dragon amidst waves painted in the well of a bowl, Xuande mark and period, illustrated by Liao Pao-show, A Panorama of Ceramics in the Collection of the National Palace Museum: Hsüan-te Ware I, Taipei, 2000, pls.2 and 66. 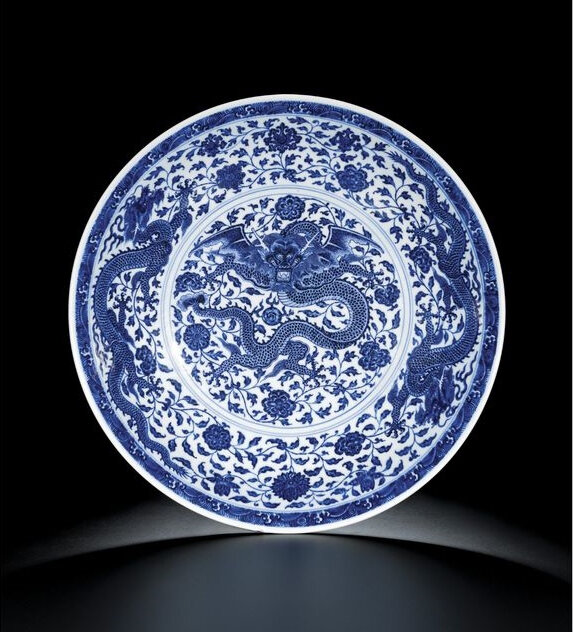 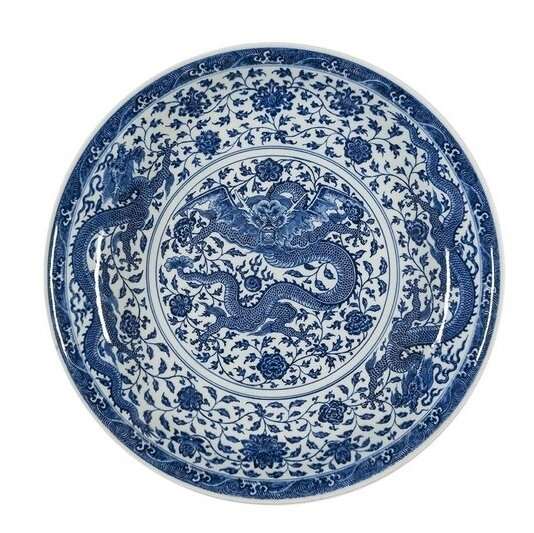 Dishes of such large dimensions and powerful design were made to impress, and would have been used in Imperial banquets and celebrations, displaying the Imperial grandeur. The dish would have been specially commissioned and stand as testament to the ingenuity of the master potters. The winged dragon is known as ying long and is the longest-lived dragon according to the Kangxi literature Shu Yi Ji or 'Notes on Creatures'.

Related large blue and white dishes, Qianlong seal mark and period, were painted with a full-faced dragon pursuing a pearl enclosing a shou character, with eight further dragons to the sides and undersides, all amidst clouds; see one example illustrated by R.Krahl and C.von Spee, Chinese Ceramics from the Gulexuan Collection, Lünen, 2003, no.123; and another example, was sold at Christie's New York, 24 March 2011, lot 1667. Commentaires sur A rare and large Imperial blue and white 'dragon' dish, Qianlong seal mark and of the period (1736-1795)