First exhibition to focus on view paintings as depictions of contemporary events opens in L.A.

First exhibition to focus on view paintings as depictions of contemporary events opens in L.A.

The Rialto Bridge with the Festive Entry of the Patriarch Antonio Correr (detail), 1735, Michele Marieschi, oil on canvas. Osterley Park, The Palmer-Morewood Collection, National Trust (accepted in lieu of tax and transferred to the National Trust by Her Majesty's Government in 1984). Photo: National Trust Photo Library / Art Resource, NY

On view at the J. Paul Getty Museum from May 9 through July 30, 2017, Eyewitness Views: Making History in Eighteenth-Century Europe is the first exhibition to focus on view paintings as depictions of contemporary events. The paintings, by artists such as Antonio Canaletto, Bernardo Bellotto, Giovanni Paolo Panini, and Francesco Guardi, are spectacular and famous works from the golden age of European view painting. The exhibition is co-organized by the Getty Museum, the Minneapolis Institute of Art, and the Cleveland Museum of Art and will travel to those museums in 2017 and 2018, respectively. The Rialto Bridge with the Festive Entry of the Patriarch Antonio Correr, 1735, Michele Marieschi, oil on canvas. Osterley Park, The Palmer-Morewood Collection, National Trust (accepted in lieu of tax and transferred to the National Trust by Her Majesty's Government in 1984). Photo: National Trust Photo Library / Art Resource, NY

“Eyewitness Views brings together an incredible array of international loans to tell the fascinating story of how artists captured, and in many ways created, history in eighteenth- century Europe,” says Timothy Potts, director of the J. Paul Getty Museum. “Both in their subject matter of spectacular public occasions, such as papal visits, and in the brilliance of their execution, these colorful panoramic views provide a window into history as well as a testament to the achievements of some of the era’s greatest painters.”

Potts adds, “Ambitious exhibitions of this kind increasingly require the commitment of partner institutions, and we are particularly grateful to our colleagues in Minneapolis and Cleveland for their support in helping us realize this exhibition.” The paintings, often commissioned by kings and queens, depict many of the great cities of Europe, including Venice, Rome, Siena, Naples, Paris, Dresden, Warsaw, and Madrid; indeed many of the iconic monuments depicted are still recognizable to a well-traveled person today. Vividly detailed and gorgeously painted, these often large-scale canvases transport viewers to the grandeur of Saint Peter’s Basilica in Rome or onto a gondola floating along the Grand Canal in Venice during a regatta. Featuring more than 40 works created by three generations of eighteenth-century artists, the exhibition lets visitors experience what it was like to be present on the scene as history is made, rubbing shoulders with monarchs, dignitaries, and popes.

In King Charles III Visiting Pope Benedict XIV at the Coffee House of the Palazzo del Quirinale, Giovanni Paolo Panini captured the young king’s conflicting emotions: tall and elegantly dressed in red, Charles betrays a hint of timidity as he arrives for his first audience with the pope on November 3, 1744. The Regatta on the Grand Canal in Honor of King Frederick IV, King of Denmark, 1711, Luca Carlevarijs, oil on canvas. The J. Paul Getty Museum.

After Dresden suffered heavy bombardment in the Seven Years’ War, the ruins of one of the city’s largest churches, the Kreuzkirche, had to be demolished. The painter Bernardo Bellotto was among those who witnessed this poignant scene in July 1765, commemorating it that same year in The Demolition of the Ruins of the Kreuzkirche.

Francesco Guardi recorded the first hot air balloon flight in Venice on April 15, 1784 in his painting The Balloon Flight of Count Zambeccari. Mistrusting this new invention, the Venetians cautiously constructed a floating launch platform on the open water of the lagoon in case the balloon were to crash—but it soared into the sky, watched by a crowd of astonished spectators. After its presentation at the Getty Museum, Eyewitness Views will travel to the Minneapolis Institute of Art from September 10 through December 31, 2017, and to the Cleveland Museum of Art from February 25 through May 20, 2018.

At the Getty, the exhibition is curated by Peter Björn Kerber, assistant curator in the department of paintings at the Getty Museum. He is the author of the richly illustrated book, also called Eyewitness Views: Making History in Eighteenth-Century Europe and published by Getty Publications in conjunction with the exhibition. 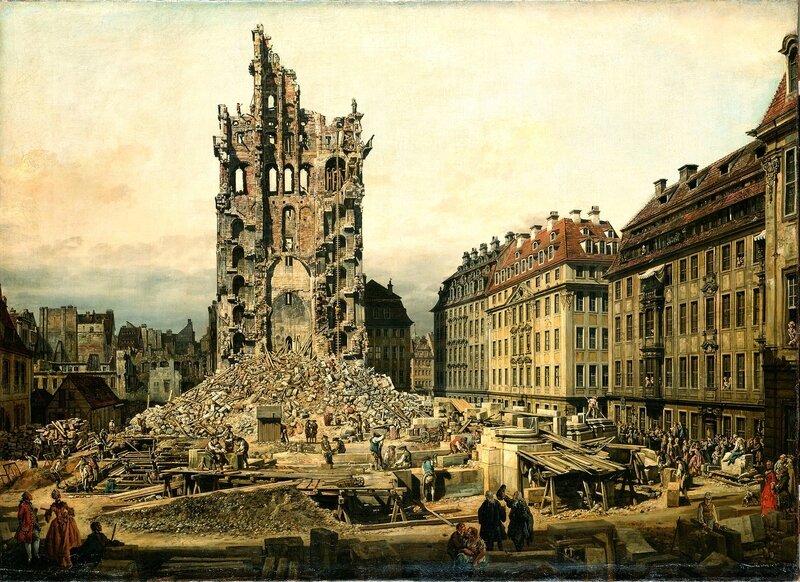