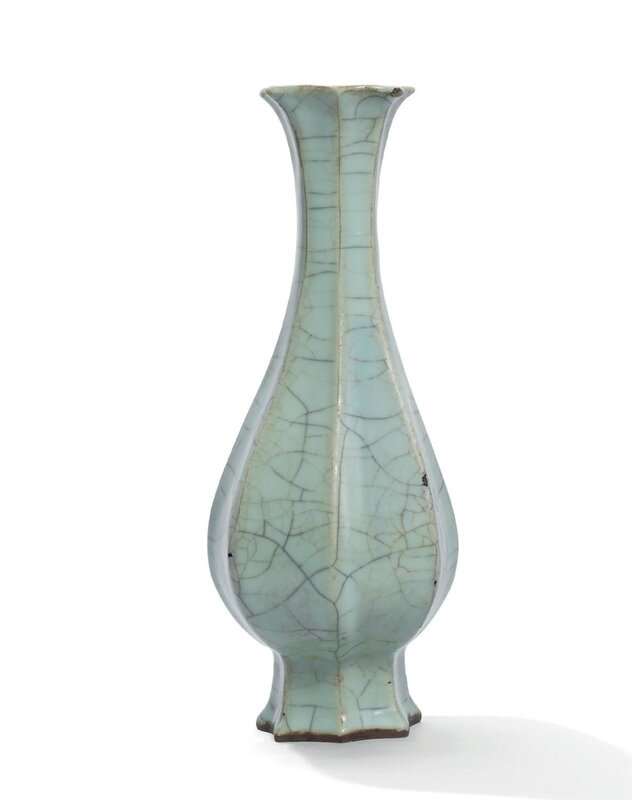 The vase is pear-shaped with a flaring mouth and a splayed foot, and moulded with eight lobes along the length of its body. It is covered overall with a greyish celadon glaze and suffused with crackles, especially along the moulded ridges. The unglazed foot rim has a dark brown dressing.

Note: The current vase belongs to a group of fine Longquan celadon pieces made in the form and style of Guan ware prototypes, and are most likely to have been commissioned by the court. A few related pieces are recorded, such as the lobed vase excavated in Jinyucun, Sichuan Province, illustrated in The Research of Porcelain of Longquan Kiln, Beijing, 2013, col pl. 8 (fig. 1); and a lobed wall vase excavated in Hangzhou, illustrated in Study of Song Xiuneisi Imperial Kilns Hangzhou, Hangzhou, 2006, p. 148, no. 112 (fig. 2). While the Jinyucun example has a lozenge-shaped cross-section, the current vase is more rectangular in form. Its shape is perhaps influenced by earlier Longquan vases with rectangular cross-section, such as the one dated to the Northern Song period illustrated by Zhu Boqian in Celadons from Longquan Kilns, Taipei, 1998, p. 110, no. 71. The so-called ‘Longquan Guan’ wares normally have a dark body, while the current vase has a greyish body applied with a dark dressing to achieve a similar visual effect. Compare a Longquan celadon cong vase (故瓷017700N000000000) in the National Palace Museum, Taipei, which also has similar dressing applied to the body material.