Note: This is an early work by Collier, painted when he was only twenty years old, and during a period when he produced some of his finest work.  He was probably still in Haarlem where he is thought to have trained and is first recorded in a list of guild members.1  His residence in Leiden is fully documented from 1667 to 1693, after which he left for London where he worked until returning to Leiden from circa 1702 to 1706.  He apparently returned to England as his last known work is dated 1707 and inscribed fecit London.

Collier produced vanitas still lifes throughout his career.  Here he has included many of the standard elements that would have been readily recognizable to his audience:  the burning candle, pocket watch and hourglass (denoting the passage of time and brevity of life); the violin with a broken string (the transient pleasure of music); the money bag (worldly riches); the scholarly books and globes (the vanity of learning); and the military flag (worldly power).  Wealth, knowledge and power are all earthly, temporary and ultimately meaningless.  Should anyone somehow miss the point, Collier has included the archetypal text of all vanitas still lifes on a piece of paper at far right: Vanitas/Vanitatu(m)/Et Omnia/Vanitas [Vanity of Vanities, All is Vanity], (Ecclesiastes 1:2).

Two other similar vanitas still lifes by Collier dated 1662 can be found in the collections of The Metropolitan Museum of Art, New York (Inv.no. 71.19) and the Rijksmuseum, Amsterdam (Inv. no. SK-A-3471). 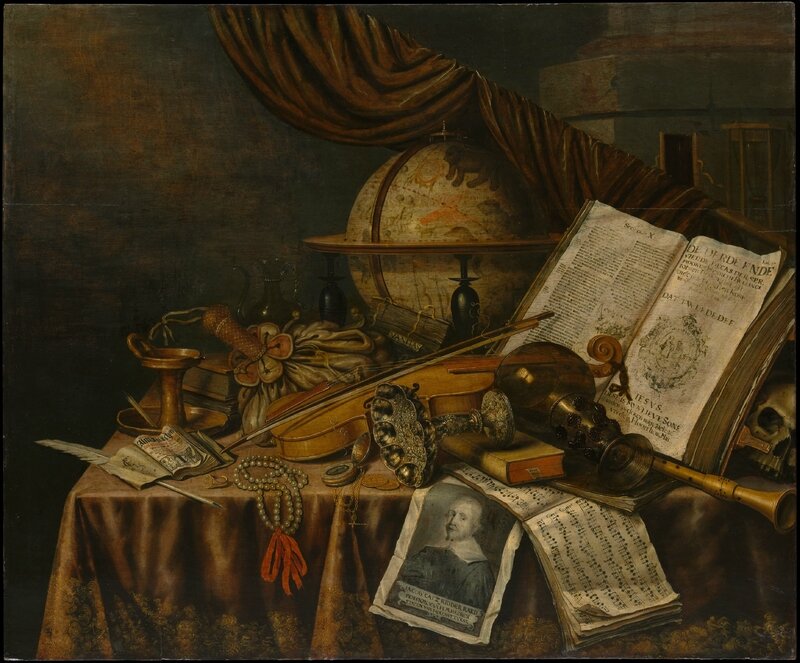