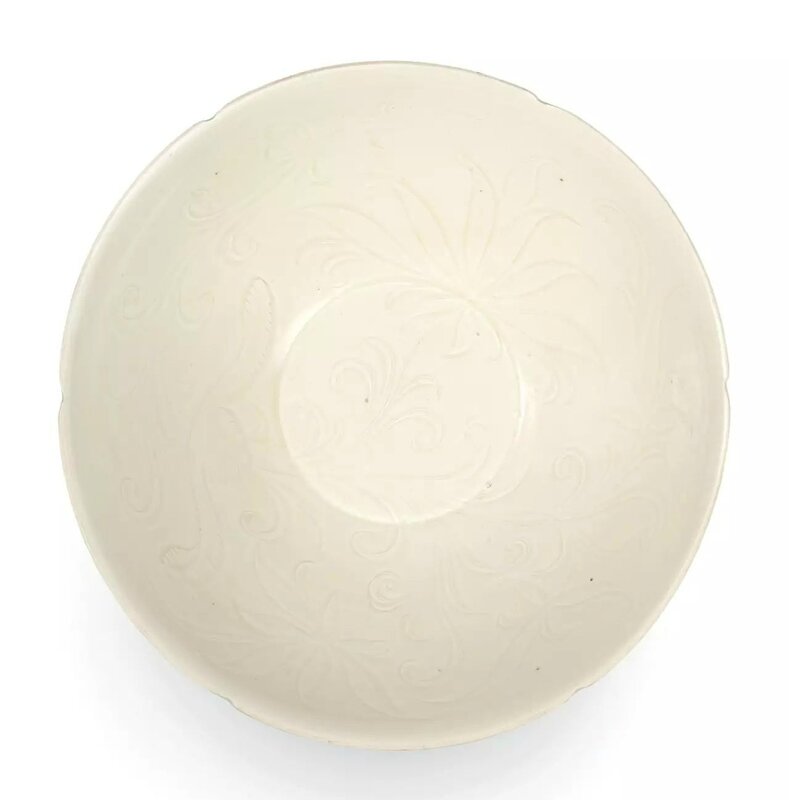 the rounded conical sides supported on a knife-pared foot, rising to a flared rim with six indentations, the interior liberally and superbly carved with two large lotus blooms and broad leaves borne on curling stems, applied overall with an ivory-coloured glaze pooling in characteristic teardrops on the plain exterior, save for the unglazed lobed rim, the base partially covered with a dab of glaze and revealing the greyish-white body.

Note: At a casual glance this elegant bowl might seem like the archetypal Ding bowl; a closer look makes it clear that this bowl is on a different plane from most related pieces: its superb potting, swiftly and masterfully carved design, exquisite glaze and exceptional size are hard to match among extant Ding wares. The Ding kilns are known to have produced porcelains for the Northern Song (960-1127) court, but only occasionally do we come across a piece so concisely designed and exquisitely crafted that an imperial provenance springs to mind, and so well preserved that we think of a carefully protected heirloom piece. The present bowl, one of the largest examples of its type in existence, is one of those pieces.

Although this superbly styled and executed vessel would seem like a blue-print for Ding bowls, as its shape and design stand in the well-known stylistic tradition of the Ding kilns at the peak of their activity in the Northern Song dynasty, the present bowl stands out not only because of its large size, but also its distinct, mould-enhanced shape, the crispness and clarity of its carving with two lotus blooms and a large leaf and two stems of arrow-head, and the gloss and tactility of its glaze. It is an individually crafted example which seems like an idealised model for a more quickly produced series of smaller bowls, to which nowhere near the same amount of time and care could be devoted, and which therefore could not rise to the same standard.

Celebrated for their thin potting, fine white body, which does not require a coating of slip to appear white after firing, and their ivory-coloured glaze, which tends to run down in somewhat darker ‘tears’, Ding wares became renowned for their elegant forms, some of which derived from contemporaneous silver and lacquer shapes, but many others – like the present form – were independently developed by the potters, and found favour with the court and wealthy monasteries during the Northern Song and Jin (1115-1234) periods. Due to the fragility of their thinly potted body that was prone to warping during the potting and firing stages, Ding bowls of similar type often measure around 22 cm in diameter, but hardly ever exceed that size. Only some of the wide basins and shallow moulded dishes from the Ding kilns are larger in diameter, but they are much more sturdily potted.

The restrained, yet flowing lines of the carved decoration successfully capture the spirit and grace of the lotus flower, like brush strokes in contemporary ink painting, while accentuating the refined quality of the porcelain body. Symbolic of purity and integrity, because it rises clean out of muddy waters, the lotus was a popular motif throughout the Song dynasty (960-1279) due to the Confucian value of personal virtue, and frequently appeared on white-glazed Ding wares, whose pure glaze tone enhances the flower’s message.

Comparable bowls are generally smaller and show lotus designs with only a single bloom. A bowl of similar size (24.9 cm) with a carved peony design, in the National Palace Museum, Taiwan, was included in the Museum’s exhibition Dingzhou hua ci. Yuan zang Dingyaoxi baici tezhan/Decorated Porcelains of Dingzhou. White Ding wares from the collection of the National Palace Museum, Taipei, 2014, cat. no. II-29; a smaller lotus-decorated bowl (21.8 cm) in Beijing is published in The Complete Collection of Treasures of the Palace Museum. Porcelain of the Song Dynasty (I), Hong Kong, 1996, pl. 52, together with a fractionally larger bowl (26.6 cm) with moulded decoration, pl. 44, both from the Qing court collection; the latter bowl is illustrated again in Ding ci ya ji. Gugong Bowuyuan zhencang ji chutu Dingyao ciqi huicui/Selection of Ding Ware. The Palace Museum’s Collection and Archaeological Excavation, Palace Museum, Beijing, 2012, pl. 65, together with fragments of a large deep dish (24.6 cm) from the Ding kiln site in Quyang, Hebei province, pl. 114, with carved dragon design and engraved on the base with the characters dong gong (‘Eastern Palace’). A slightly smaller bowl from the Alfred Schoenlicht collection was sold in our London rooms, 13th December 1955, lot 58 and again 14th December 1971, lot 194; another was sold in London, 14th July 1981, lot 77; and a third in these rooms, 2nd May 2000, lot 588 and again in our London rooms, 16th May 2012, lot 88.