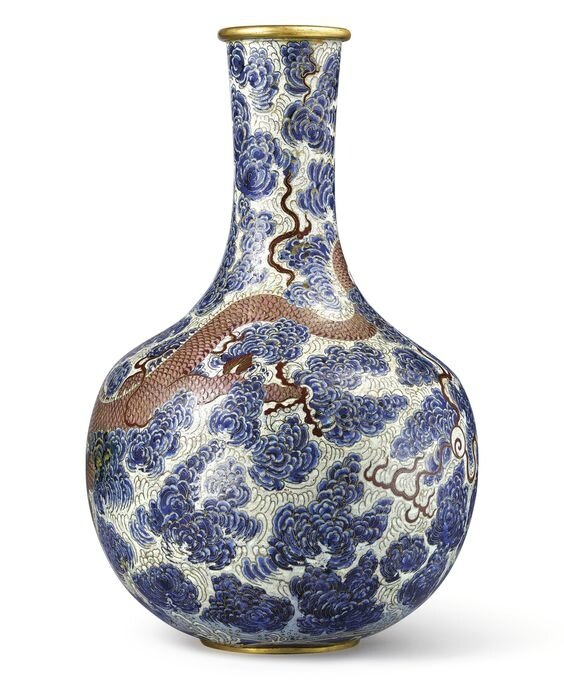 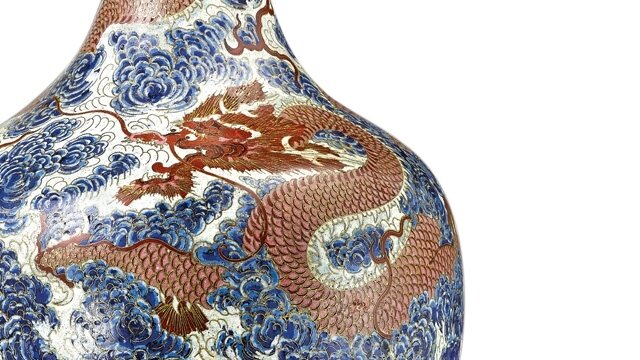 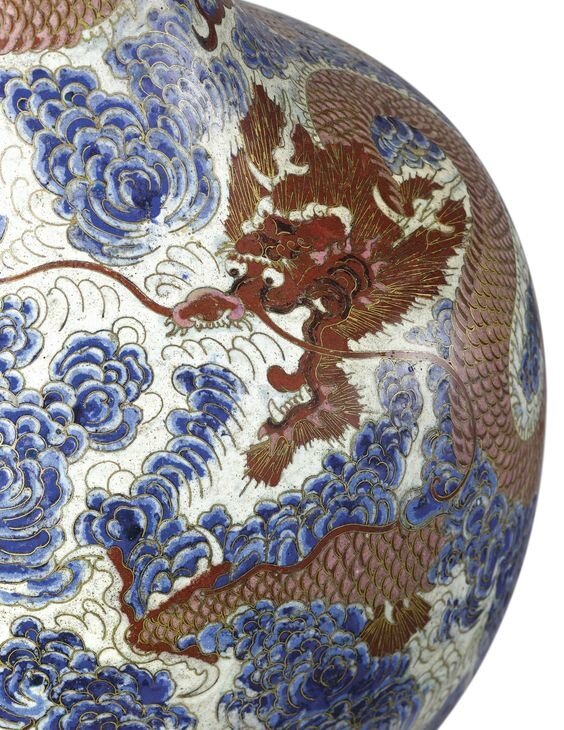 of impressive size, the globular body supported on a short circular foot, surmounted by a waisted cylindrical neck with rolled lip, powerfully decorated with bright enamels of various hue within strong gilt-bronze outlines, depicting a ferocious three-clawed dragon with mouth wide opened revealing sharp fangs and a curled tongue, its long curly whiskers issuing from either side of its flared snout, crowned by a pair of white horns protruding from its mane formed from a mass of radiating red fur, sweeping back to its powerful coiling body covered in pink and red scales, its forearm extended to reach for a flaming pearl, the muscular limbs aggressively striding on tumultuous waves of various shades of blue and white foams swirling into crested currents just above the base, the rim and the circular base gilt.

Note: The Yongzheng Emperor (r. 1723-1735) was one of the most innovative imperial art patrons. He encouraged the recreation of masterpieces of the past at the imperial workshops, as well as the creation of original contemporary designs, sometimes loosely based on earlier prototypes, that became equally influential in subsequent reigns. Many of these imperial products remained unmarked. The Qianlong Emperor (r. 1736-1795), whose reign lasted for much longer, multiplied commissions from the imperial workshops and propagated his own patronage in a much more eloquent way. Most unmarked eighteenth-century pieces are automatically attributed to the Qianlong reign, although the Emperor is known to have been enamoured with reign marks, and stylistically largely followed his father’s lead.

As far as cloisonné is concerned, Yongzheng reign marks are virtually unknown, and unmarked pieces are hardly ever attributed to the Yongzheng reign. The imperial workshops that were active producing cloisonné wares during the Kangxi (1662-1722) and Qianlong periods did, however, not cease to operate in the time in-between. Orders for cloisonné wares – even if small in number – do exist among the Yongzheng records of the Zaobanchu, the workshops supervised by the Imperial Household Department.

The magnificent tianqiuping offered here is remarkable in many ways, not only in its rare colour scheme and monumental size, but most importantly in its unusual workmanship and the outstanding quality of the enamelling technique. While on cloisonné wares the applied metal wires generally form cells or enclosures (cloisons) that are then filled with differently coloured glass pastes, on the present vase they are used rather like freely distributed brush strokes sketching the design, that was then filled in with delicately graded washes of colour. That the raised metal wires are not just employed for outlines, and colour changes do not necessarily coincide with these metal separators, made possible a much more painterly approach to the subject than is customary on cloisonné wares. The lively overall composition and the admirable shading accomplished in the reds as well as the blues, were clearly inspired by a painted porcelain prototype.

This colour scheme is of course well known from underglaze copper-red and cobalt-blue decoration on Jingdezhen porcelains, but is extremely rare for a piece of cloisonné enamel. A very similar porcelain design did exist in the Yongzheng period, a tianqiuping inscribed with the imperial reign mark, painted with a copper-red three-clawed dragon emerging from among delicately shaded, fluffy blue clouds, which partly hide its body and limbs, very similar in its layout and the execution of the design. Only one example appears to be extant of this pattern, a vase illustrated in Sotheby’s: Thirty Years in Hong Kong, Hong Kong, 2003, pl. 283; and in Giuseppe Eskenazi in collaboration with Hajni Elias, A Dealer’s Hand. The Chinese Art World Through the Eyes of Giuseppe Eskenazi, London, 2012, pl. 158; and sold three times in these rooms, 2nd May 1995, lot 118; 7th May 2002, lot 580, and 31st October 2004, lot 25 (fig. 1). While its height of 51 cm already considerably exceeds the size of the usual porcelain tianqiuping, the metal body of the present piece made an even larger size possible, 57.3 cm, which is equally rare, however, in that medium. This free style of painting on a work of art did not originate in the Yongzheng reign, but was developed in the Yongle period (1403-1424) of the Ming dynasty (1368-1644). In the early Ming period tianqiuping with the design of a large three-clawed dragon circling around the sides were produced in several different versions, with the dragon floating among lingzhi-shaped clouds, among lotus scrolls, or reserved in white among overall waves; see The Complete Collection of Treasures of the Palace Museum. Blue and White Porcelain with Underglazed Red, Shanghai, 2000, vol. 1, pls 87 (fig. 2) and 88, and Mingdai chunian ciqi tezhan mulu/Catalogue of a Special Exhibition of Early Ming Period Porcelain, National Palace Museum, Taipei, 1982, cat. no. 5. While the Yongzheng porcelain vase was clearly inspired by a Yongle example, it does not copy any version closely. Fairly close copies of at least two of the Ming patterns were also produced in the Yongzheng reign but, being direct imitations, they neither capture the strength of the original designs, nor are they infused with the vibrancy of a new departure; see The Complete Collection, op.cit., vol. 3, pls 81, 102 and 197.

The present cloisonné vase shows the same powerful style and undoubted originality as its Yongzheng porcelain counterpart, and equally seems to be unique. Only one other dragon-decorated tianqiuping appears to be recorded in this porcelain colour scheme, a smaller piece (41.9 cm) in the Palace Museum, Beijing, attributed to the middle Qing period; see Compendium of Collection in the Palace Museum. Enamels, vol. 3: Cloisonné in the Qing Dynasty, Beijing, 2011, pl. 102 (fig. 3); the dragon on that vase is much less close to the Yongzheng porcelain example than the one on the present piece. A much smaller (24 cm) cloisonné tianqiuping attributed to the early eighteenth century and perhaps of similar date as the present vase, but with a red dragon and blue waves on a dark ground, was sold in these rooms, 5th October 2016, lot 9, from the collections of Kenneth Malcolm and Roger Keverne; and one cloisonné example of similar size, but with the design executed in the more customary multi-coloured palette on a turquoise ground and attributed to the Qianlong period, was sold twice in our London rooms, 12th June 1990, lot 52, and 9th November 2011, lot 401. cast with a globular body resting on a gilt-bronze countersunk base and surmounted by a tall tubular neck with a gilt-bronze lipped mouthrim, the exterior decorated in vivid cloisonné enamels with a pair of two-clawed scaly red dragons writhing ferociously and sinuously amidst dense clusters of variegated blue clouds resembling flowering blooms, all above a band of crashing waves encircling the foot, the details finely accentuated with thin gilt-bronze outlines.

Note: Finely enamelled in shades of blue and red to resemble underglaze-blue and red porcelains, this vase is extremely rare for its rendering of the theme inspired by the celebrated Southern Song ink handscroll painting Nine Dragons by the prominent poet, calligrapher and artist, Chen Rong (active 1235-58). The innovative spirit of the original painting has been continued on this vase, where the craftsman has attempted to recreate the atmospheric billowing clouds through petal-shaped cloisons that have been filled with graduating tones of blue. The overlapping cloud form has also cleverly been developed to resemble peony flowers, which are considered the 'king of flowers'.

An underglaze-blue vase decorated with the Nine Dragons motif reveals that the Yongzheng Emperor had access to and was an admirer of the painting. The craftsman has successfully manipulated the cobalt-blue to produce a vase that clearly points to its prototype; this Yongzheng mark and period vase was sold in these rooms, 20th May 1986, lot 40, and is published in James Spencer, Selected Chinese Ceramics from Han to Qing Dynasties, Taipei, 1990, pl. 126, and in Geng Baochang, Ming Qing ciqi jianding [Appraisal of Ming and Qing porcelain], Hong Kong, 1993, col. pl. 103. Compare also a Yongzheng mark and period underglaze-red and blue tianqiuping decorated with a large red dragon striding through crashing waves, in the Qing Court collection, and still in Beijing, published in The Complete Collection of Treasures of the Palace Museum. Blue and White Porcelain with Underglazed Red (III), Shanghai, 2000, pl. 197.

Compare vases enamelled in a similar style with this motif, but attributed to the Qianlong period; one of similar bottle form but with a small foot, and the design on a white ground, in the Palace Museum, Beijing, is illustrated in Compendium of Collection in the Palace Museum. Enamels, vol. 3, Cloisonné in the Qing Dynasty, Beijing, 2011, pl. 102; and a large tianqiuping, decorated with a blue dragon against polychrome clouds, sold twice in our London rooms, 12th June 1990, lot 52, and again, 9th November 2011, lot 401.