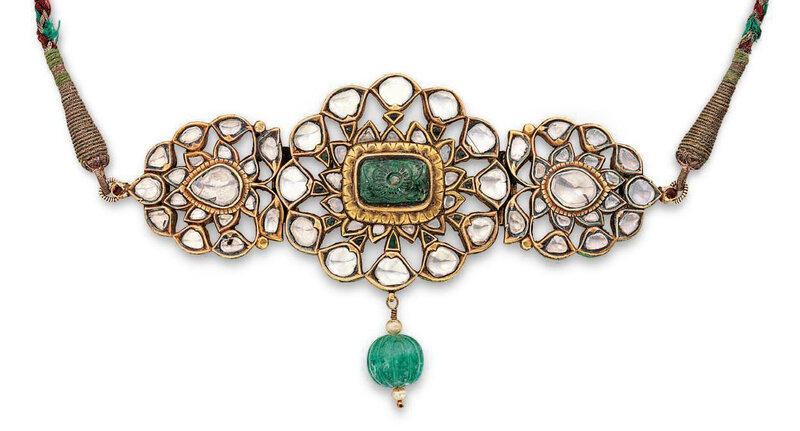 Of typical form, the central panel set with diamonds around a rectangular carved emerald, a fluted emerald bead suspended below, with hinged tapering foliate panels on either side similarly set with diamonds, the reverse enamelled with red and green floral motifs on cream ground.

Note: The armband (bazuband) is an ancient form of jewellery and can be seen on early Indian sculpture, such as on figures of Gandharan-period bodhisattvas in the 3rd and 4th centuries. The armband could be worn singly but is often seen worn in pairs on both arms. Bazubands from the Mughal period are usually a three-part hinged ornament, each section set with gemstones. The Gentil Album, dated circa 1774, in the Victoria and Albert Museum illustrates various tripartite jewels which could be bazubands or sarpatti (part of turban ornaments) (inv. no. IS 1925-1980; S. Stronge, N. Smith and J.C. Harle, A Golden Treasury: Jewellery from the Indian Subcontinent, Ahmedabad, 1988, fig. 6, pp.28-29. There is a comparable bazuband from Hyderabad, dated to circa 1775-1825, and a 19th century sarpech (turban ornament) from Jaipur in the Al Thani collection. Both ornaments, like our bazuband, have three hinged openwork gem-set panels and an enamelled reverse (Amin Jaffer, Beyond Extravagance: A Royal Collection of Gems and Jewels, New York, 2013, no.73,80, pp.194,196).