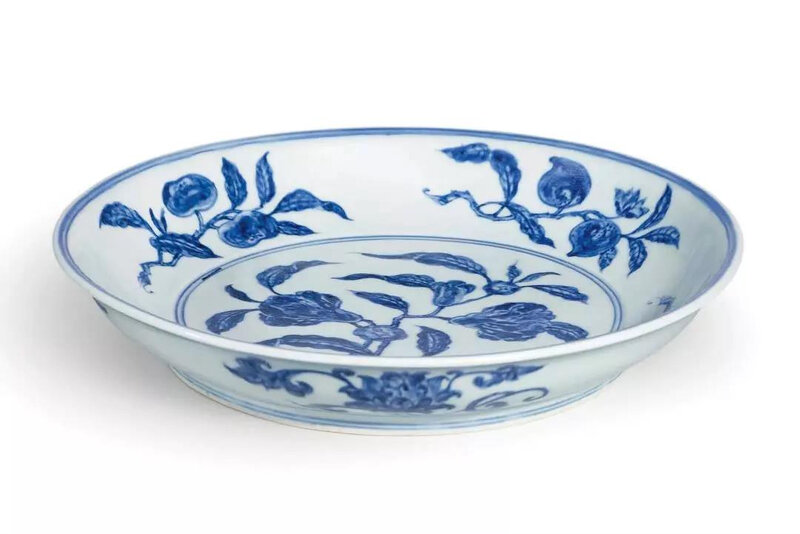 well potted with low rounded sides rising from a tapered foot to a flared rim, boldly painted to the interior in rich cobalt-blue tones with the 'heaped and piled' effect, depicting in the central interior a medallion enclosing a large flowering pomegranate spray with two open blooms and three attendant buds on a gnarled leafy stem, encircled on the cavetto by detached fruiting branches of peach, lychee, crab apple and persimmon, the exterior painted with four formal lotus sprays, all divided by double-line borders, inscribed on one side just under the rim with a horizontal six-character reign mark, covered overall in a translucent glaze save for the base revealing the buff-coloured body with characteristic iron spots.

Note: Superbly painted with a dainty floral sprig in the centre, this elegant dish epitomises the exquisite ceramic production at Jingdezhen in the Xuande period. It belongs to a group of dishes painted with different flowering and fruiting branches, which were developed by the Xuande imperial kilns and remained popular almost throughout the Ming dynasty. The present variation is particularly successful in apprehending the beauty of nature. The pattern of pomegranate flowers in various stages of growth – from delicate buds to exuberant bloom with lush petals – and with naturalistic leaves slightly curled at the tips, appears to have enjoyed an immediate success and continued to be painted on imperial dishes up until the Jiajing period, covering a span of over a century. The Xuande version is of course extremely rare, with only five other examples recorded.

In the early Ming dynasty, the court supervised the production of the Jingdezhen kilns and commissioned imperial wares with decorations which were based on guanyang (official design) or huaben (model drawing) submitted by court artists. The Xuande Emperor, a devoted patron of the arts and himself a talented painter, even raised the total number of official kilns from 32 to 58 in order to fortify such production. Despite its vividness, the instability and fuzziness of the imported cobalt prevalent on the earlier Yongle wares demanded a revised formula of the pigment. With the inclusion of manganese native to China, the cobalt pigment used in the Xuande period enabled greater precision of the brushwork, and in turn conveys a stronger sense of confidence on the part of the painter. The present dish, with bold outlines and painterly washes, successfully captures the grace of the garden plants at their zenith, in a way not dissimilar to Chinese literati paintings. The detached peach, lychee, crab apple and persimmon branches on the cavetto and the lotus sprays on the exterior are sparsely arranged to evoke an overall compositional openness.

Blue and white dishes of this design of Xuande mark and period are extremely rare and there are only four known examples preserved in museums worldwide: One in the National Palace Museum, Taipei, illustrated in Catalogue of the Special Exhibition of Selected Hsuan-te Imperial Porcelains of the Ming Dynasty, Taipei, 1998, cat. no. 197; one from the Roy Leventritt (1897-1898) collection and now in the Asian Art Museum of San Francisco, exhibited in Ming Blue-and-white: An Exhibition of Blue-decorated Porcelain of the Ming dynasty, The Art Institute of Chicago, Chicago, 1949-1950, cat. no. 54, and published in Clarence F. Shangraw, ‘Fifteenth Century Blue-and-White Porcelain in the Asian Art Museum of San Francisco’, Chinese Ceramics. Selected Articles from Orientations 1982-1998, Hong Kong, 1999, p. 107 bottom; one in the Suzhou Museum, published in Zhongguo meishu quanji. Gongyi meishu bian: Taoci [Complete series on Chinese art. Arts and crafts section: Ceramics], Shanghai, 1988-1991, vol. 3, pl. 77; and the fourth in the Idemitsu Museum of Arts, included in Chinese Ceramics in the Idemitsu Collection, Tokyo, 1987, pl. 638, and again in Ceramics that Fascinated Emperors – Treasures of the Chinese Jingdezhen Kiln, Tokyo, 2003, cat. no. 24. The only other example still preserved in private hands was sold at Christie’s Hong Kong, 27th April 1997, lot 72.

This Xuande blue and white design with a pomegranate branch in the centre, as well as related ones with gardenia, lotus or day lilies, became blueprints for dishes in various colour combinations, which became particularly popular in the 16th century. Compare the pomegranate pattern on a blue-ground reverse-decorated dish and on a brown-glazed counterpart, both with horizontal Xuande marks below the rim, illustrated in Catalogue of the Special Exhibition of Selected Hsuan-te Imperial Porcelains of the Ming Dynasty, op. cit., cat. nos 198 and 199, as well as four ‘gardenia’ dishes in different colour combinations and with the reign mark on the base, cat. nos 193-196. See also a yellow-ground example of this pomegranate design from the Sir Percival David collection in the British Museum, London, illustrated in Regina Krahl and Jessica Harrison-Hall, Chinese Ceramics. Highlights from the Sir Percival David Collection, London, 2009, pl. 35; and another in the Idemitsu collection and included in the exhibition Ceramics that Fascinated Emperors, op. cit., cat. no. 25.

Revered not only by the Xuande Emperor’s court, these floral designs continued to define the standard of floral dishes in the following reigns with only slight modifications in composition and the placement of the reign mark. For Chenghua blue and white dishes of this pomegranate design, see one preserved in the Shanghai Museum illustrated in Wang Qingzheng, Underglaze Blue & Red, Shanghai Museum, 1987, col. pl. 80; and another in the Matsuoka Museum of Art, exhibited in Matsuoka Bijutsukan shozo Chugoku toji meihin ten [Exhibition of Chinese ceramics in the Matsuoka Museum of Art], Tokyo, 1983, cat. no. 58. Three yellow-ground dishes of this pomegranate design from later reigns are in the Idemitsu collection: a Chenghua example with a horizontal mark below the rim, Ceramics that Fascinated Emperors, op. cit., cat. no. 30; a Zhengde version with the reign mark in a double circle on the base, cat. no. 41; and a Jiajing dish with a horizontal mark below the rim, cat. no. 51. See also a Zhengde yellow-ground dish in this sale, lot 127.

Representations of pomegranates are most easily identified by their fruits, usually depicted with an abundance of seeds signifying fertility. See a fruiting branch of pomegranate on an early 15th century blue and white bowl, illustrated in Regina Krahl, Chinese Ceramics in the Topkapi Saray Museum, Istanbul, ed. John Ayers, London, 1986, vol. 2, no. 15/1421, cat. no. 608. The present design, however, omits the fruits and focuses instead on the heavy blooms of dense curling petals, which are also clearly identified by their distinctive calyx.