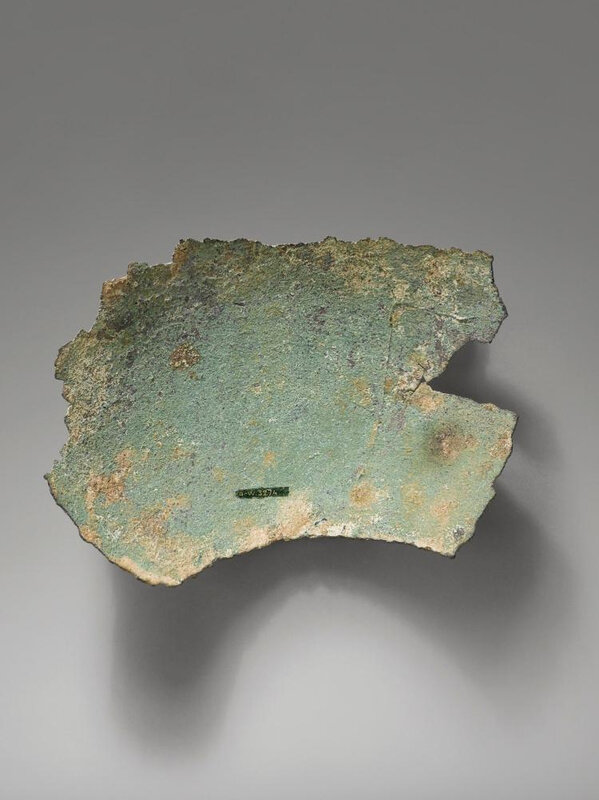 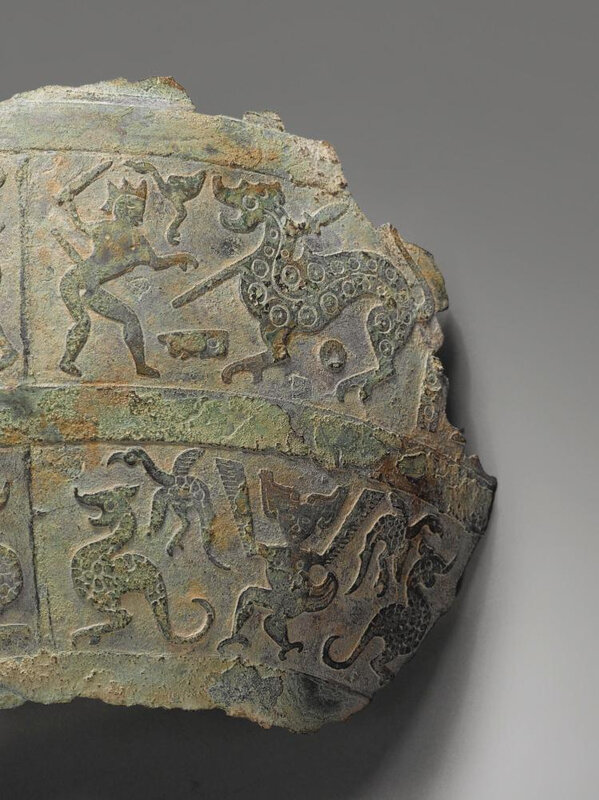 Note: Like the small bronze vessel illustrated in lot 17, the present fragment originally formed part of a bronze Hu-shaped vessel. The rounded form of this thinly cast fragment suggests that it came from the body of a vessel, compare a complete vessel cast with a strikingly similar design from the Avery Brundage Collection, illustrated in Rene-Yvon Levebvre d'Argence, Bronze Vessels of Ancient China in the Avery Brundage Collection, San Francisco, 1977, p. 126, pl. LV, and a second hu-shaped vessel with a similar pictorial design from the Stoclet Collection, Brussels, published in H.F.E. Visser, Asiatic Art in Private Collections of Holland and Belgium, Amsterdam, 1948, p. 134, pls. 27 and 28.

The decoration on this particular fragment is organised in horizontal registers depicting strange human and animal figures in profile and engaged in what Rene-Yvon Levebvre d'Argence describes as 'some sort of pugnacious activity', compare Rene-Yvon Levebvre d'Argence, ibid., p. 126. Bronzes with pictorial designs featuring human and animal figures first appear in the late 6th/5th century of the Eastern Zhou period and are rare. On some of these vessels, the designs are inlaid with copper, on others, such as on this fragment, the design is cast in a flat relief against a plain background.

The development and different styles of this comparatively small group of bronze vessels have been researched by Charles D. Weber in Chinese Pictorial Vessels of the Late Eastern Zhou Period, Ascona, 1968, in which the present fragment is also reproduced, ibid., fig. 32. Several bronze hu with the motif of a man fighting an animal with a spear, including the Avery-Brundage example and two examples excavated from Liulige, Henan, are illustrated by Charles Weber, ibid., figs. 42a, 42c, 43b, 43c. Weber also illustrates two bronze vessels from Liulige and one from the Eric Lidow Collection, and a third from the collection of J. Stonborough, Paris, depicting a 'bird-man' with strange blade-like arms, tail and clawed feet between birds as seen on the lower register on the David-Weill fragment, compare Charled D. Weber, ibid., figs. 45a, 45b and 48c.