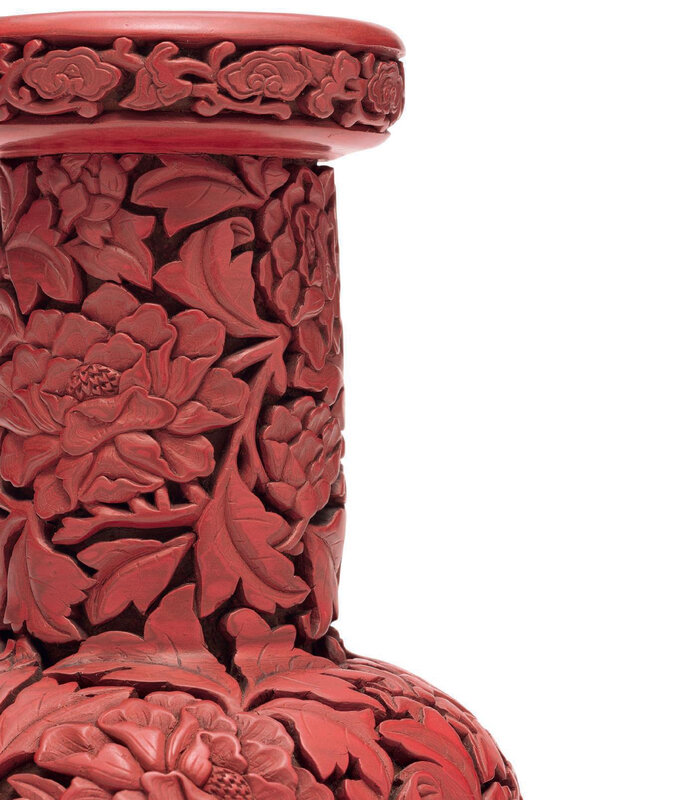 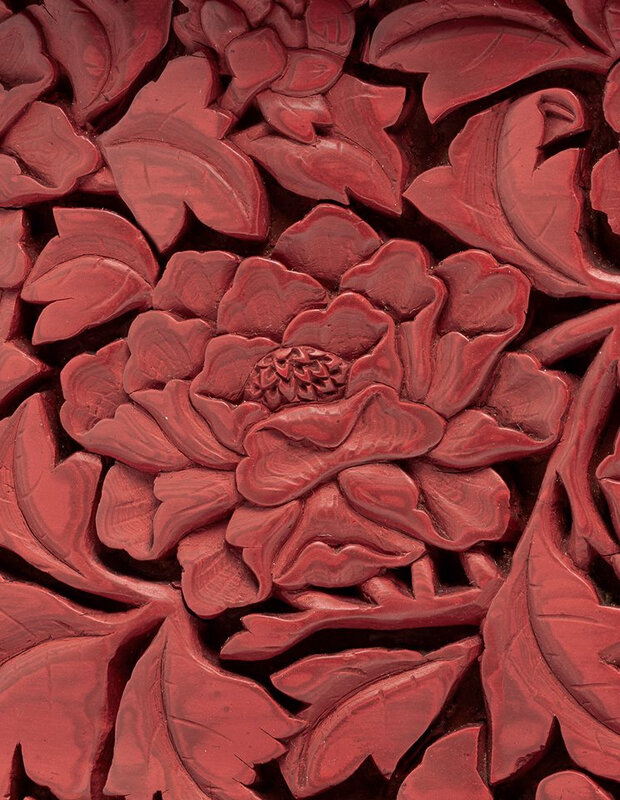 Carved all over with a graceful and dense design of overlapping peony blossoms and leaves below a band of lingzhi scroll encircling the mouth, the interior and base lacquered black, Japanese wood box.

This rare vase is a fine example of the centuries-old tradition in the Chinese applied arts of artisans working in one medium looking to other media and periods for inspiration. In the case of the present vase, a Song-Yuan dynasty Longquan celadon shape, the “mallet” vase, has been appropriated for the medium of carved lacquer.

The "mallet" form, which takes its name from the wooden beater used in fulling cloth, first appears in Longquan celadon wares of Southern Song dynasty date (1127-1279). Most vases of Longquan celadon "mallet" type have a pair of either phoenix or dragon-fish (yulong)-form handles flanking the columnar neck, but a small number without handles exists, such as the vase from the Qing Court collection in the Palace Museum, Beijing, illustrated in The Complete Collection of Treasures of the Palace Museum - 33 - Porcelain of the Song Dynasty (II), Hong Kong, 1996, p. 112, no. 100. Another was sold at Christie's, Hong Kong, 26 November 2018, lot 8007. Both of these vases exhibit the best features of these Longquan celadon vases, a glaze that is thick and translucent with a texture reminiscent of jade, and a lack of any decoration that would detract from the elegance of the shape and glaze.

On the present vase, this refined, simple shape has been transformed, not only by being made in lacquer but by having the body carved all over with flower scroll, a decorative motif popular during the Yuan and Ming dynasties, thirteenth-sixteenth centuries, on wares of different media, including blue and white porcelain, cloisonné enamel and carved lacquer. The floral decoration on carved lacquers is more densely arranged than on the contemporaneous porcelain and enamel wares, where there tends to be more visible background. Although most of the lacquer pieces of this date carved with flowers are dishes, there are a few vessels of a different shape. One of these is a zhadou carved with composite flower scroll, dated Yuan dynasty, and signed by Yang Mao, thought to have worked in the late Yuan and early Ming period, in the Qing Court collection, Beijing, illustrated in The Complete Collection of Treasures of the Palace Museum - 45 - Lacquer Wares of the Yuan and Ming Dynasties, Hong Kong, 2006, pp. 4-5, pl. 2. Also illustrated, pl. 22, is a Yongle (1403-1425)-marked bowl and cover carved with flowers. Another vase, of bottle shape, carved around the bulbous body with flower scroll between petal borders and below a bamboo-ribbed, cylindrical neck, inscribed with a Xuande (1426-1435) mark over a partly erased Yongle mark, is in the British Museum, and illustrated by Derek Clifford in Chinese Carved Lacquer, London, 1992, pp. 34-35, pl. 20.

Few other carved red lacquer vases of this "mallet" shape appear to have been made. Those that have been published appear to fall into two categories. On the first type, a plain, narrow band separates the flower scroll on the body from that on the neck. Two vases of this type have been published, and on each the decoration is of composite flowers, with a fretwork band encircling the outside of the mouth rim. One of these vases is the well-known example with Yongle mark in the National Palace Museum, Taipei, illustrated in Carving the Subtle Radiance of Colors: Treasured Lacquerware in the National Palace Museum, Taipei, 2008, pp. 24-25, no. 7. (Fig. 1) The other, also with an incised Yongle mark, and dated early Ming dynasty, 15th century, from the collection of Mrs. M. Legrand (1883-1978), was sold at Christie's, London, 10 May 2016, lot 1. 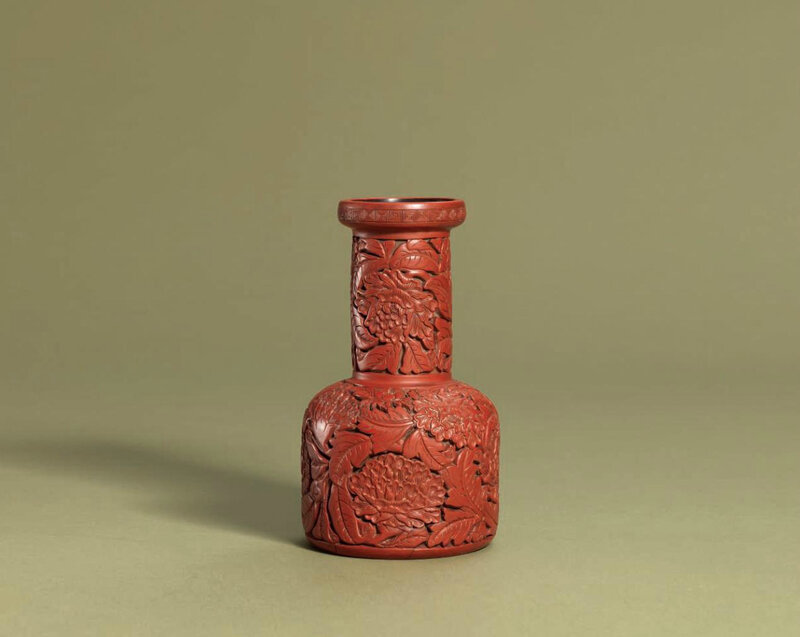 The Irving lacquer vase is of the second type with the floral decoration continuing from the body onto the neck. One of these, with Xuande mark, which is carved with a similar design of continuous leafy peony decoration, is in the National Palace Museum, Taipei, and illustrated in Carving the Subtle Radiance of Colors, pp. 44-45, no. 26, where, based on the style of the carving, it is dated to the sixteenth century. The outer mouth rim of this vase is carved with a fretwork band rather than the lingzhi scroll seen on the present vase. The other vase of this second type, which does have the band of lingzhi scroll on the outer mouth rim, is represented by the example in the Museum of Lacquer Art, Münster, Germany, and illustrated by Clifford, ibid., Chinese Carved Lacquer, pp. 34-35, pl. 19. However, rather than only peony decoration, the flowers represent those of the four seasons. The shape of this second type of lacquer mallet-form vase is also slightly different from the first type, in that the body is subtly more rounded, especially at the foot, and the neck is slightly broader.