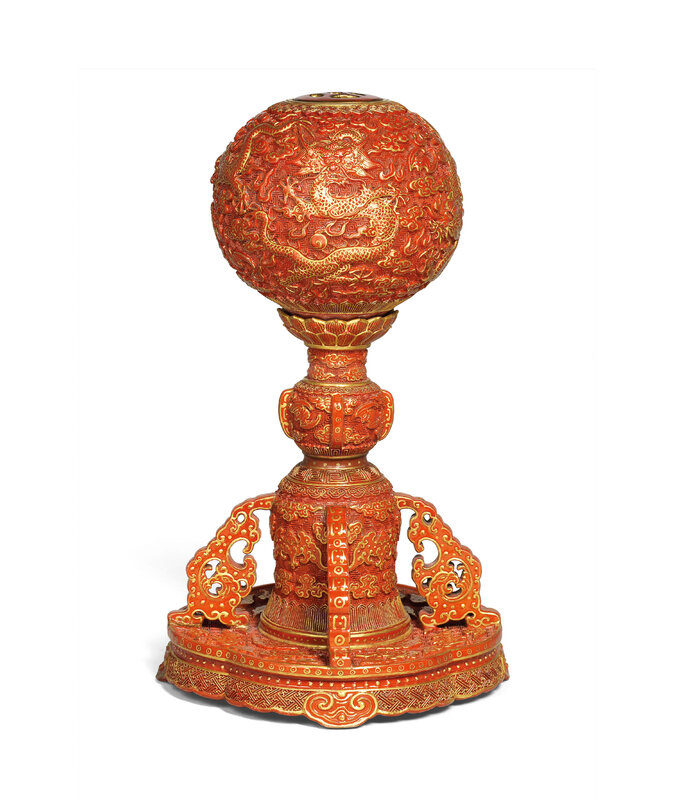 The hat stand is finely executed simulating carved cinnabar lacquer, the globular top is decorated in relief with four five-clawed dragons chasing the flaming pearl amongst bats and cloud scrolls all reserved on a patterned ground. The upper aperture is fitted with a cover in the form of a pierced cash symbol. The upper section rests on a lotus petal base which is supported on a column decorated to the bulbous centre with flanges, the lower bell-shaped section is decorated with four stylised dragon-form spandrels. The entire stand rests on four ruyi-head feet separating a scalloped apron. The exterior and underside is covered with a bright red glaze decorated with gilt highlights.

Provenance: Property of an English gentleman, acquired in the early 20th century and thence by descent within the family
Sold at Sotheby’s London, 16 May 2012, lot 179.

Note: During the Qianlong period, as porcelain was a medium that was relatively easy to control and decorated to high standards of imperial quality, a variety of porcelain wares were produced simulating other materials such as hardstones, cloisonné enamels, wood, bronze, and in this case, lacquer. For a discussion on the virtuosity of the Chinese potters during the Qianlong period in simulating other materials in porcelain, see Soame Jenyns, Later Chinese Porcelain, London, 1971, p. 67.

Compare two very similar hat stands with a six-character gilt Qianlong seal mark decorated with the attributes of the Eight Immortals and famille rosespandrels, one published in Catalog of the Special Exhibition of K’ang-hsi, Yung-cheng, and Ch’ien-lung Porcelain Ware from the Ch’ing Dynasty in the National Palace Museum, Taipei, 1986, p. 139, no. 112, and the other in The Prime Cultural Relics Collected by Shenyang Imperial Palace Museum: The Chinaware Volume - The Second Part, Shenyang, 2008, pp. 188-189.

It can be suggested that the present lot was a source of inspiration for an almost identical Jiaqing-marked piece in the Chinese National Museum, published in Geng Dongsheng ed, Studies of the Collections of the National Museum of China: Qing Dynasty Ceramics, Shanghai, 2006, no. 132.

The Qianlong Emperor appears to be a great admirer of the skill that was required to create complicated pieces that were reticulated and revolved. Hat stands were, therefore, ideal media for potters to display their virtuosity. A hat stand decorated with openwork dragons is held in the National Palace Museum and published in Stunning Decorative Porcelains from the Ch’ien-lung Reign, Taipei, 2008, pp. 212-213, no. 75. For two famille rose hat stands of different design, see Qing Porcelain of Kangxi, Yongzheng and Qianlong Periods from the Palace Museum Collection, Hong Kong, 1989, pp. 428-429, pls. 110 and 111.

For other examples of Qianlong imitation-lacquer porcelain wares, refer to a begonia-shaped porcelain tray in the Shenyang Palace Museum Collection, illustrated in The Prime Cultural Relics Collected by Shenyang Imperial Palace Museum: The Chinaware Volume - The Second Part, Shenyang, 2008, p. 191.