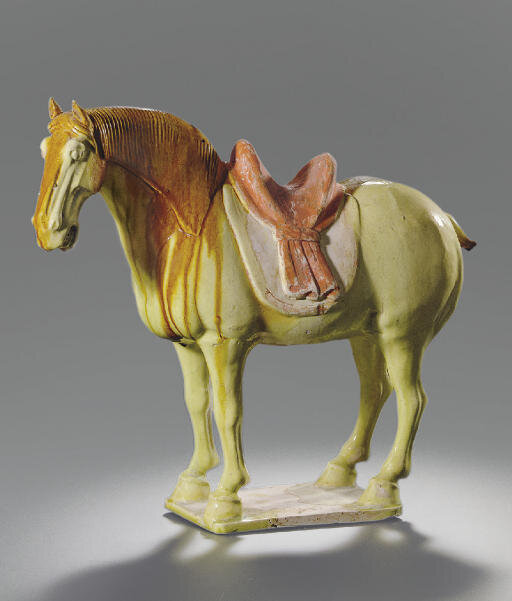 Standing foursquare with head turned slightly to the left, the pricked ears, mane and tip of the tail covered in an amber glaze running down the crisply modeled face and muscular neck, the body covered in a transparent straw glaze, the saddle with orange pigment and the saddle blanket left unglazed revealing the buff ware. Shown striding with head thrown up and back, its mouth open in a bray revealing long pointed teeth and tongue, the tall humps swaying to either side of the body, the areas of heavy hair deeply scored and textured beneath a cream-colored glaze draining in areas onto the chestnut-glazed body.

Provenance: Acquired prior to 1996.

Note: This massive and exceptionally handsome camel is a particularly fine example of the type of figure that was made to go into the tombs of the Tang elite in the first half of the 8th century. Such models, which would have been very expensive to purchase, provided an obvious indication of the wealth of a family who could afford to inter such costly goods with their deceased relative. Not surprisingly, camels have been found among the burial items in a number of the Tang Imperial tombs, as well as some of those belonging to other members of the Tang nobility. However, these models were not simply symbols of wealth, they were also symbols of the way that wealth might have been acquired through trade and tribute along the Silk Route. In the Tang dynasty camels really did live up to the description of them as 'ships of the desert' and were used to transport Chinese goods, including silk across the difficult terrain of the Silk Route to the eager markets of Central Asia, Samarkand, Persia and Syria. Camels are reported to have routinely carried up to 250 kg. in their packs. They may also be seen as symbolic of the cosmopolitanism of the Tang capital at Chang'an. They carried, on their return journeys, many of the exotic luxuries from the west that were desired by the sophisticated Tang court.

The two-humped Bactrian camel was known in China as early as the Han dynasty, having been brought from Central Asia and Eastern Turkestan as tribute. Its amazing ability to survive the hardships of travel across the Asian deserts was soon recognized and Imperial camel herds were established under the administration of a special Bureau. These Imperial camel herds, numbering several thousand, were used for a range of state duties, including the provision of a military courier service for the Northern Frontier. Camels were not only prized as resilient beasts of burden, their hair was also used to produce a cloth, which, then as now, was admired for its lightness and warmth. Even camel meat was regarded as a delicacy, with the hump being noted as particularly flavorsome.

The result of Oxford Authentication Ltd. thermoluminescence test no. C108d25 is consistent with the dating of this lot. 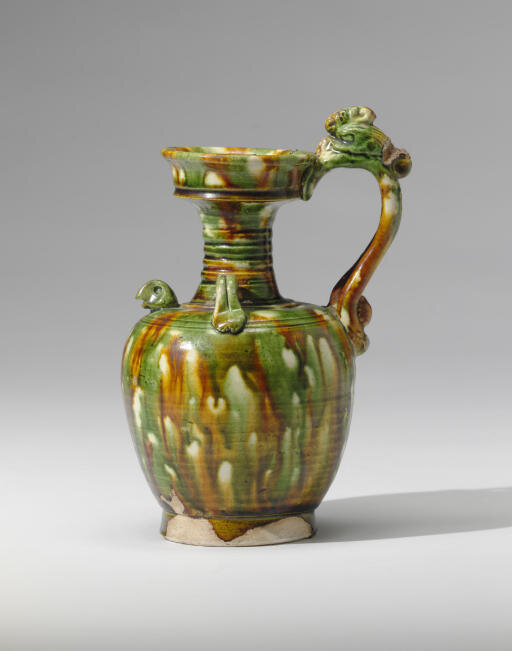 The high shoulder of the ovoid body applied with a small bird's head and scored with a grooved band interrupted by a pair of applied loops and by the terminus of the double-strap handle enclosing a ball at its base and surmounted on top by a phoenix head biting the lip of the galleried rim surmounting the ribbed, reel-shaped neck, covered overall in a splashed and streaked glaze of amber, leaf green and cream color falling irregularly onto the rim of the slightly concave base exposing the buff ware. The shoulder splash-glazed in amber green and clear glaze that falls towards mid-body to expose the buff ware, box. Of rounded octagonal form with a slightly concave top which is decorated with a pattern of marbled ovoid reserves, with some further areas of marbling on the sides, one of which is pierced, the red areas of the marbled ware appearing brown through the transparent amber glaze which partially continues onto the flat base exposing the buff ware, box.

Note: Marbling, jiao tai, became a popular decorative technique on ceramics of the Tang dynasty, and was applied to a number of different forms, including jars, cups, bowls, dishes and censers. Sections of marbling were also inlaid into larger items, such as pillows, for special decorative effect. The marbled appearance could be achieved either by combining clays of different colors when making the vessel, or by using two contrasting slips on the surface of the vessel. In either case the piece was afterwards covered with a transparent glaze, the most popular of which was amber, as seen on the present lot. The shallow dish with steep sides painted in the interior in blue and creamy-white with a central stylized pentafoil floral design, the petals interspersed with blue and creamy-white glazed tri-form buds, all reserved on an amber ground continuing over the slightly inward-curved and rounded rim to the exterior, the base unglazed revealing the buff ware.

Note: The style of painting on this shallow dish is unusual, but can be seen on two Tang shallow dishes with similar amber, cream and cobalt decoration, which are in the Tokyo National Museum. See Sekai toji zenshu, vol. 11, Sui and T'ang Dynasties, Tokyo, 1976, p. 218, nos. 216 and 217.

The result of Oxford Authentication Ltd. thermoluminescence test no. C207m31 is consistent with the dating of this lot. 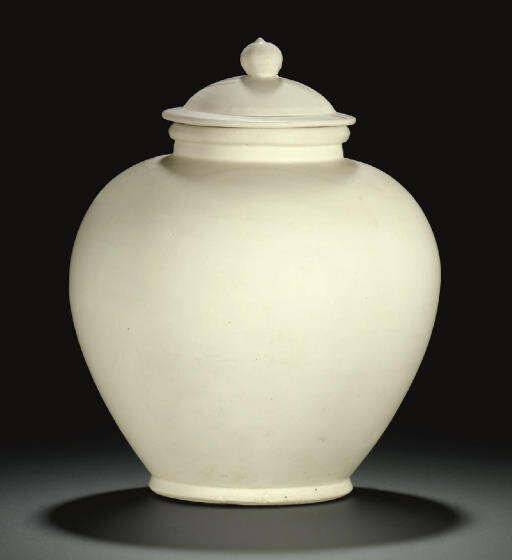 The finely potted rounded jar with short neck and rounded rim, covered with a clear glaze over a white slip, the domed cover with bud finial similarly glazed. The tapering ovoid body surmounted by a waisted neck and rolled mouth rim, covered overall with a straw glaze accented by alternating vertical streaks of green and amber. 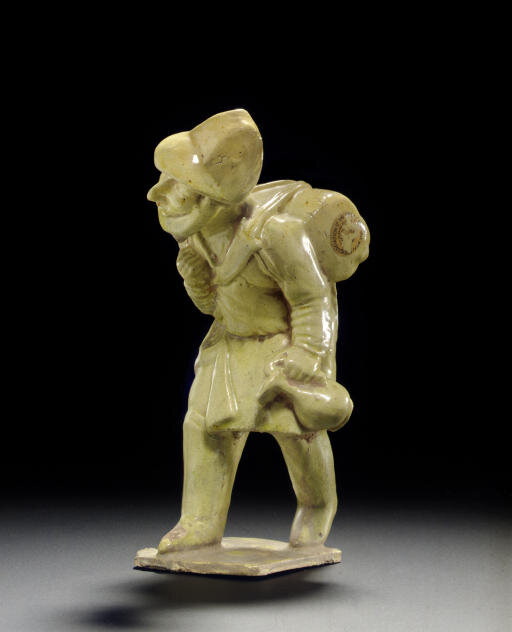 The bearded Semitic merchant modeled as if walking, his body bent over from the weight of the pack strapped over his back, his right hand holding one strap while the other holds a ewer, wearing a peaked hat, belted tunic and tall boots, covered with a straw glaze of yellow tone.

Property from the Collection of Neil and Sharon Phillips The elegant rider wearing a green and amber-glazed robe and black-painted boots, the face finely detailed with eyes and eyebrows rendered in black line above the red lips, with hands positioned to hold the reins of the amber-glazed horse standing foursquare with head alertly turned to the side, the hogged mane, blaze, saddle blanket and docked tail covered with a cream glaze, stand. Of yaozhou type, the sides flaring outwards above the foot before angling upwards towards the rim, the interior decorated with daubs of blackish-brown glaze forming abstract floral sprays on a white slip within a pentagonal border of glaze continuing over the rim to form another pentagon on the exterior atop further white slip falling in an irregular line to expose the fine-grained light grey ware, box and stand.

Note: A dish of this type was excavated in 1986 from the kiln site of the Tongchuan kiln at Huangbaozhen, Yaozhou. This excavated dish, which is now in the Archaeological Research Institute of Shaanxi province, is illustrated in Gifts of the Tang Emperors - Hidden Treasures from the Famen Temple, Tokyo, 1999, p. 110, no. 69, where it is dated to the 9th century. Several dishes of the same form, decorated using the same technique as the current dish, also excavated from the Tongchuan, Yaozhou kiln, are illustrated in Yaozhou Kiln, Xian, 1992, where they are attributed to the Tang dynasty. Two more such dishes are illustrated in Masterpieces of Yaozhou Ware, Museum of Oriental Ceramics, Osaka, 1997. One was excavated at Huangbaozhen in 1990 and the other is in the collection of the Tokyo National Museum. They are both dated to the 9th century and are illustrated as nos. 122 and 12 respectively. 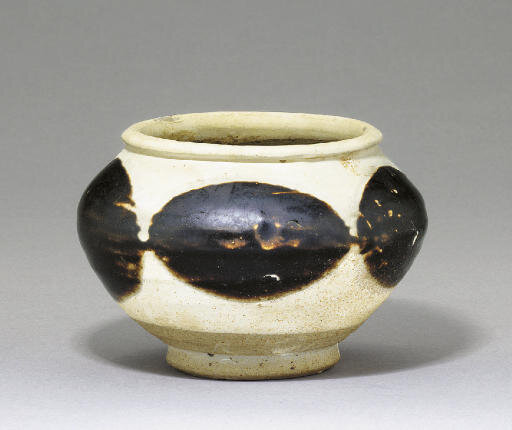 The body flaring upwards before tapering towards the lipped rim, decorated under a clear glaze with five brown ovals against a ground of white slip falling short of the beveled ring foot to expose the pale grey granular ware.

Note: This jar was probably made at the Yaozhou kilns in Shaanxi province, and a small jar of rather more compressed form with similar decoration, excavated from the Tongchuan, Yaozhou kiln, is illustrated in Yaozhou Kiln, Xian, 1992, where it is attributed to the Tang dynasty. The technique used to decorate this jar, the jar being turned by hand as it is dipped into the brown glaze, may also be compared to that used on a jar of rather different form in the collection of the Tokyo National Museum. The Tokyo jar is illustrated in Masterpieces of Yaozhou Ware, Museum of Oriental Ceramics, Osaka, 1997, no. 11, where it is dated to the Tang dynasty, 9th century.