LONDON.- This landmark exhibition of major loans from museums and private collections throughout the world shows how Gauguin used portraits primarily to express himself and his ideas about art.

Although he was fully aware of the Western portrait tradition, Gauguin was rarely interested in exploring his sitters’ social standing, personality, or family background, which had been among the main reasons for making portraits in the past.

From sculptures in ceramics and wood to paintings and drawings, an extraordinary range of media for a National Gallery exhibition, visitors will see how Gauguin interpreted a specific sitter or model over time, and often in different guises. A group of self portraits in the exhibition, for example, show how Gauguin created a range of personifications including his self-image as Jesus Christ. Together with his use of intense colour and his interest in non-Western subject matter, his approach had a far-reaching influence on artists throughout the late 19th and 20th centuries including Henri Matisse and Pablo Picasso.

'The Credit Suisse Exhibition: Gauguin Portraits' shows how the artist – inspired by his time spent in Brittany and French Polynesia from the mid-1880s to the end of his life in 1903 – became fascinated by societies that to him seemed close to nature. With their folk tale heritage and spirituality, these communities appeared to him to be far removed from the industrialisation of Paris.

Gauguin’s inspiration to visit French Polynesia was partly drawn from the exotic novels of Pierre Loti (whose naval training included a stay in Tahiti), his photographs of Borobudur sculptures, and Pacific exhibits he had seen at Paris’s Exposition Universelle in 1889. At the same time his own upbringing in Peru allowed him to think of himself as someone who stood outside the European tradition, a ‘savage,’ while the European artistic and literary circles in which he moved also helped shape his views towards Tahiti and the Marquesas.

Gauguin’s life and art have increasingly come under scrutiny, especially the period he spent in South Polynesia. The Gallery aims to explore this controversial subject matter in the exhibition interpretation and accompanying programme and to join conversations now taking place that consider Gauguin's relationships and the impact of colonialism through the prisms of contemporary debate.

Featuring over fifty works, the exhibition includes paintings, sculptures, prints, and drawings many of which have rarely been seen together. These include works from the Musée d’Orsay, Paris, France; The National Gallery of Art, Washington, DC, USA; The Art Institute of Chicago, USA.; The National Gallery of Canada; The National Museum of Western Art, Tokyo, Japan; and The Royal Museums of Fine Arts of Belgium.

With pictures from his early years as an artist through to his final visit to the South Seas, the first room of the exhibition is dedicated to self portraits; the most numerous of all Gauguin’s paintings. By making himself his chief subject and by assuming different personalities these images show Gauguin constantly reinventing himself. Included in this room is a rough, grotesque self-portrait head with his thumb in his mouth demonstrating his interest in non-Western iconography and art, and also his radical experimentation in different media ('Anthropomorphic pot', enamelled sandstone, 1889, Musée d'Orsay, Paris). Paul Gauguin, 'Portrait of the Artist with the Idol', about 1893. Collection of the McNay Art Museum Bequest of Marion Koogler McNay 1950.46 © McNay Art Museum, San Antonio. 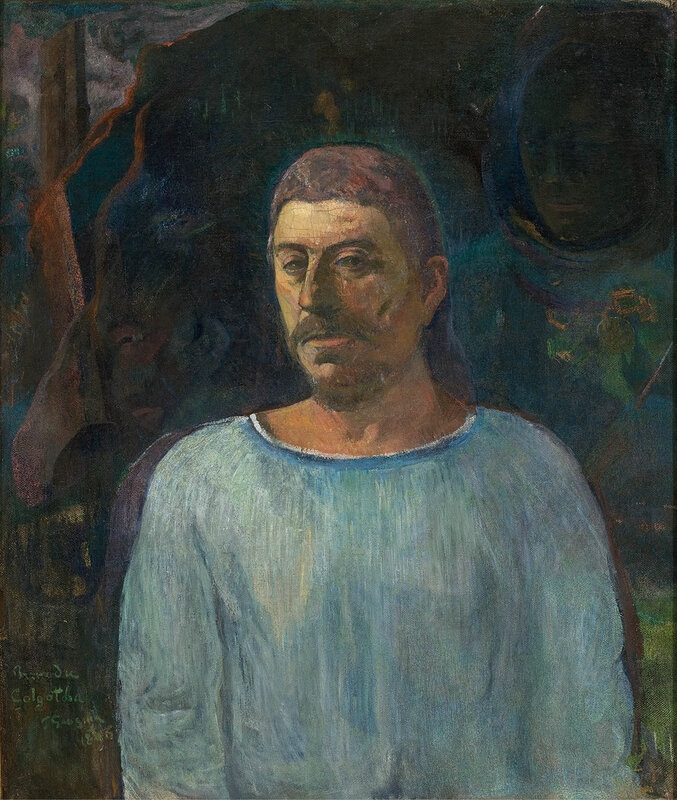 Room 2 is devoted to the period he spent in Brittany (1884–-91) where, in the remote village of Le Pouldu, he turned his back on his life as a Paris stockbroker to become the leading figure of a new artists’ colony. This room also contains portraits of some of the friends he had made in Paris and members of his family including 'Mette in Evening Dress', 1884 (The National Museum of Art, Architecture, and Design, Oslo). In paintings such as 'Be Symbolist: Portrait of Jean Moréas' (1890–1, Talabardon & Gautier, Paris) and 'Young Breton Woman', (1889, Private Collection) Gauguin started to push the boundaries of portraiture by eschewing its usual conventions of resemblance, flattery, and coherence of time and space. 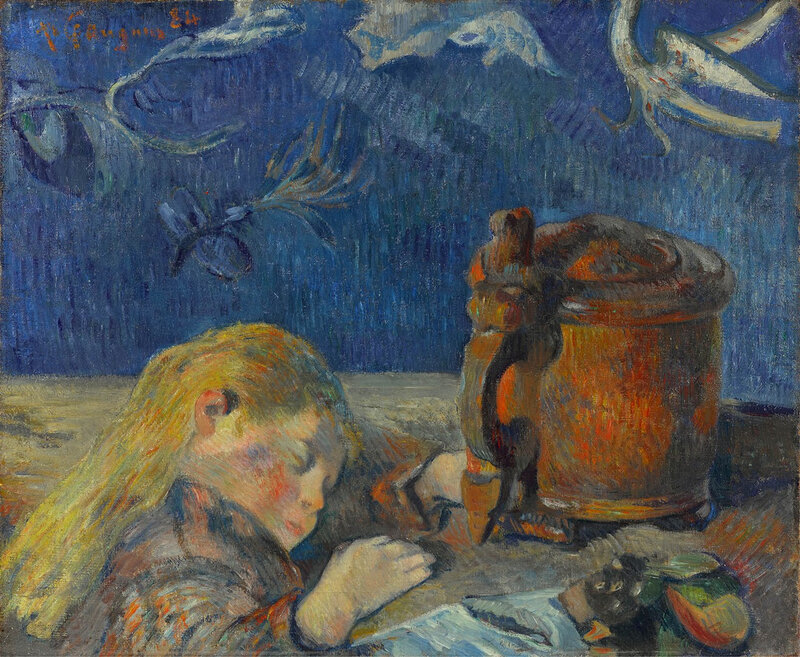 Paul Gauguin, 'Still Life with Profile of Laval', 1886. Indianapolis Museum of Art, Samuel Josefowitz Collection of the School of Pont-Aven, through the generosity of Lilly Endowment Inc., the Josefowitz Family, Mr. and Mrs. James M. Cornelius, Mr. and Mrs. Leonard J. Betley, Lori and Dan Efroymson, and other Friends of the Museum, 1998.167. Image courtesy of Indianapolis Museum of Art at Newfields. 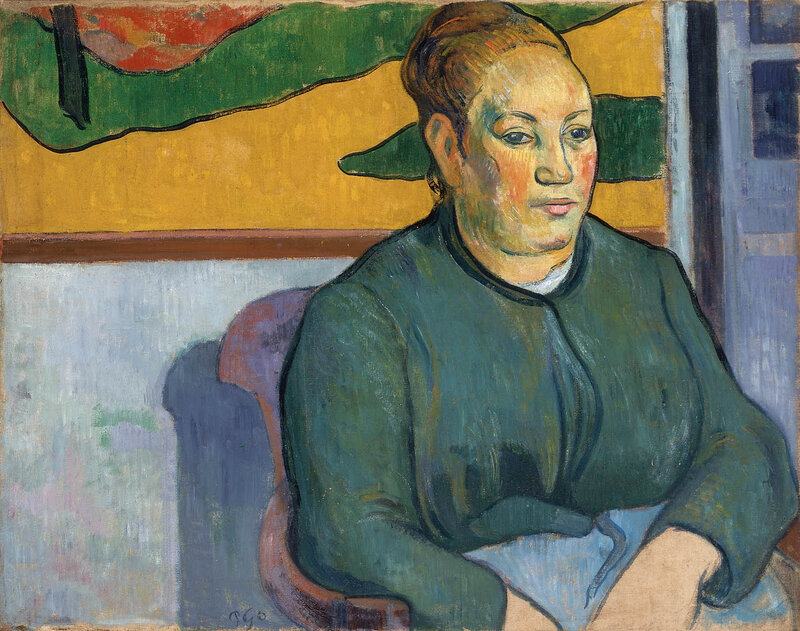 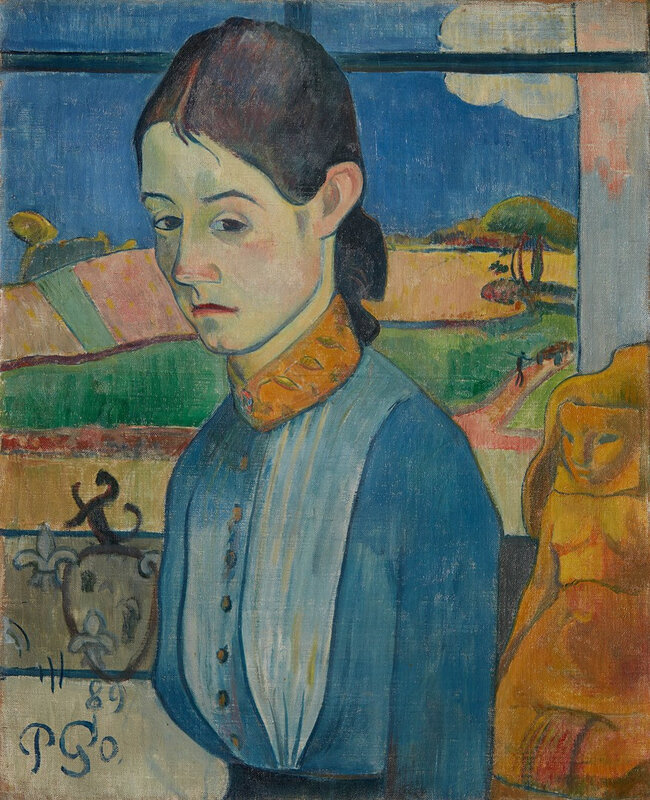 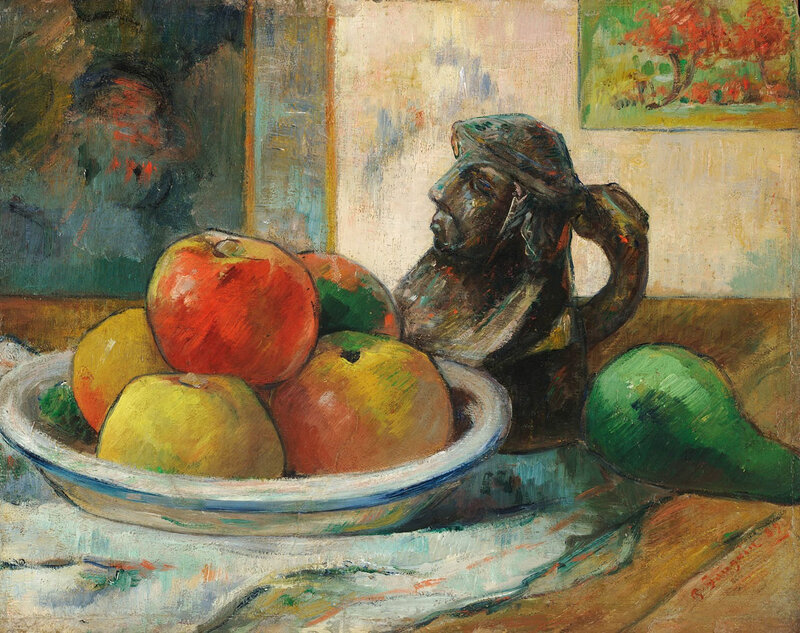 Gauguin’s fraught relationships with fellow artists are explored in Room 3, particularly two key friends who, in spite of falling out with him, remained as portrait subjects for the rest of his life: Vincent van Gogh and Meijer de Haan (1852–1895). A group of portraits of de Haan shows how he became a symbolic cipher within his work that far outlived their friendship (and the sitter himself), stretching the possibilities for portraiture into something new across different media, such as the wooden bust of de Haan (1889–90, National Gallery of Canada). Room 4 covers Gauguin’s first Tahitian trip (1891–3) where he sought an escape from ‘civilisation’ yet always with an eye to France, and how he was trying and failing to break into the Parisian art market from a distance. As well as including paintings of Teha’amana a Tahura, this room also tracks his continued experiments in different media, which made direct reference to the indigenous objects now surrounding him, in works such as 'Tehura (Teha’amana)' in wood, (1891–3, Musée d'Orsay, Paris); and 'Arii Matamoe (The Royal End)', (1892, The J. Paul Getty Museum, Los Angeles). 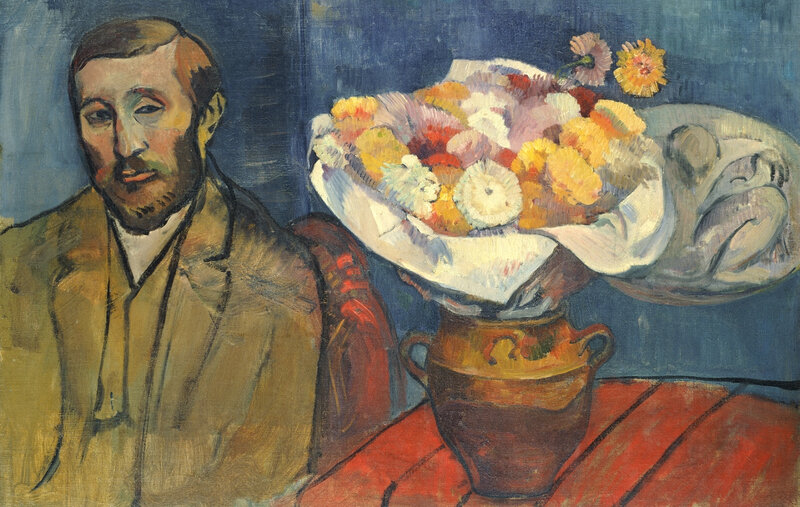 Featuring his return to Paris and Brittany and his second stay in Tahiti (1893–5), Room 5 also includes works containing distinctly Tahitian imagery. In a portrait made in Brittany, a young Breton woman in prayer is shown wearing a Tahitian missionary dress ('Young Christian Girl', 1894, Sterling and Francine Clark Art Institute, Williamstown, Massachusetts, USA); while in 'Self Portrait with Manao Tupapau', (1893–4, Musée d'Orsay, Paris) can be seen the painting 'Manao Tupapau (The Spirit of the Dead Watching)', the print of which is on display (1894, National Gallery of Canada). Room 6 has a selection of portraits in which Gauguin used symbolic objects, arranged into still lifes, to stand in for absent figures. These surrogate portraits had been part of Gauguin’s repertoire from the 1880s, but this room shows how they took on increasing significance during the isolation of his later years. They include proxy portraits of Van Gogh, his former friend who had been dead for a decade, which depict the blooms from sunflower seeds sent from France (such as 'Still Life with ‘Hope’', 1901, Private collection, Milano, Italy); Gauguin may have been the first to understand that sunflowers were Van Gogh’s signature motif and he would be famous for them. The final room of the exhibition is devoted to Gauguin’s late portraits. Despite a recurring illness and a decline in the quantity of his output, the portrait remained essential to Gauguin’s art in his final years on the Marquesan Island of Hiva Ooa. His use of portraits to express his role in local politics is reflected in the form of the wooden carved sculpture made for the home he built himself caricaturing the local bishop, as a lecherous devil (Père Paillard, 1902, National Gallery of Art, Washington, DC). His last self portrait, perhaps the simplest and most direct of all, probably made shortly before the end of his life, aged 55, brings the exhibition to a close (Self Portrait, 1903, Kunstmuseum Basel).