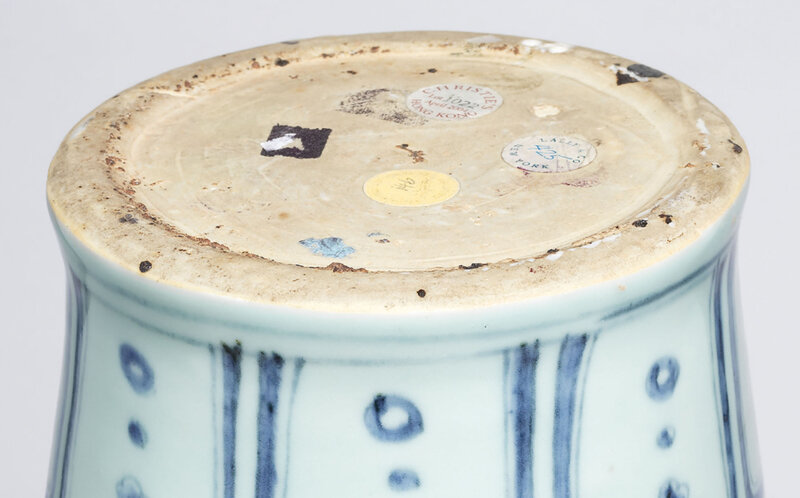 The vase is well potted with rounded shoulders and a tapering baluster body on a slightly flaring foot. It is finely painted in inky-blue tone depicting a peony scroll borne on an undulating leafy stem bearing four large blooms alternately shown in profile and pendent, between narrow bands of classic scrolls. The shoulders are painted with a peacock and a peahen with outspread wings amid a continuous peony meander bearing smaller blooms below a further narrow classic scroll. The base is encircled by a band of large upright lappets, each enclosing a pendent trefoil, dot and ring. The vase is covered under a glossy transparent glaze with a pale blue tinge, with the exception of the recessed base.

Note: Two circular samples have been taken out from the outer ring of the recessed base for TL testing. The result of the test from the Research Laboratory for Archaeology, Oxford, no. 866c83 (3 February 1997) is consistent with the dating of this lot.

Also known as jingping, meiping vessels were originally used as a wine container, and first became popular in the Song dynasty. The meiping, or ‘prunus vase’, was thought to be ideal vessel for displaying a single prunus branch, for the narrow mouth of the vase provided a perfect complement to the slender stem of the branch, see the discussion by Xu Zhiheng, Yinliuzhai shuoci [Remarks on Porcelain from the Studio of a Wine Lover]. The form of the Yuan meiping deviates from the slender and elongated shape of that from the Song dynasty, developing into the rounded and voluminous style. This style continued into the early Ming, and provided the prototype for the meiping form during the high Qing.

The present vase is sturdily potted with the painting executed skilfully and fluidly, and it has been unusually well preserved. The classic scrolls on the shoulders and upper body, as well as the upright petals around the base, are very similar to those found on a meiping in the Shanghai Museum, illustrated in Art of Yuan Blue-and white Porcelain, Shanghai, 2012, pp. 84-85, no. 13. (fig .1) The ‘peacocks and peonies’ design is a classic repertoire of Chinese porcelain design. Peacocks symbolise purity and noble character, while peonies are associated with wealth and auspiciousness. For a similar depiction of peacocks amid a peony scroll but in mirror image, compare a Yuan blue and white jar in the National Museum of Iran Ardebil Shrine, see Chinese porcelain collections in the Near East III, Hong Kong, 1981, p. 75, no. A24; p. 99, no. A24.