London Art Week holds its third Winter edition from Sunday 1 to Friday 6 December in locations across Mayfair and St James’s. During the week, some 35 leading specialist galleries and the major auction houses will stage special exhibitions and talks. Open to art collectors, curators and the public the exhibitions span 5,000 years of art, from antiquity to the twentieth century, with a core focus on Old Masters and pre-contemporary art.

Among the highlights is a lunchtime talk at the National Gallery on Monday 2 December, the second LAW has held with this partner museum’s popular public programme. Speakers confirmed are Dr Francesca Whitlum-Cooper (National Gallery,  Associate Curator of Paintings 1600-1800), Emanuela Tarizzo (Gallery Director of Tomasso Brothers Fine Art), and Andrew Fletcher (Sotheby’s, Senior Director, Head of Old Master and British Paintings). The talk will look behind the scenes at the day-to-day life of gallerists, curators and collectors.

At The Weiss Gallery, Van Dyck in England: The King’s Principal Painter & his Caroline Legacy. A spectacular array of portraits include a gorgeous three-quarter length from Van Dyck’s late English period and, depicting Charles I and Henrietta Maria, a full-length pair from his studio. Other artists included are Adriaen Hanneman, John Michael Wright and Sir Peter Lely, who all, in their own distinct ways, followed faithfully in Van Dyck’s footsteps. 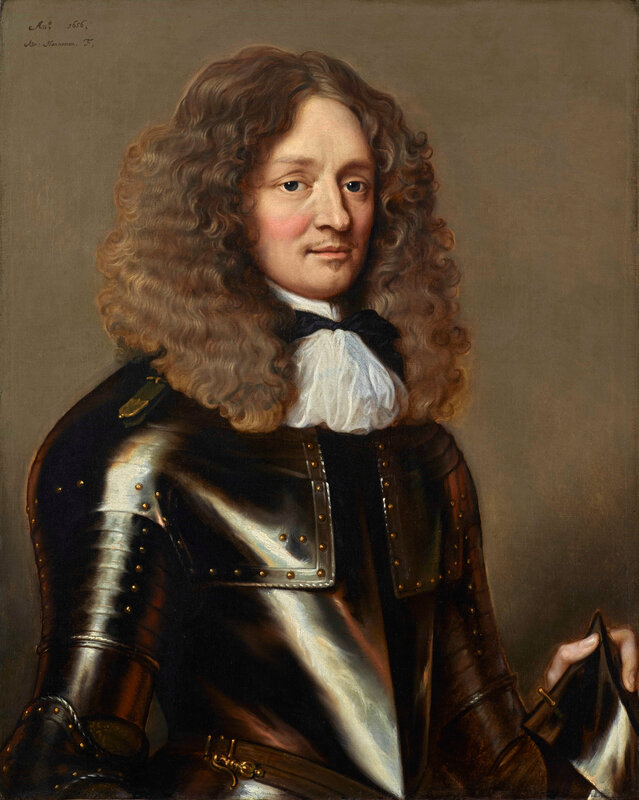 A special exhibition on Retablos: Spanish Paintings from the 14th to 16th Centuries is at Sam Fogg, in collaboration with Galeria Caylus from Madrid. The galleries are pooling their in-depth knowledge of Spanish paintings from the medieval and Renaissance eras in their first collaboration. The result is a major new survey exhibition on Spanish late-medieval painting, curated by Dr. Alberto Velasco Gonzàlez of the Universitat de Lleida. Oliver Forge & Brendan Lynch Ltd present Ottoman Patronage and European Merchandise: Works of Art from Turkey and France, 1530-1820, featuring two important watercolour views of Constantinople by A.-I. Melling circa 1800, a group of European and Ottoman works of art, and a private collection of Iznik tiles. 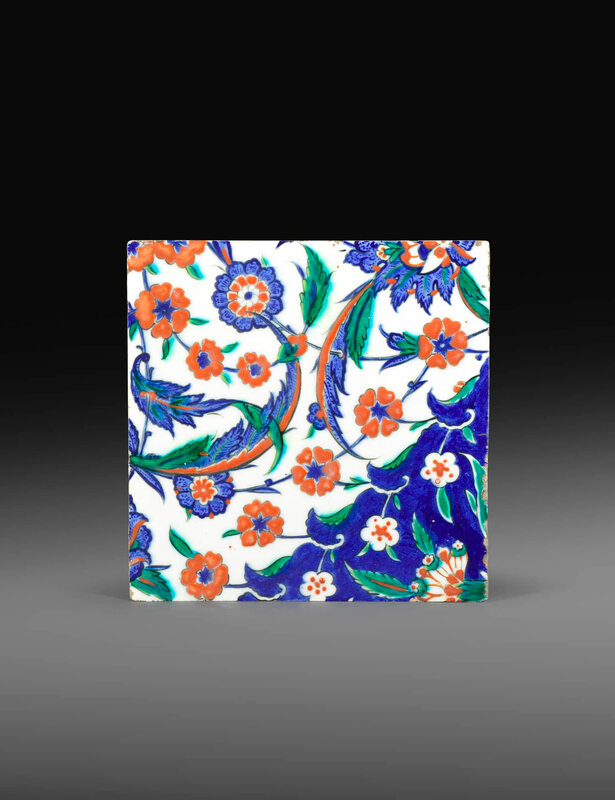 Iznik pottery tile, Turkey, 1570-80. Painted in underglaze cobalt, viridian green and bole red on a white ground, with a spray of roses and saz-leaves, a corner reserved on a cobalt ground, 24.5 by 24.5 cm © Oliver Forge & Brendan Lynch Ltd 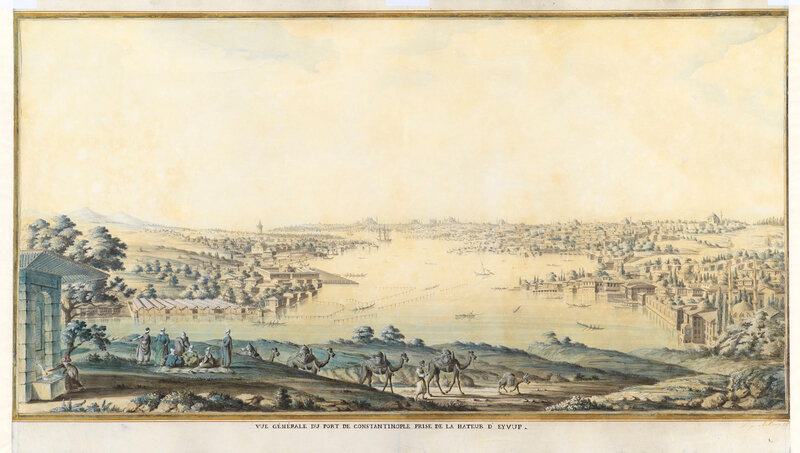 Magick Land – An Italian Journey at Karen Taylor Fine Art (exhibiting at Charles Beddington Ltd, specialist in Venetian paintings) shows the work of watercolourists inspired by Italy. Centrepiece of the show is an important drawing by the Welsh artist Thomas Jones (1742-1803). The reputation of his strikingly original Italian work has soared in recent years after several exhibitions reinstated his standing as one of the most idiosyncratic and innovative eighteenth-century British artists. In his lively and informative memoirs Italian Journal, Jones expressed his joy at travelling through Italy, recording the “new and uncommon Sensations I was filled [with] on my first traversing this beautiful and picturesque Country ... It appeared Magick Land”. John Mitchell Fine Art investigates a similar period, but closer to home. ‘Romantick Situations’ - Castles and the Picturesque in eighteenth-century Britain stems from Julius Caesar Ibbetson’s description of Morlais Castle in south Wales, which he was taken to see by his patrons, the Bute family, in 1789. As Britain prospered at home and prevailed overseas, Georgians increasingly felt a sense of uninterrupted connection with their country’s ancient and mostly mysterious past. To them the huge castles in strategic and often dramatic settings stood for the turbulence, drama and territorial upheavals of the Middle Ages. For landscape painters already awakening to the stirring scenery to be found across the British Isles, its majestic castles, abbeys and ruins had an irresistible allure and contributed to the rise of the Romantic Movement. The exhibition includes paintings and watercolours by Richard Wilson, Paul Sandby, Ibbetson, Edward Dayes, William Hodges, Alexander Nasmyth and others, with prices ranging from £2,500 to £75,000. Colnaghi approaches the theme of Resurrection through paintings, sculpture and objects of different age and origin: not just the Judeo-Christian tradition of Jesus and Lazarus, but also Osiris in Ancient Egypt and Orpheus in Ancient Greece for example.

Laocoon Gallery exhibits one hundred works representing the female figure - wives or lovers, virgins or prostitutes, holy mothers like the Madonna or man-eating she-devils. Ranging from paintings, drawings and pastels to bronzes, ceramics and terracotta, the works are by female, and male, Italian artists of the 20th Century. XX: The Female Gender in Twentieth Century Italian Art, curated by Monica Cardarelli of the Galleria del Laocoonte, Rome will show how women were seen in the art of the 1900s. XX not only represents the gene that determines a woman’s sex, but also the 20th Century, which saw more changes than any other in the role, status, appearance and condition of women, both in life and in the imagination, as art has recorded it. 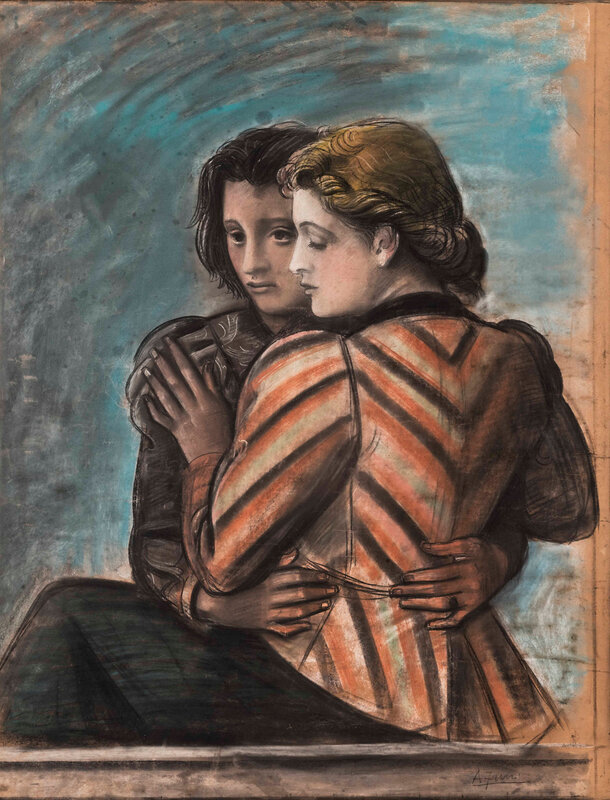 Peggy Guggenheim is the subject at Ordovas which marks 80 years since her little known London gallery, Guggenheim Jeune, closed prior to the outbreak of World War II. The exhibition Peggy Guggenheim and London reveals new insights into her early experience as an art dealer and her original plan to establish a modern art museum in the capital. Whilst she needs no introduction for her contribution to modern art, her formative years as a gallerist have been relatively overlooked.

Guggenheim Jeune, situated in a former pawnbroker’s at 30 Cork Street, operated for just eighteen months between January 1938 and June 1939. While its lifespan may have been brief, its influence was considerable, both on the art world at the time and on Peggy herself; by the time the gallery closed, she was a self-confessed “art addict”. This exhibition will showcase Guggenheim’s parallel collecting interests in Abstraction and Surrealism through a display of works by Jean (Hans) Arp and Yves Tanguy, artists that she collected and championed. It also sheds new light on her earliest experiences in the art world, including unpublished floor plans of the gallery and details of the artists, advisors and lovers who assisted her original ambition, thwarted by the war, to open a museum of modern art in London.

Olivier Malingue Ltd presents L’Empreinte, a group exhibition including works by Jean Dubuffet, Marcel Duchamp, Max Ernst, Yves Klein, Man Ray and Ed Ruscha. Imprint can be an embossed relief, as in Ed Ruscha’s Ghost Station (2011), where absence becomes presence through the fibres of a sheet of paper. Or it can be the impression obtained by rubbing a textured surface, as in the frottage drawings and paintings by Ernst, Penrose and Oppenheim, a technique Ernst started using in 1925. The exhibition includes several contemporary interpretations of the “imprint”, such as a mural by the Paris-based artist Thu-Van Tran. 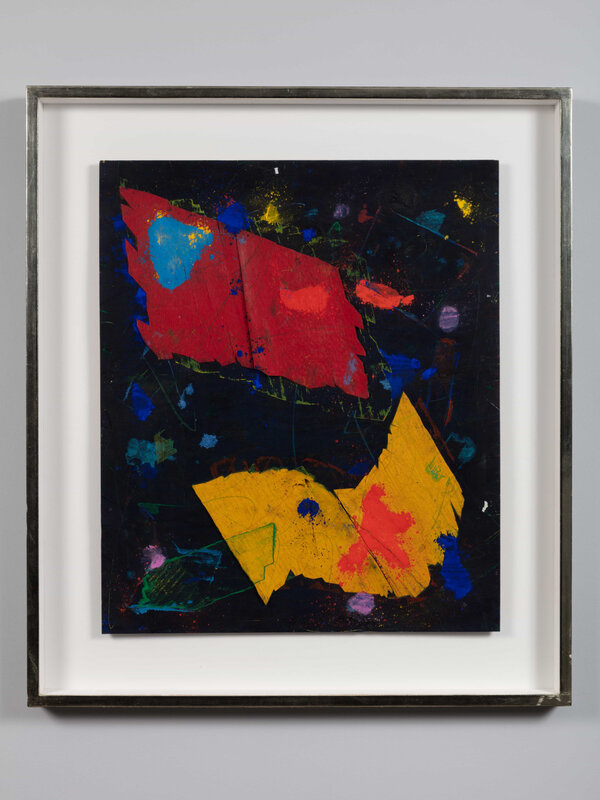 As is now tradition, Stephen Ongpin & Guy Peppiatt join forces for their annual Winter exhibition of One Hundred Drawings and Watercolours, featuring works dating from the 16th to the 20th century and priced between £500 and £12,000. As usual the gallery will be hung Salon style, with drawings and watercolours from floor to ceiling. A fully-illustrated catalogue accompanies the exhibition. 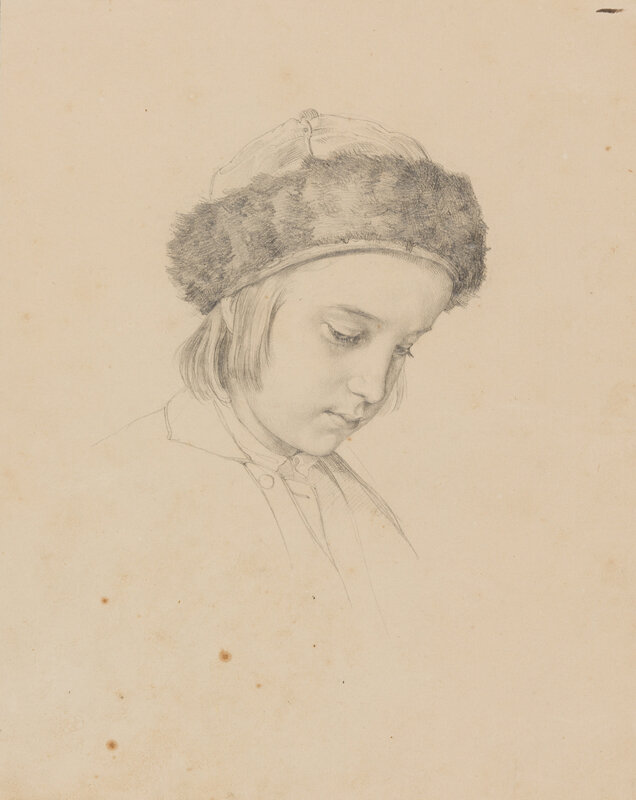 Highlight works for sale include:

Among recent acquisitions at Lowell Libson & Jonny Yarker is a brown ink and paper drawing of Elizabeth Siddal Having Her Hair Combed by Dante Gabriel Rossetti with an inscription on the reverse by William Michael Rossetti: ‘By Gabriel - I think a watercolour was made of this c. 1855’. Ariadne Galleries will offer Face of Serapis, an important depiction of a cult god from Hellenistic Egypt, circa 1st century BC. This finely wrought marble, from a renowned US collection, is a work that manifests a strangely beguiling presence. A seasonal offering at Bagshawe Fine Art is Wild Turkey, an oil on canvas by Wenzel Peter (1745-1829). Born in Bohemia (now the Czech Republic), Peter moved at the age of 22 to Rome where he built a sound reputation. His area of expertise was that of animal painting and he soon came to the attention of some of the most significant patrons of art in Rome. One of his earliest successes was his 1779 fresco of animal paintings on the walls of the Casino di Villa Borghese for Prince Marcantonio Borghese III. By the early 19th century he had become the foremost animal painter in Italy, with his pictures entering many important private collections. His monumental canvas Adam and Eve in Paradise (now in the Vatican Museum) shows some 240 species of animal from different parts of the globe. The turkey in the present picture is clearly worked from the one that appears prominently in the centre foreground of Adam and Eve in Paradise. London Art Week Winter 2019 has a new opening day, a Sunday, and on Monday 2 December the new LAW symposium will launch, at the National Gallery following the lunchtime talk (mentioned above). Taking place from 2.30 - 5.30pm, the symposium will comprise a number of panel discussions committed to exploring three subjects defining the art world today.  Speakers will include international museum directors, curators, collectors and journalists.