LONDON.- On 22 October 2019, thirty-six works from the legendary Najd Collection together sold for a record total of £33.5 million, with nine further records broken for the greatest exponents of the genre. Following this major market-defining moment, Sotheby’s is set to offer a further selection of rigorously-painted historic scenes of the Middle East as it was experienced by intrepid explorers in the nineteenth-century. Over thirty rarely-seen works by leading artists including Jean-Léon Gérôme, Gustav Bauernfeind and Ludwig Deutsch will go on view at Sotheby’s London from 27 March, ahead of the auction on 31 March.

“Once in a while, a private collection has the power to redefine and reinvigorate a genre of art in the eyes of a new generation and in the market. Last year when we exhibited all 155 works from the prestigious Najd Collection, we were thrilled to witness a resounding enthusiasm for Orientalist art, and so it is with great pleasure that we are able to offer a second tranche of luminous works by its most famous exponents.” – Claude Piening, Sotheby’s Head of 19th Century European Paintings, London. 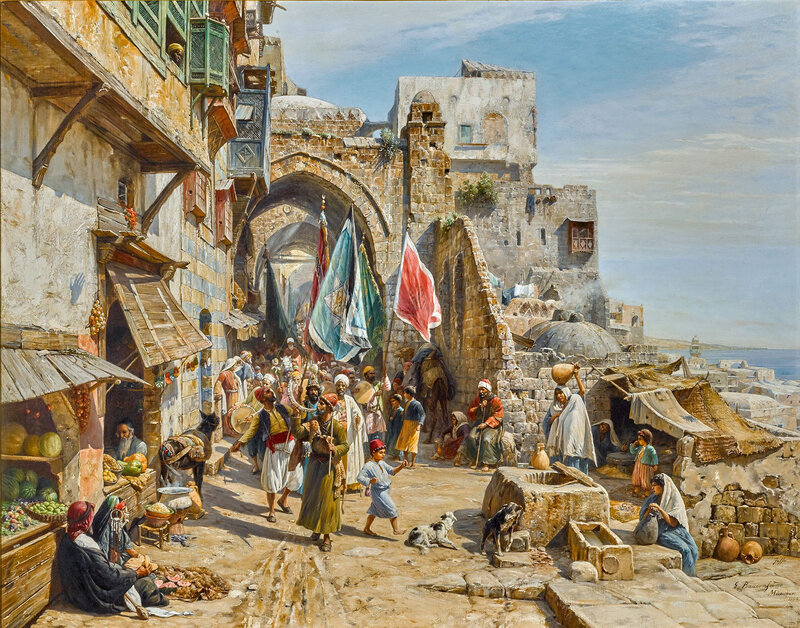 In a letter to his mother, Bauernfeind remarked that ‘you have to live in a country like this a long time before becoming even superficially familiar with all it has to offer.’ Bauernfeind painted this work upon his return to Germany following his third and final trip to Palestine. It marks the culmination of his ambitions for his canvases of Jaffa.

No detail escaped Bauernfeind’s eye, and he took delight in the streets, buildings and mosques of the city, as well as ‘the procession of characters’ who populated them. In this monumental painting, a group of dervishes and Sufis leads a religious procession, possibly of pilgrims embarking on the annual Hajj to Mecca.

This work comes to auction for the first time in over forty years, following the record £3.7 million achieved for the artist’s Market in Jaffa, which was sold from the Najd collection last year.

At the sale of select works from the Najd Collection last year, Deutsch’s The Tribute sold for a record £4.3 million, which doubled the previous record set for the artist in 2013. In this sale eight more Deutsch works will be offered. Appearing at auction for the first time, The Palace Guard depicts a proud and richly decorated sentinel standing alert. He wears glistening gold embroidered slippers and bears a cluster of gold weapons, while his Persian steel helmet and shield are perched on the floor beside him. The painting bears witness to Deutsch’s highly accomplished technique. For example, the entrance which incorporates many of the architectural elements from the Mosque of Sultan Hassan in Cairo. This emotive portrait of a thinker is set in the Green Mosque in Bursa, Anatolia, which is famous for its turquoise and green hexagonal tiles. Though the artist would certainly have had recourse to photographs as study aids – he amassed a notable collection by the 1890s – his portraits surpass the illusion of a photographic snap-shot and took weeks or perhaps months to complete. The noble and elegant subject of The Scholar may have been inspired by Deutsch’s encounters with scholars at Cairo’s famous university, El Azhar Madrassah. The figure’s distinguished dress reflects his status and wealth, since only the most expensive black dyes stood up to scrutiny under bright light. With an expression of intense concentration, the scholar sits back to reflect on the passage he has just read in his leather-bound Qur’an. 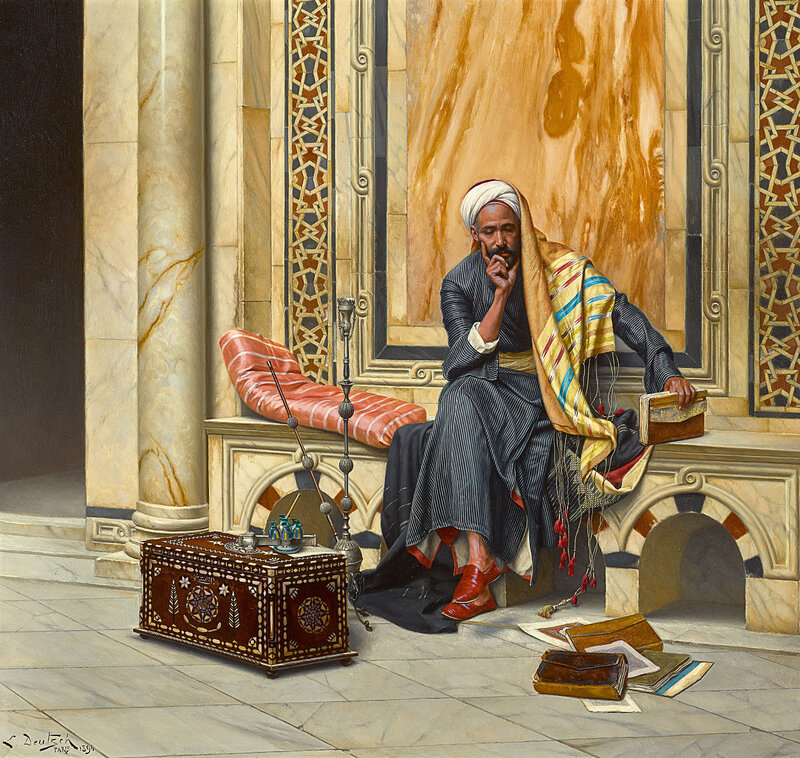 By exploring the theme of literacy in Egyptian culture, Deutsch is both celebrating its glorious history and underlining its importance in both secular and religious life, at a time when modern innovations in the printing process were threatening the traditional role of professional scribes.

In the first tranche of lots offered from the Najd Collection last year, Gérôme was represented by five works, one of which, the exceptional and cinematic Riders Crossing the Desert, set a new artist record at £3.1 million. Exhibited at the Paris Salon of 1857, Gérôme painted this masterful canvas when he was at the height of his career following his successful inaugural trip to Egypt in 1856. The work depicts handcuffed prisoners led under guard across a sandstorm to their uncertain fate. Gérôme paints the plight of the conscripts with an objectivity that evokes compassion and, with great skill, he contrasts the precision of the figures in the foreground with the prisoners in the distance who are almost completely engulfed by the dust storm.

Having witnessed such a scene in Asyut, the artist based his composition not only on his usual sketches but also on photographs he had taken. Arnauts, or bashi-bazouks, were of particular interest to Gérôme. They populated his work from the late 1850s onwards. Mercenaries in the Ottoman army, they hailed from Albania and the Balkans and were deployed across the Empire, including in Cairo, where the artist would have encountered them wearing their distinctive white pleated kilts. In 1890, Ernst travelled to Constantinople, a trip that had a profound impact on his artistic output. He preferred to focus on Turkey’s traditional Muslim heritage and traditional skills and trades, despite the capital of the Ottoman Empire experiencing rapid modernisation and westernisation. Working from photos or his own sketches and memory, he made a series of paintings of mosques, and this work depicts the façade of Sultan Selim’s tomb, located in the precincts of Hagia Sophia. In this richly finished work, a man stands at the entrance of a palace, yielding weapons to discourage any trespassers. An interesting mix of architectural and ethnographic elements, the composition incorporates colourful tiles and Moorish decorations, which collectively recall the melding of styles of the Alhambra palace in Granada.

The Najd Collection
Precious records of the history of the Islamic world, Orientalist paintings provide a unique window into a realm that has forever changed, capturing in technicolour detail every aspect of life in the region.

In the early to mid-1980s, one collector, driven by an informed passion to build a panoptic picture of society of the region a century or more ago, assembled the 155-strong Najd Collection. Eager to look beyond the confines of their own Western experience, the artists represented throughout the Najd Collection travelled to and spent time in North Africa, the Ottoman Empire and the Middle East to portray first-hand what they saw and experienced. The legacy of their work has provided an invaluable documentary narrative of regions that have since been transformed by modernisation and, in some cases, conflict.

Artists in the Muslim world were not working in the same representational, figurative tradition as Western painters. Therefore, beyond the detail captured in Orientalist paintings, very few other visual records from the period capture the mores and manners of this part of the world in the nineteenth century.