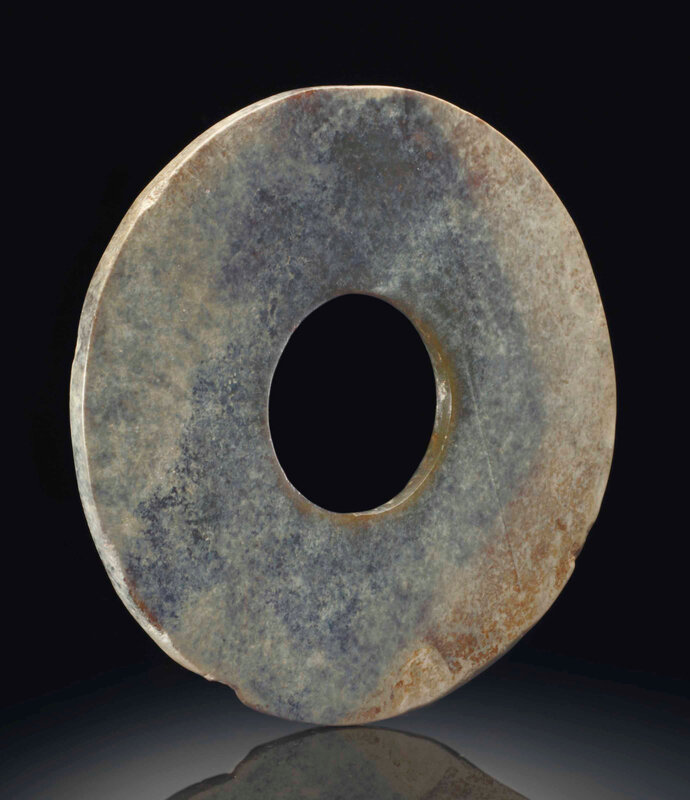 The bi has a smooth, unadorned surface and the blue-green stone has areas of opaque buff color. Together with a small altered jade curved pendant, late Shang/early Western Zhou dynasty, that is carved at one end with the head of a bottle-horn dragon. The stone is completely altered and opaque and has traces of cinnabar, boxes.

Note: Compare the slightly taller (23.3 cm.) cong, also dated to the Neolithic Period, Liangzhu Culture, c. 2500 BC, which appears to be of very similar stone, illustrated by J. Rawson in Chinese Jade from the Neolithic to the Qing, British Museum, London, 1995, p. 128, no. 3:5. Compare, also, another taller (28.5 cm.) cong, dated to the Neolithic Period, 3rd millennium BC, in the Freer Collection and illustrated in "Neolithic Chinese Jades in the Freer Gallery of Art," Orientations, Selected Articles from 1983-1996, p. 10, no. 17; and one in The Palace Museum, Beijing, exhibited at Seibu Bijutsukan, Tokyo, in 1982, and illustrated in Shikinjo no shiho, Pekin kokyu hakubutsuin ten, Tokyo, 1992, p. 103, no. 68.