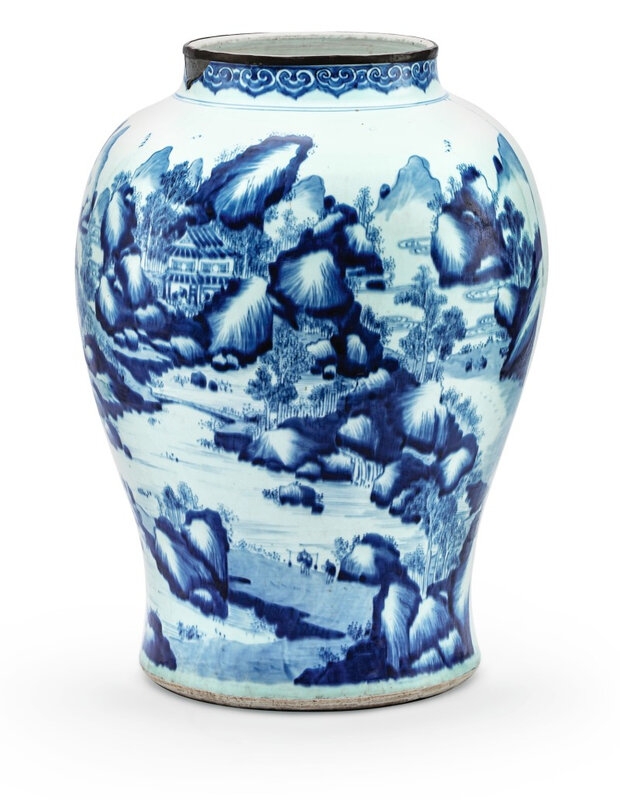 Note: The vase is inscribed with the prose poem Zui Weng Ting ji, ‘From the Hut of the Drunken Old Man’ by Ouyang Xiu (1007-1072), one of the famous works of Chinese literature and considered as key text of the guwen literary genre that propagated a simple and clear style of prose, inspired by classical texts. Written in 1046 from exile in Anhui, Ouyang writes about his personal joys of sharing simple meals and drinking with friends, but above all celebrates the beauty of nature around his hut.

The intense cobalt blue of this vase and the painting style with dramatic shading to depict ragged cliffs are also characteristic of this period late in the Kangxi reign; another vase in the Palace Museum, similarly decorated with figures in a landscape and inscribed with a date equivalent to 1715, is published in Gugong Bowuyuan cang wenwu zhenpin quanji/Qinghua youlihong The Complete Collection of Treasures of the Palace Museum. Blue and White Porcelain with Underglazed Red, Shanghai, 2000, vol. 3, pl. 28. See also another vase inscribed with the same poem, sold at Christie’s Paris, 13th December 2017, lot 32.