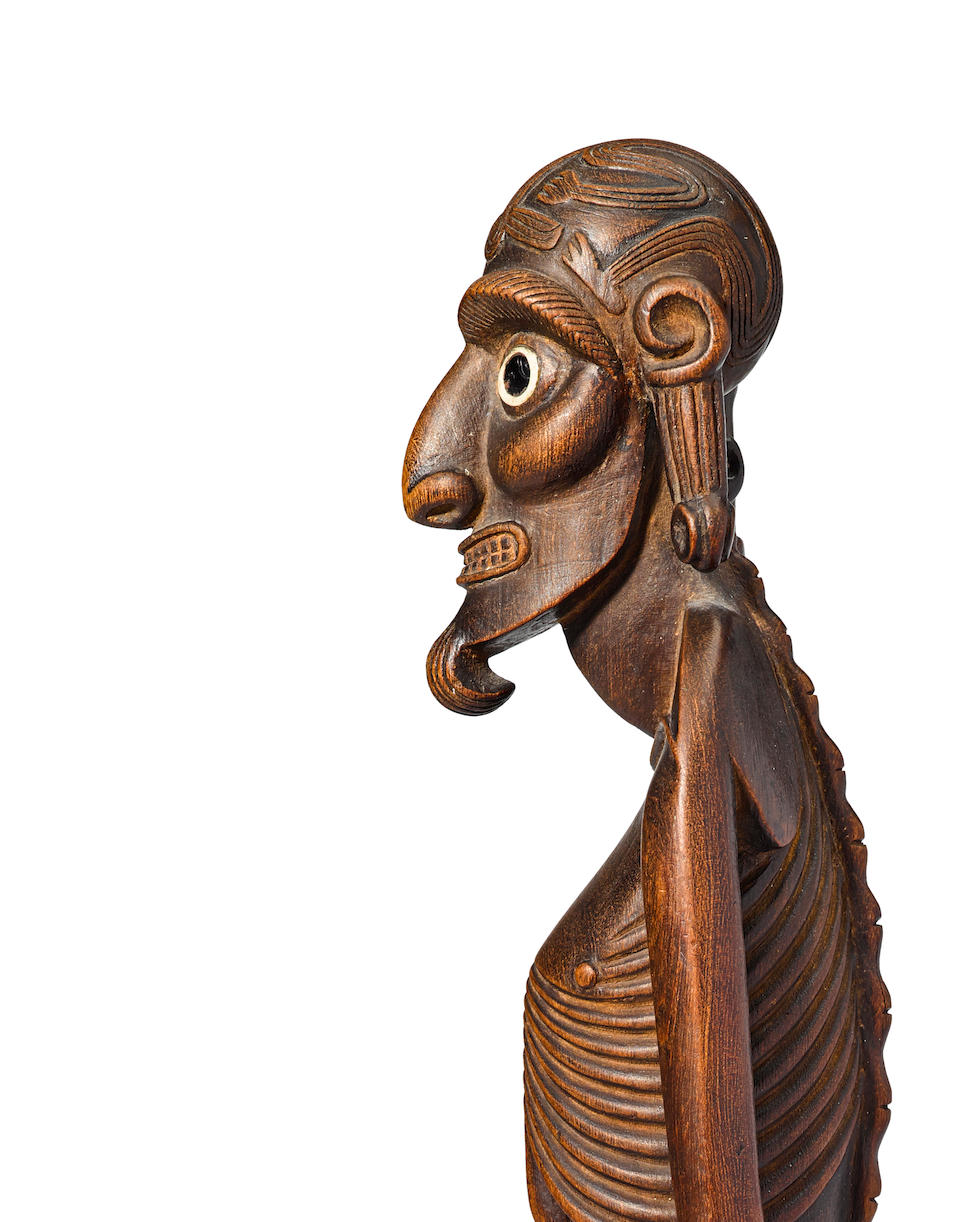 Los Angeles - The mystery of Easter Island's great stone idols has captivated the world for centuries. Less known, but equally fascinating are the island's wooden carvings, moai miro, curious human and combined human-animal forms, including birds, lizards and sea eels. Perhaps the most enigmatic of these figures are the moai kavakava, whose name derives from the word for figure, moai, and kavakava, the Rapa Nui (Easter Island) word for ribs. A superlative and very rare example of this art form – known as the Blackburn statuette after its current owner – is to be offered at Bonhams African and Oceanic Art sale in Los Angeles on 2 July. It is estimated at $800,000-1,000,000.

Bonhams African and Oceanic Art consultant Fredric Backlar said: "The artists who carved moai kavakava had reached their finest aesthetic achievement by the 1820s, probably just before the time this figure was created. It is incredibly rare. Only around 85 such statuettes carved before the islands conversion to Christianity in 1868 are believed to have survived. Presumably collected as a gift or by exchange during the first half of the 19th century, this archetypal figure, with its delineation of details, dynamism and profoundly mysterious physical presence, is a magnificent example of one of the most classic artistic creations, not only from Easter Island and Oceania, but from the world of art as a whole."

It is not known exactly what function moai kavakava performed, though most academic researchers agree that they were probably used to ward off evil spirits. Records from missionaries on Easter Island from the middle to late 19th century indicate that moai kavakava were brought to important ceremonies and danced or worn by men and women, suspended from their bodies attached by human hair cords through the enlarged pierced vertebrae behind the neck. Some accounts witnessed as many as twenty figures worn around the body of one individual at a time. When not in use, they were wrapped in tapa and suspended from the interior wall of the Rapa Nui home, perhaps as protective devices. 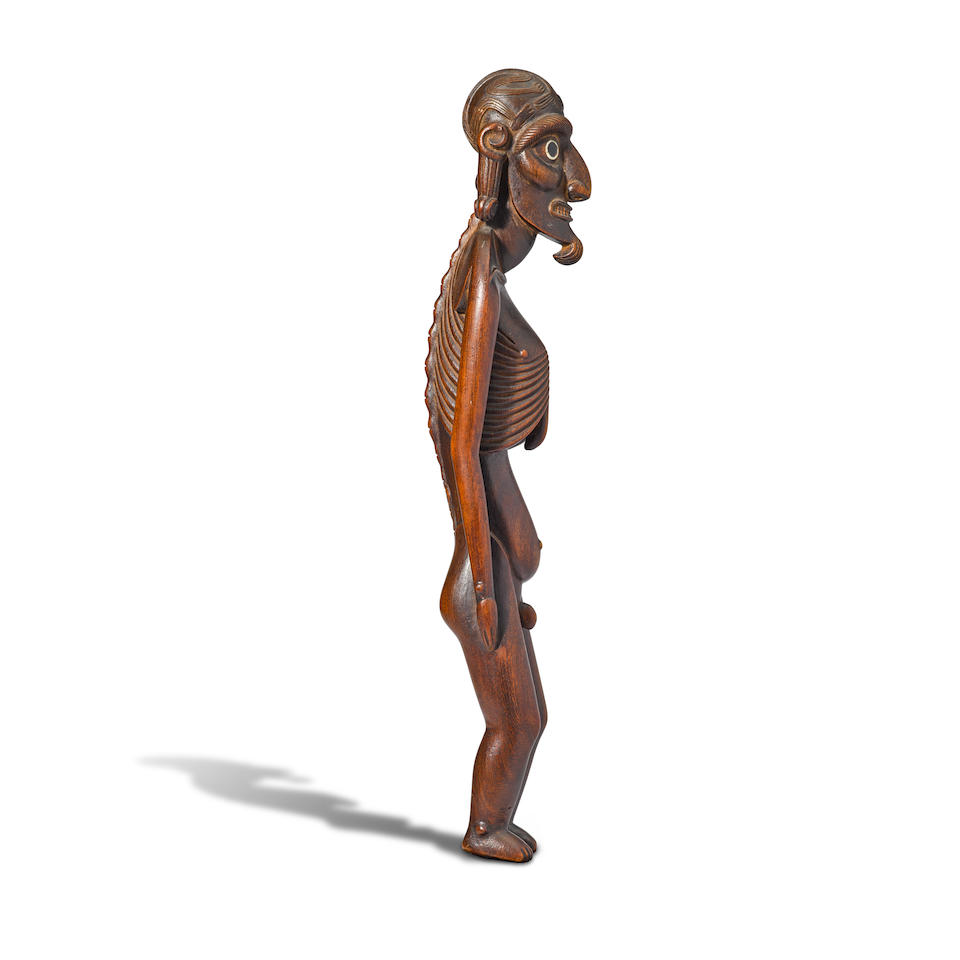 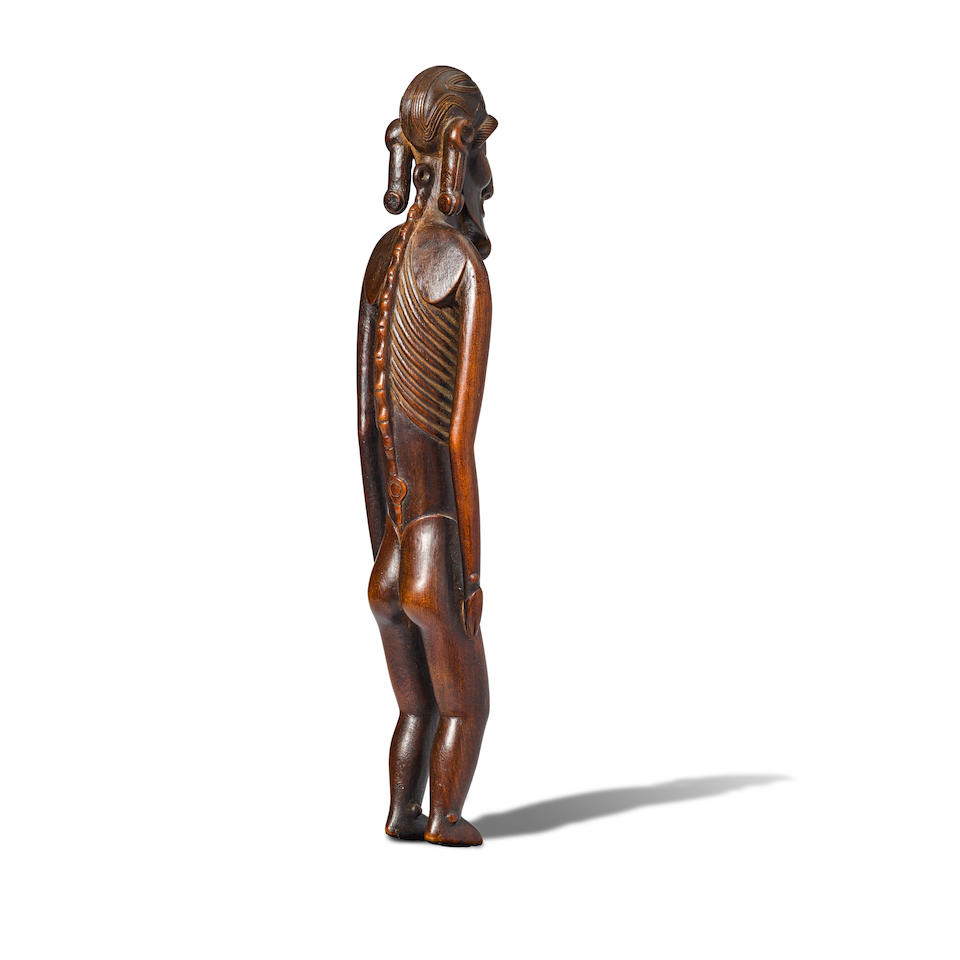 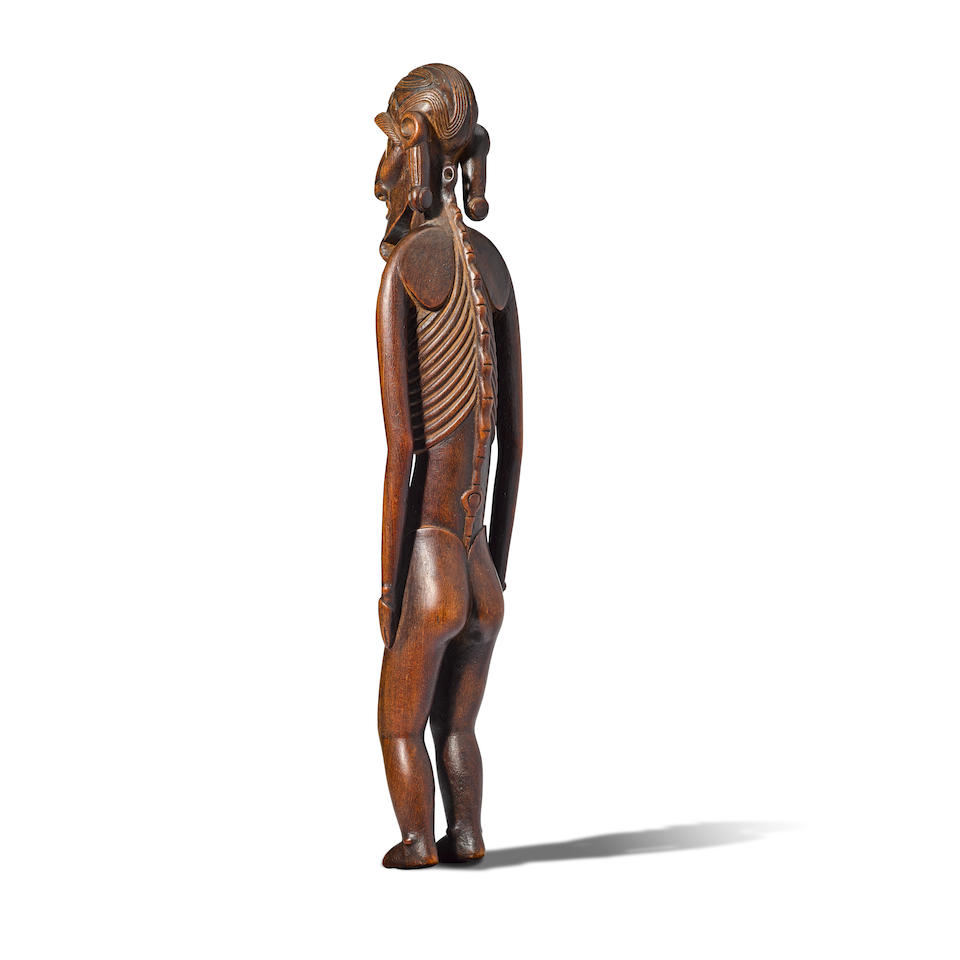 Property from the Collection of Mark and Carolyn Blackburn, Honolulu, Hawaii.

Botanical identification report and x-rays, supervised by Michel and Catherine Orliac and completed in 1993 confirming the wood type as Sophora toromiro.

A letter from Terence Barrow dated 4 June 1985 accompanies the lot.

Around the second half of the first millennium, all accounts suggest that Hotu Matua, a Polynesian king from an island called Marae Renga, arrived at the shores of Rapa Nui. It was not until Easter Sunday in the year 1722, when Dutch navigator Jacob Roggeveen captained the next vessel to arrive at the island's shores, leaving with the name they gave it – Paasch Eyland. Easter Island is the most isolated island in all of Oceania and forms the southeastern point of the Polynesian Triangle, with the Hawaiian Islands to the northwest and New Zealand to the southwest. Living in complete isolation with relative stability and doubtless happiness for around 1000 years, the people of Easter Island, the Rapa Nui, were constructing stone platforms around the island by the 12th century and the world-renown gigantic monolithic stone statues (moai) they supported by the 14th century.

In 1770, a well-organized Spanish fleet arrived on Easter Island, certainly bearing gifts for exchanges, as by the time they left, three Rapa Nui chiefs had signed annexation treaties. Four years later, Captain James Cook arrived, his crew exhausted and needing relief on their search for a non-existent southern continent. By the early 19th century, whaling ships and seal-hunters had begun populating the Pacific, increasing the number of visits, exchanges and appearances of new diseases on the island. By 1862, a Peruvian armada arrived taking over 1400 Rapanui as slaves back to Peru.

Like their Polynesian ancestors, the arts of Rapa Nui included wood carvings, textiles, music, dance, and tattooing of the human body. The medium the artists are most famous for are the figural wood carvings, moai miro, curious human and combined human-animal forms, including birds, lizards and sea eels. Perhaps the most enigmatic of these figures are the moai kavakava, whose name derives from the monumental stone moai figures around the island, and kavakava, the Rapa Nui word for ribs--literally "image with ribs." Characterized by an emaciated appearance, the moai kavakava is a human male whose main features immediately appear cadaverous, with exposed rib cages, visible and clearly-defined spinal cords with pronounced vertebrae, and heads with a pronounced nose, chin and cheekbones, and rounded, trance-like eyes.

Records from missionaries on Easter Island from the middle to the late 19th century indicate that moai kavakava were brought to important ceremonies and danced or worn by men and women, suspended from their bodies attached by human hair cords through the enlarged pierced vertebrae behind the neck. Some accounts witnessed as many as twenty figures worn around the body of one individual at a time. When not in use, they were wrapped in tapa and suspended from the interior wall of the Rapa Nui home, perhaps as protective devices. The precise function of the moai kavakava is uncertain. Michel and Catherine Orliac suggest, "that one of the principal functions of the kavakava, like that of Asiatic dragons, was to protect the family that possessed them by terrifying and harrying the evil spirits that might come to bother them." (Trésors de l'lle de Pâques, 2008, p. 121) Adrienne Kaeppler suggests these figures "incorporated genealogical metaphors of social importance and were used in peaceful contexts that focused on family, agriculture, and fertility." (Splendid Isolation – Art of Easter Island, 2001, p. 34) Alfred Metraux proposes these "wooden figures showing protruding bones were intended to represent the spirits of dead people." (Ethnology of Easter Island, 1971, p. 260)

Regardless of its function, the artists who carved moai kavakava had reached their finest aesthetic achievement by the 1820s, probably just around the time this figure was created. Presumably collected as a gift or by exchange during the first half of the 19th century, this archetypal figure, with its delineation of details, dynamism and profoundly mysterious physical presence, is a magnificent example of one of the most classic artistic creations, not only from Easter Island and Oceania, but from the world of art as a whole.

Easter Island owes its fame to its stone statues (moai). This material has ensured the sustainability of the moai. For a millennium, around a thousand of these giants have inhabited the island. But only vestiges of the countless number of ancient wooden sculptures remain even though the Polynesians, who had arrived on Easter Islander by the eleventh century, installed dozens of statuettes in each household. Time took its toll on most of these.

Before the arrival of Europeans in the 18th century when the Easter Islanders numbered only several thousand, each generation carved at least this many wood sculptures: rank badges, ceremonial accessories, and images of the gods. Passed down from one generation to the next, these sacred objects accompanied the deceased in their burial. Between 1774 and 1871 some of these treasures, through exchanges between sailors and islanders, were taken to private collections and museums in Europe and America.

Currently worldwide, there are just over five hundred carved sculptures that were created before the conversion to Christianity, which marked the end of their production (1868). On Easter Island today, there are none left. Eighty-five survivors from ancient times--eighty-five "ribbed" statues (moai kavakava) like the Blackburn statuette--form half of the corpus of anthropomorphic figures.

The Moai Kavakava and the Blackburn Statuette

The first moai kavakava is said to have been the work of the mythical hero Tuu ko Ihu, companion of Hotu Matua, first king of Easter Island. After a chance encounter with two spirits, Tuu ko Ihu sculpted their image in charred branches; these ghosts had appeared to him in the form of an overdeveloped rib cage with visible ribs (ribs = kavakava in Easter Island language).

Tuu ko Ihu originated the guild of sculptors, who also held the rank of priests, because any talent was the sign of a divine intervention. The Blackburn statuette is obviously the work of a sculptor who benefited not only from this supernatural aid, but also from the lessons of a prestigious master.

The tree picked to carve the Blackburn kavakava, a toromiro (Sophora tormiro), was considered sacred due in part to its yellow flowers and the red color of its wood; moreover, its harshness evoked that of warriors and its rot-resistance that of immortals. This tree, naturally gnarled and winding, was planted sheltered from the wind when it had to provide straight sections to sculpt the insignia of power: long sticks, ua and double-blades, ao and rapa. The torso parts were chosen to represent the contours of the lizard men (moko) and the curved body of the spectres, the kavakava.

Four styles can be identified in the carved sculptures of Easter Island: archetypical (until the end of the 18th century?), Classic (until the 1860s), late (1870-1920) and modern (after 1920). Unlike three-quarters of the "classic" style kavakava, generally markedly curved forward, the Blackburn kavakava is straightened without being perfectly erect; this is one of its main features. Indeed, by its technology, its morphology and its symbolic overloads, it fits perfectly into the "classic" style, which groups most of the objects collected until the 1870s.

The classic style is defined by a simplification of the modelling of the muscles and the skeleton; certain details are geometrized, such as the wing of the spiral ears, the collarbones, the hemispherical malleoli of the wrists and ankles. However, the perineum of the Blackburn kavakava is treated with meticulousness and, if its scrotum is absent, its sex, small, is sculpted with delicacy and precision. The toes are delineated by a rectilinear groove incised in the soles of the feet.

The Blackburn kavakava follows the canons of "classical" statuary rhythm, where the head forms about a quarter of the total height of the body, the navel being placed at around half of this height. The anatomical consistency is perfect: the anterior and posterior surfaces are connected by the perineum without height anomaly.

The material, shape, dimensions and posture of the sculptures bear the main details of the nature of the entity represented. Beyond the morphology, the color and other elements foreign to the simple anatomical description probably indicate its status and its function. Tradition does not provide any information on these questions. Some of the classical statuettes are covered with a very light, varied dark brown dye, often rubbed off on the reliefs by wear, but which persists in the concavities of the Blackburn statuette; the teeth of the latter, like those of other classic statuettes, are impasted with an orange coating.

Other symbolic additions are integrated into the morphology of the kavakava: in the lumbar region of the Blackburn statuette, a disc surrounded by a circle fits intimately into the spine. Identical or very close designs also exist, in the same position, on lizard men, bird men, moai tangata and moai papa. Finally, an element undoubtedly essential to define the identity of the sculpture or that of its sponsor (family, social class, corporation?) are various glyphs traced or carved on the top of the skull, the most sacred part of the body.

Like many other statuettes of the classical style, the skull of the Blackburn kavakava wears a champlevé glyph. The technique is very elaborate here: the edges of the design result from the very precise carving of intersecting millimeter secants; the internal lines are formed of very regular incisions; the bottom or remainder of the champlevé has been perfectly polished. The represented entity is a bird-man, central figure of the Easter Island religion, avatar of the supreme god Makemake, celebrated during the spring festival on the ceremonial site of Orongo. His image with big feet and big hands was carved in bas-relief on the rocks of this sanctuary before the construction of the house where, until 1867, the priests met to sing the immemorial texts of the rongo-rongo script.