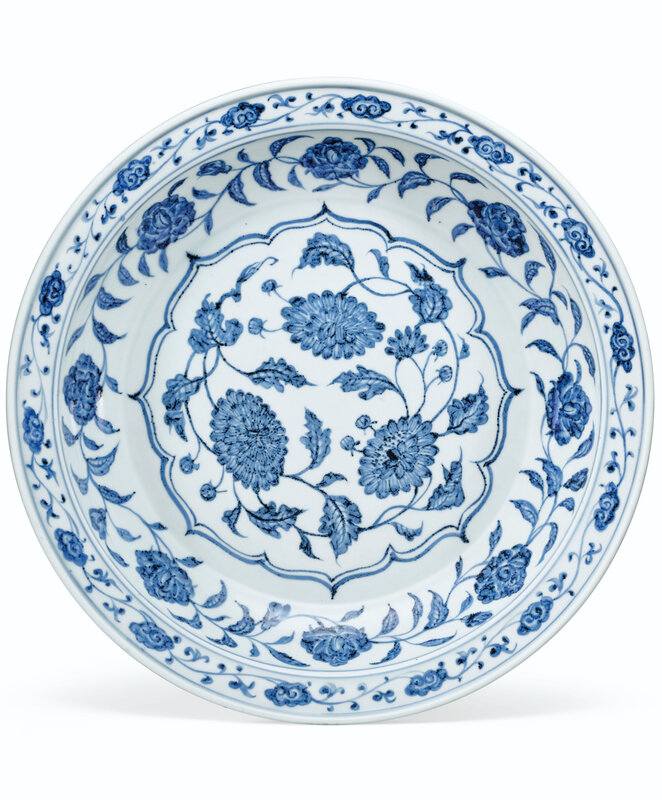 The dish is decorated in rich cobalt blue characteristically 'heaped and piled' with chrysanthemum scroll within a shaped border, beneath peony scroll in the well and further scroll on the everted rim. The reverse is decorated with further flower blossoms.

Walter Francis Brown (1930-2014) was a native Texan who, after graduating from the University of Texas, established Delray Oil, Inc., in partnership with his uncle, for the exploration and production of oil and gas in Texas and later in Western Canada with W. F. Brown Exploration Ltd. Both companies are located in San Antonio, Texas, and remain active under continued family ownership. Mr. Brown discovered Chinese art in the early 1970s after attending an auction at Christie’s in New York, and then he began exploring art auction catalogues from London, Paris, Stockholm, Amsterdam, New York and Hong Kong. He loved studying and looking at the arts of Asia. He particularly responded to the subtle and restrained aesthetics of Chinese Song ceramics, and the powerful extravagance of Ming and Qing porcelains. For over 40 years in addition to his prolific oil and gas businesses, he regularly made his way through a plethora of auction and dealer catalogues which he enjoyed studying with great enthusiasm. He was an eager buyer and acquired works of art from auctions and dealers throughout the world. Walter and his wife, Lenora, were generous philanthropists and were inspired by many public Asian art collections, especially the Musée Guimet in Paris. They established the Asian collection at the San Antonio Museum of Art in Texas. Their vision resulted in the creation of an encyclopedic collection of the arts of China and Japan, to the delight of the people of Texas and visitors from around the world. Over the years, Mr. Brown established enduring friendships with many of the major collectors, dealers and museum professionals of the day, and his death in 2014 has left a void in the listing of long time, traditional Asian art collectors in America.

Note: This type of dish was a very popular export to India and the Middle East, as evidenced by the large numbers published in collections in Istanbul and Tehran, and the large number of copies made locally in earthenware. They are found with a variety of floral decorations and sizes, with rounded wells, everted rounded rims and barbed rims. For a discussion of the Asian empires that prized these dishes, see the note to lot 1551 in this catalogue, an important blue and white barbed ‘lotus’ dish with the collector’s mark of the fifth Mughal emperor, Shah Jahan (r. 1628-1658).

It is extremely rare to find a Yongle dish decorated with a continuous vine around the everted rim rather than cresting waves such as the present dish. The border on this dish is particularly beautifully rendered, incorporating ruyi heads in the vine. A related dish of the same size, with a similar decorative scheme and a vine around the rim, from The Fine Arts Museums of San Francisco, was sold at Christie’s New York, 19 March 2009, lot 712. An example of the more commonly found version with cresting wave border on the everted rim was sold at Christie’s Hong Kong, 29 May 2007, lot 1451.

A dish with the same design as the present lot, of slightly smaller size, is in the Topkapi Saray, Istanbul, and is illustrated in J. Ayers and R. Krahl, Chinese Ceramics in the Topkapi Saray Museum, Istanbul, vol. II, Yuan and Ming Dynasty Porcelain, London, 1986, p. 512, no. 600. Another of slightly smaller size (37.8 cm.) is in The Metropolitan Museum of Art, New York, accession number 1978.149, and another of slightly larger size (43.2 cm.) from the Ardebil Shrine, now in the Iran Bastan Musuem, is illustrated by T. Misugi in Chinese Porcelain Collections in the Near East: Topkapi and Ardebil, Hong Kong, 1981, p. 119, no. A.35.