WASHINGTON, DC.- The National Gallery of Art has acquired The Stoning of Saint Stephen (c. 1602) by Aurelio Lomi (1556–1622), the leading painter in Pisa during the last quarter of the 16th century. It joins two other works by Lomi in the Gallery’s collection: a figure study in chalk, Studies of a Youth Pulling Ropes (recto); Faint Study of a Youth Pulling a Rope (verso) (1610s), and a small monochrome bozzetto of the Visitation, a preparatory work for a Florence altarpiece from around 1590.

The Stoning of Saint Stephen, a large study in oil on four joined sheets of paper, depicts the martyrdom of one of Genoa’s patron saints. The composition refers to a touchstone for the entire school: Giulio Romano’s altarpiece from c. 1521 in the church of Santo Stefano. The study is closely related to Lomi’s altarpiece for the church of Santa Maria della Pace (now in Genoa’s Musei Civici). Besides composition and subject, the two works share certain distinctive details, such as the luminous celestial sphere. However, the study is more expansive and densely populated than the altarpiece, suggesting it may have been an autonomous work.

Created while Lomi was living in Genoa (1597–c. 1604), this work is an exquisite example of the artist’s meticulously constructed compositions and figures, as well as his ability to create works suffused with light. It epitomizes the transition from the stylization of late mannerism to the more naturalistic light, movement, and texture of baroque style. 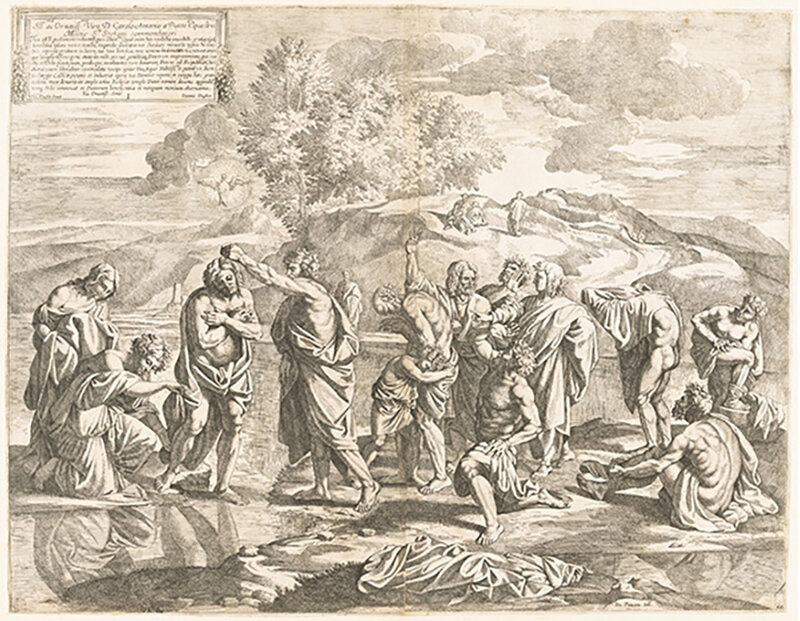 The National Gallery of Art also acquired Jean Dughet’s (1619–1679) The Seven Sacraments (c. 1650), a rare complete set of etchings after Nicolas Poussin’s (1594–1665) paintings of the seven sacraments. There are only three other known complete sets of these prints in the collections of the Bibliothèque nationale de France, the British Museum, and the Clark Art Institute in Williamstown, Massachusetts.

Poussin painted a first set of The Seven Sacraments in 1638–1642 and a second set in 1644–1648. He made the first set for Cassiano dal Pozzo, secretary to Cardinal Francesco Barberini and one of Poussin’s most important patrons. Cassiano took an active interest in the early history of Christianity and most likely suggested the almost unprecedented subject to Poussin. Dughet, Poussin’s secretary and brother-in-law, made these large-scale etchings after the first set of paintings, which were hung in Cassiano’s home. Baptism is the first plate in the series and features an elaborate dedication to Cassiano at upper left; the other prints are sequenced according to numbers etched at lower center. Dughet recorded the exact compositions in all of Poussin’s paintings except for Ordination, in which he incorporated the landscape background from Poussin’s second painting of this sacrament.

These are the first works by Dughet to enter the collection. They expand the Gallery’s holdings of 17th-century French art, which include Poussin’s painting The Baptism of Christ (1641/1642), from Cassiano’s first set of The Seven Sacraments.