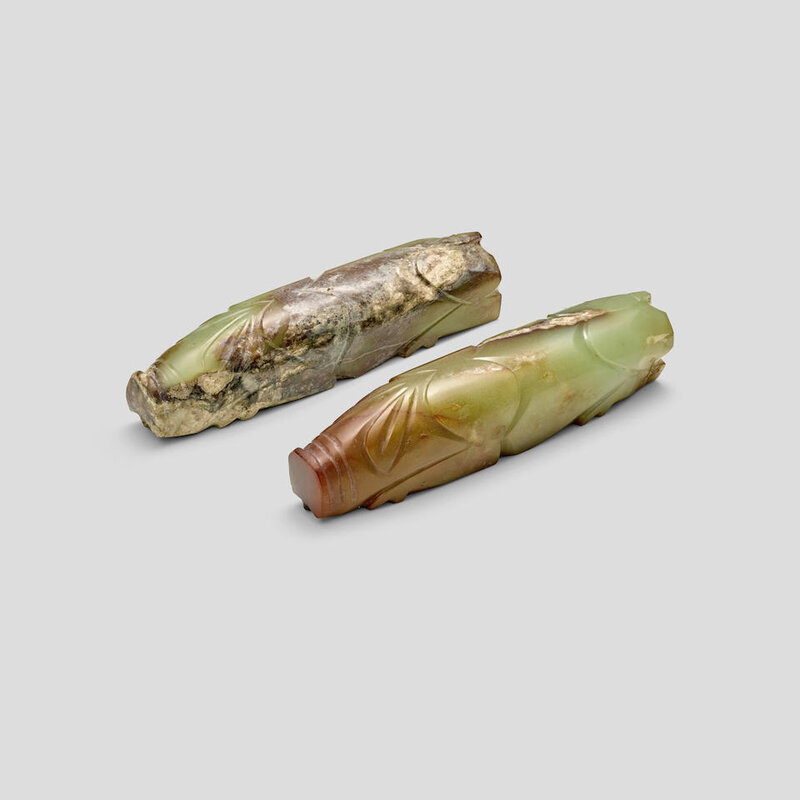 Each simply carved from a rectangular block of nephrite with features in a stylized form using strong slanting cuts to delineate the bodies, legs and heads, three simple lines engraved behind the snouts with a pierced tab to the underside, a further pierced tab to the tail, all with a high degree of polish.

Note: For a near identical pair of pigs in size and design, see J.J. Lally & Co., Arts of the Han Dynasty, New York, 1998, No. 10, where the author refers to similarly modelled pigs illustrated by Max Loehr and Louisa G. Fitzgerald Huber, Ancient Chinese Jades from the Grenville Winthrop Collection in the Fogg Art Museum, Harvard University, Massachusetts, 1975, p. 387, no. 555, where those authors cite a very similar example found in an early Eastern Han tomb at Beizhuang, Dingxian, Hebei which was assigned on epigraphic evidence to the period 56-88 CE and illustrated in Kaogu Xuebao, 1964, no. 2, p. 148, fig. 4.

Jessica Rawson illustrates another pair, similar in color to ours, Chinese Jade from the Neolithic to the Qing, British Museum, London, 1995, pp.319-320, no. 24:10 and notes that "carvings in the shape of recumbent pigs are found in many Han tombs. It has been assumed that they were weights, although they sometimes appear clasped in the hands of the dead."

James Watt, Chinese Jades from Han to Ch'ing, Asia Society, New York, cites a pig illustrated in Kaogu, 1974, no. 2, p. 121, as the earliest documented example of a pair of jade pigs found in the hands of a body in a burial tomb in Xuzhou, Jiangsu, which has been dated to the end of the third century BCE.