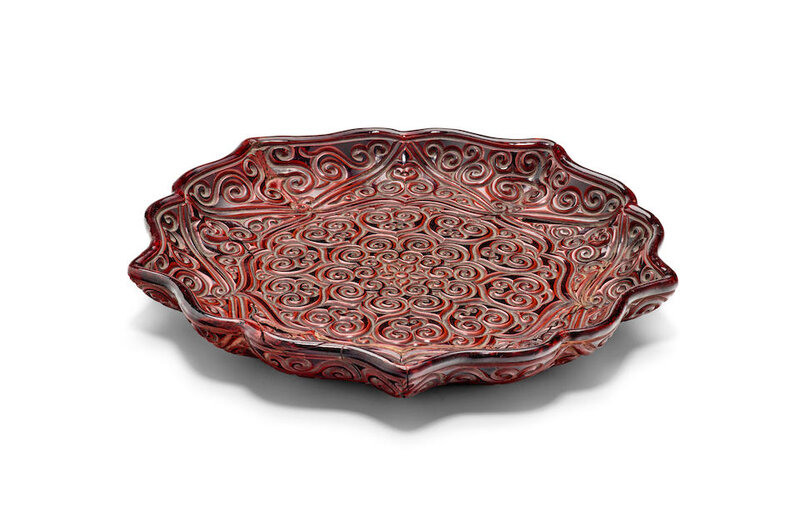 The interior carved in low relief through layers of differing tones of cinnabar ranging from deep-purple-red, orange and a pale green, with a radiating design of two pentafoil-cartouches of petal and star shape within the petal-form rim, centered by a five-petal flowerhead within two bands of spirals bordered by ruyi-heads within the first pentafoil cartouche itself set on a five-pointed star cartouche with a scroll ground and whose points merge at the rim bisecting further scrolls below the petal-form rim, the shallow rounded exterior sides carved to mirror the interior design, the base lacquered in a black (age cracks at stress points)..

Property from the Mee-Din and Robert W. Moore Collection of Chinese Lacquer.

Note: For a slightly larger circular dish with a comparable scroll and stylized ruyi design with central quatrefoil and circular cartouches set on an eight-pointed star cartouche dated to the Southern Song Dynasty, see The Colours and Forms of Song and Yuan China, Nezu Institute of Fine Arts, Tokyo, 2004, p. 138, col. pl. 50. Dishes of this type appear to prefigure our example.