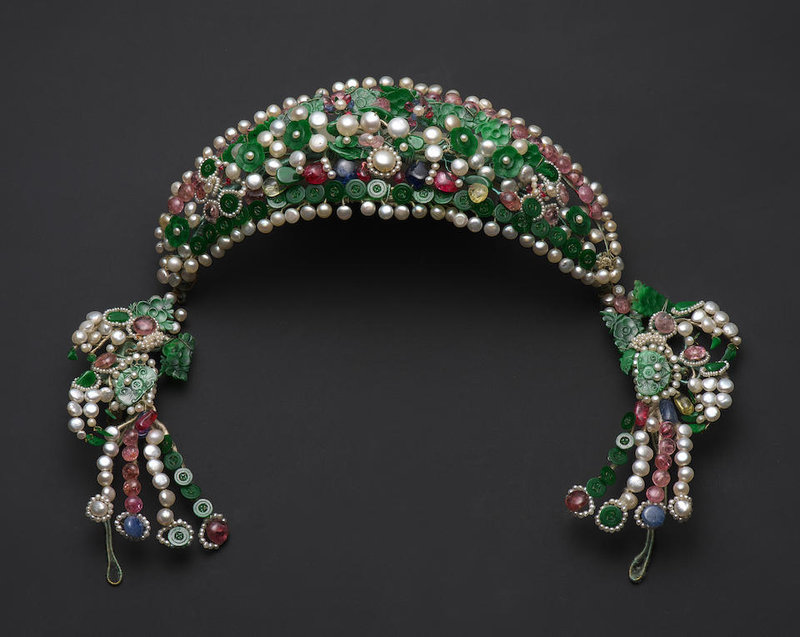 The pierced metal silk-woven arched frame elaborately decorated with delicate spring-mounted blossoming sprigs embellished with jadeite, pearl, tourmaline, sapphire and other semi-precious materials below a row of tourmaline beads and above a row of miniature jadeite coins, all within a beaded pearl border, each side of the headdress with a temple pendant applied with similar decorations, together with a seed-pearl necklace suspending jadeite and tourmaline pendants.

Note: The richly adorned headdress and temple pendants belong to a group of delicately crafted ornaments made for further decoration of the Imperial headdress known as dianzi. When worn, a dianzi can be further decorated by insertion of delicate ornaments inlaid with kingfisher feathers, jadeite carvings and other precious materials.

The arched form of the present lot is very similar to two gold headdress ornaments, one dated to the Jiaqing period and another to the Qianlong period, both in the Palace Museum, Beijing. They are known as tiaotou and are used as ornaments attached to the forehead of a dianzi headdress, see Jewellery and Accessories of The Royal Consorts of Ching Dynasty, Hong Kong, 1992, nos.198 and 199.

Jadeites of bright emerald green colour but cut into slices of decorative ornaments are known as guangpian, which literally means 'Guangdong slice', since such technique was likely originated in the Guangdong region. There are a number of headdress ornaments from the Imperial collections with decorated with guangpian jadeite carvings, see a related gold headdress ornament with kingfisher feather inset with pearls, semiprecious stones and jadeite, Qing dynasty, in the National Palace Museum, Taipei, illustrated in A garland of Treasures: Masterpieces of Precious Crafts in the Museum Collection, Taipei, 2014, pl.II-24; and another related jadeite headdress inlaid with pears, tourmaline and sapphire, in the National Palace Museum, Taipei (acc. no.Z.Y.000013). See also four similarly decorated gilt-silver hairpins in the Palace Museum, Beijing, all inlaid with guangpian-style jadeites and other precious stones, Qing dynasty, illustrated in Jewellery and Accessories of The Royal Consorts of Ching Dynasty, Hong Kong, 1992, nos.131-134.