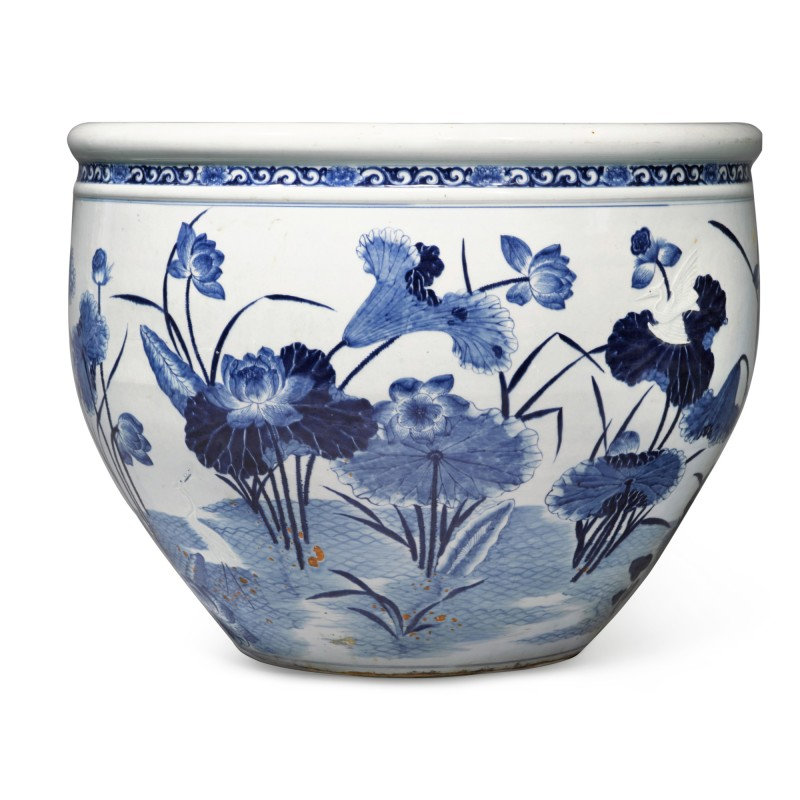 with deep rounded sides rising from a narrow base to a galleried lipped rim, finely painted in various shades of cobalt blue with a continuous frieze of large lotus blooms, frilly pads and water reeds emerging from a rippling pond, three graceful herons painted in white slip, one standing in the water and two in flight, all below a floral scroll band encircling the rim.

Note: This jardinière is exceptional for its remarkably large size as well as its combination of subtle and bold decoration on the exterior. Finely painted in white slip against the white background, the herons introduce an unexpected visual element when viewed up close, attesting to the artistic skills of craftsmen during the 18th century. Jardinières of this size might have been used in a large hall or garden of a wealthy family at the time.

Compare a slightly smaller jardinière painted with ducks swimming in a lotus pond and a stylized flower band on the interior of the flaring rim, sold at Christie’s London, 11th November 2011, lot 1438. Motifs similar to the present piece can also be found on jardinières of a smaller scale, see an example depicting insects amongst lotus growing from a pond, sold in our Hong Kong rooms, 26th November 1981, lot 822. Compare also a related vessel with a slightly smaller and less rounded body, illustrating birds amidst flowering branches and rockwork, sold in our London rooms, 16th May 2007, lot 82.