The vase is cast with a spreading foot that rises to a cushion-form mid-section and a trumpet neck, with four gilt vertical flanges on each section. The sides are decorated with peony blossoms on the foot, lotus scrolls on the mid-section, and upright overlapping plantain leaves with floral sprays on the neck. The interior of the mouth is further decorated with peony scrolls above a band of upright gilt plantain leaves. The later gilt-bronze plaque base is incised with an apocryphal four-character Jingtai mark within a double square.

Note: This superb vase is one of a select few known cloisonné enamel zun-form vases dating to the Xuande period (1426-1435), which are all of approximately the same size and decorated with similar lotus-scroll decoration. A vase from this rare group is in the Palace Museum, Beijing, and illustrated in Zhongguo meishu quanji, vol. 10, Beijing, 1987, p. 92 and p. 162 no. 299, where it is dated to the Xuande period and is attributed the Ming imperial workshop Yuyongjian, a sub-division of the Neifu (The Inner Treasury), responsible for providing furnishings to the Imperial Household. The base of the Beijing Palace vase is incised with a double vajra and a later-added six-character Jingtai mark. Another vase from this group, also with a double vajra and later-added Jingtai mark on the base, is in the Asian Art Museum of San Francisco, The Avery Brundage Collection, and is illustrated by B. Quette (ed.) in Cloisonné: Chinese Enamels from the Yuan, Ming and Qing Dynasties, New York, 2011, p. 236, no. 24. (Fig. 1) A further vase from this group, from the collection of P. M. Moreau, Paris, acquired in Paris before 1924, was included in the exhibition, Chinese sculpture and work of art, Eskenazi, New York, 17-29 March 2008, no. 18. Two additional examples include the vase sold at Christie’s New York, 2 December 1989, lot 58, and the vase sold at Christie’s London, 11 May 2010, lot 119. 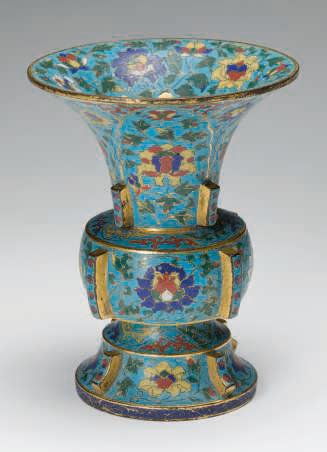 The current vase, like the others in the group, displays the characteristics that distinguish Xuande cloisonné enamels as amongst the finest cloisonné enamel wares ever produced. They have heavy bronze bodies, assume powerful forms and feature strong colors set within fine, accurately bent wires that delineate the contours of the emphatic designs. The gilding of the wires is of slightly irregular thickness, which imbues the decoration with a natural freshness and purity. The decorative scheme on the present vase is particularly rich, with four different types of flowers rendered in bold color combinations. This is further echoed by the gilt petal-shaped panels enclosing the floral sprigs around the exterior of the trumpet-shaped neck

The shape of these archaistic zun-shaped vases find their inspiration in the ancient ritual bronzes of the Shang (circa 1600-1046 BC) and Western Zhou (circa 1046-771 BC) periods, such as the late Shang dynasty, 12th-11th century BC, bronze ritual wine vessel, zun, sold at Christie’s New York, 15 September 2011, lot 1106. (Fig. 2) The form found considerable favor with the court during the Yuan and early Ming period, 14th-15th century, providing inspiration not only for cloisonné enamel artisans but also ceramicists, as evidenced by the ‘Numbered Jun’ zun-form vase dating to the Yuan-early Ming dynasty, 14th-15th century, from the Linyushanren Collection, sold at Christie’s Hong Kong, 2 December 2015, lot 2811 (Fig. 3), and the blue-and-white zun-form vase decorated with dragons formerly in the collection of David Berg, Esq, and now in the Harvard Art Museums, where it is currently dated Ming dynasty, perhaps Chenghua period (1465-1487) (Fig. 4).