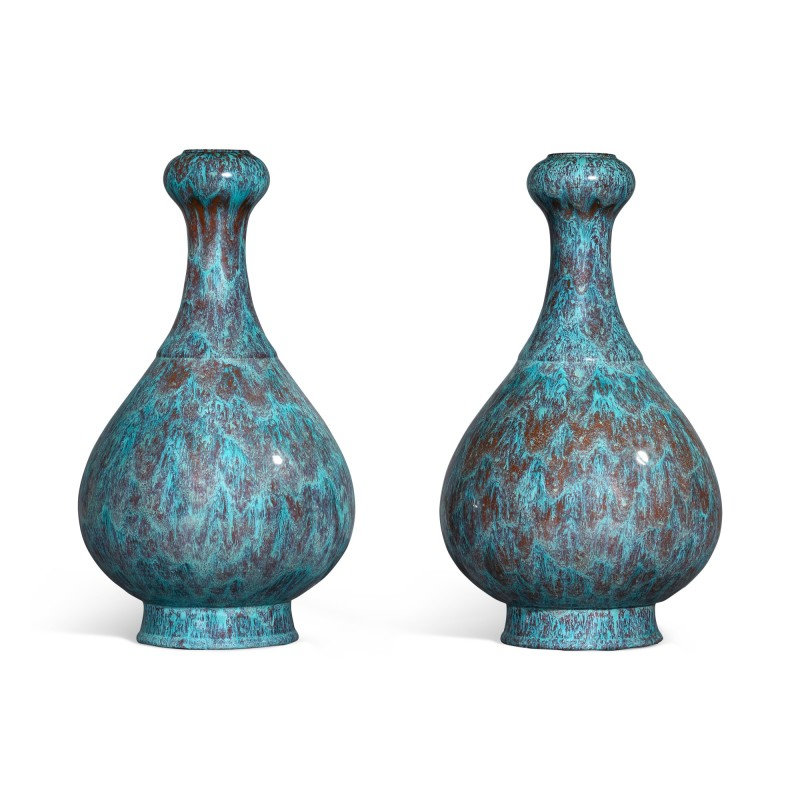 each elegantly potted with a pear-shaped body supported on a spreading foot rising to a waisted neck surmounted by a garlic-head mouth, covered overall in a brilliant turquoise glaze vibrantly heightened with deep violet-red cascades, the recessed base with an impressed four-character seal mark, wood stands.

Note: The present pair of vases are exceptionally impressive with their highly unusual, well-matching glaze effect and their elegantly curved silhouette. While the typical ‘robin’s egg’ glaze shows a more even speckled blue, the glaze on the present pieces displays a more variegated, lively pattern of colours. Such extraordinary effect is perhaps the result of the reckless experimentation with Jun-type glazes undertaken during the Yongzheng period. Developed at Jingdezhen under the pioneering direction of the official Tang Ying (1682-1756), who is known to have studied in detail the finest imperial porcelains of the Song dynasty, the ‘robin’s egg’ glaze was created as a reinterpretation of the famous Jun glazes of the Song. Known as lujun (‘furnace Jun’) in Chinese, the glaze was fired at a lower temperature than that of the porcelain itself and thus required a second firing. In Taocheng jishi [Records of ceramic production], one of the most important documents about the Imperial Factory written by Tang Ying during the last year of the Yongzheng reign, lujun glaze is listed first among the nineteen major types of ceramics that he succeeded in firing and proposed as suitable for regular delivery to the imperial court. Although the production of ‘robin’s egg’ glaze lasted till the end of the Qing dynasty, the finest pieces were created in the Yongzheng and Qianlong periods. According to the archival records of the imperial household, vases with this glaze were often displayed in the rooms on matching zitan wood stands as are preserved with the present pair. Simple yet elegant in design, these two vases not only reflect the Yongzheng Emperor's very fine taste but also possess a timeless appeal.Two ‘robin's egg’ glazed vases of a closely related garlic-mouth form are known, one in the National Palace Museum, Taipei (accession no. Zhong-Ci-749) , published in the Illustrated Catalogue of Ch’ing Dynasty Porcelain in the National Palace Museum, Republic of China, K’ang-hsi Ware and Yung-cheng Ware, Tokyo, 1980, pl. 146 (fig. 1); the other in the Zande Lou Collection, included in the exhibition Qing Imperial Monochromes: The Zande Lou Collection, Art Museum, The Chinese University of Hong Kong, Hong Kong, 2005, cat. no. 20. Vases of this shape are also known with different variations of the ‘robin’s egg’ glaze. Two slightly larger vases are in the Palace Museum, Beijing (accession nos Gu-148964 and Gu-148963); one imitating lazurite with richer tints of blue, included in the exhibition China. The Three Emperors 1662-1795, Royal Academy of Arts, London, 2005-6, cat. no. 179, and illustrated in Gugong Bowuyuan cang: Qingdai yuyao ciqi / Qing Porcelains from the Imperial Kilns Preserved in the Palace Museum, vol. 1, part 2, Beijing, 2005, pl. 126; the other with blue mottles concentrated mostly on the upper part of the vessel, illustrated in The Complete Works of Chinese Ceramics, vol. 14: Qing Dynasty (part 1), Shanghai, 1999, pl. 205. A further vase with additional shades of red particularly around its mouth, is preserved in the National Palace Museum, Taipei (accession no. Zhong-Ci-743).

Compare also two vases of slightly different form with the more typical ‘robin’s egg’ glaze. Usually called lianpengkou ping (‘lotus neck’ vases), these vessels are decorated with a mouth modelled in the form of a lotus flower rising from a slightly taller neck, and flanked with applied lion masks on the shoulders. One of them is in the Palace Museum, Beijing (accession no. Gu-148947), illustrated in Kangxi, Yongzheng, Qianlong: Qing Porcelain from the Palace Museum Collection, Hong Kong, 1989, pl. 120; and the other is preserved in the Victoria and Albert Museum, London (accession no. 601&A-1907), illustrated in Rose Kerr, Chinese Ceramics: Porcelain of the Qing Dynasty 1644-1911, London, 1998, pp. 88-9, fig. 64.