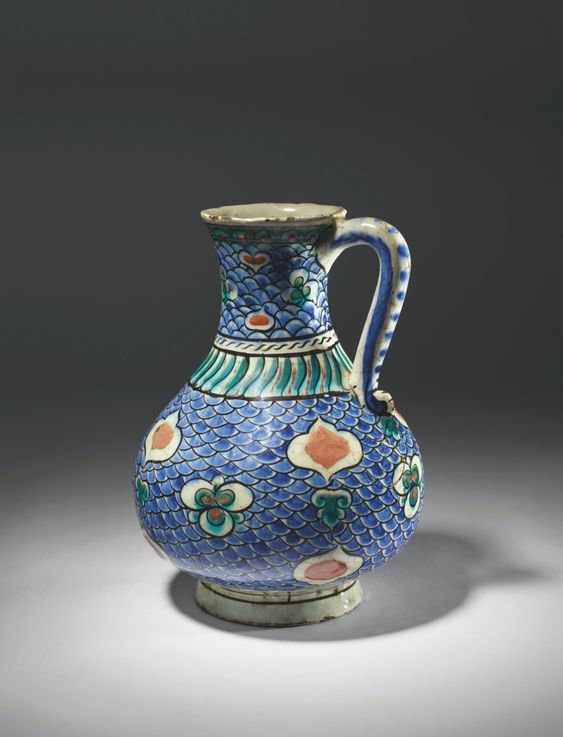 Provenance: Purchased by present owner in 1980.

Note: The use of elegant fish-scale pattern which covers the ground of this jug is first found decorating a vessel in the form of a fish in the Benaki Museum in Athens which dates to the 1520s (inv.no.10; Nurhan Atasoy and Julian Raby, Iznik, the Pottery of Ottoman Turkey, London, 1989, p.106, no.451, pl.124). The scale pattern was probably inspired by early 16th century Deruta majolica although its use can be seen in Islamic art on a 15th century twin dragon headed candlestick from Khorasan in the David Collection (Kjeld von Folsach, Islamic Art, Copenhagen, 1990, p.207, no.346). In the late 1570s and 80s it became popular to enliven the background of vessels with fish-scale motif, as seen here. On our jug, the fish-scale is used with another popular motif, cintamani roundels. In Ottoman Turkey that motif appears mainly on textiles but occasionally on Iznik pottery and represents power, force and courage. Cintamani roundels were sometimes seen grouped with pairs of wavy lines as can be seen in a similar jug formerly in the Lagonikos Collection, Alexandria (J. Carswell, Iznik Pottery, London, p.83, fig.62). The three circles however appear more often on their own as on this fine example. The combination of fish-scale and cintamani is found on a jug in the Gulbenkian Collection (inv.no.795; Maria Querios Ribeeiro, Iznik Pottery, Lisbon, 1996, p.215, no.70). The white ground decorated in cobalt-blue, bole-red and turquoise with four blue tulip sprays divided by foliate motifs, the cusped rim with stylised 'wave and rock' design, the exterior with alternating rosettes and paired tulips, old collection label to rim, a drill hole to the rim and foot, small crack to the rim.

Note: In the 1560s, Iznik painters experimented with arrangements and compositions of typical floral motifs and colour variations with a view to enriching the decorative scheme of their pottery, particularly playing with symmetrical compositions of floral sprays (Nurhan Atasoy and Julian Raby, Iznik, The Pottery of Ottoman Turkey, London, 1989, p.234).

The symmetrical arrangement of four floral sprays found is a less common composition only found on a small group of Iznik dishes. An Iznik dish decorated with a quatrefoil motif composed of tulips alternated with cobalt-blue roundels is in the Ömer Koç Collection (Hülya Bilgi, The Ömer Koç Iznik Collection, Istanbul, 2015, pp.320-1, no.132) and another was sold in these Rooms, 1 April 2021, lot 80, although both of these example employ red tulips rather than the striking cobalt-blue found here.

Moreover, the flowers decorating this dish are drawn on a much smaller scale and with greater control than the dishes of comparable design mentioned above. This dish rather shares its unusually fine drawing with a jug sold in these Rooms, 21 April 2016, lot 161 and another formerly in the Barlow Collection which sold at Bonham’s, 29 April 2004, lot 193 (also published in Nurhan Atasoy and Julian Raby, Iznik, The Pottery of Ottoman Turkey, London, 1989, no.430). For an Iznik tile with similarly fine drawing, see lot 91 in the present sale. Cf. my post: Christie's announces Art of the Islamic and Indian Worlds Including Oriental Rugs and Carpets sale The turquoise ground decorated with white and bole-red scrolled arabesques, separated from floral sprays and cloud motifs on a cobalt-blue ground by a red border, corner truncated with a bevelled decorated finish, a restored crack, otherwise intact

Note: This impressive tile comes from a panel housed in the Victoria and Albert Museum, London (inv.no. 431-C.1900, Arthur Lane, A Guide to the Collection of Tiles, London, 1960, pl.14a). A band of six border tiles from this panel are also found in the David Collection, Copenhagen (Kjeld von Folsach, Art from the World of Islam in the David Collection, Copenhagen, 2001, no.270, p.190 Further examples of the border are in the Sadberk Hanim Museum, Istanbul, illustrated on the cover of Ara Altun, John Carswell, and Gönül Öney, Turkish Tiles and Ceramics, Istanbul, 1991, no.i.62. A further spandrel tile from the Heidi Vollmoeller Collection, which was not intact, was sold in this Rooms, 27 April 2004, lot 336 and is now in the Museum of Islamic Art, Doha. The white ground decorated in cobalt-blue, turquoise, bole-red and black with a central cypress tree flanked by floral sprays of carnations and tulips, the cusped rim with 'wave and rock' design, the exterior with alternating rosettes and trefoil motifs, intact.

Note: The strong tall cypress tree which divides the design of our dish into two almost symmetrical halves is a feature which Julian Raby associates with the development of the bole-red glaze in the 1560s, (Nurhan Atasoy and Julian Raby, Iznik, The Pottery of Ottoman Turkey, London, 1989, p.235). This is a particularly early example of this composition which gained popularity in the second half of the 16th century. The use of the cypress tree as a vertical axis emphasises the symmetry of the surrounding floral arrangement and further examples of the elegant design can be found in (Atasoy and Raby, op.cit., p.235, nos.427-434). An example in the David Collection, (inv.no. 4/1962, Atasoy and Raby, op.cit., no. 681) similarly displays a cloudband partially obscured by the tree. 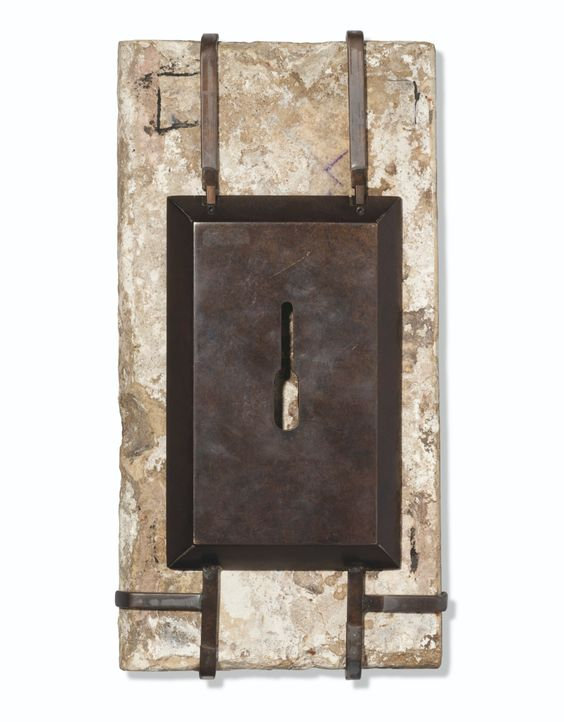 Note: This charming tile is one of only two known tiles of this design, the other housed in the Musée du Louvre, Paris (inv.no.7033, see Sophie Makariou and Charlotte Maury (eds.), Three empires of Islam: Istanbul, Isfahan, Delhi : Master pieces of the Louvre collection, Valencia, 2008, p.302, no.108-B). The design, reserved against a 'whipped' blue ground is particularly well-controlled and the organisation of the floral sprays and the drawing of the blue tulips is related to a dish in the present sale, see lot 69. The masterful control of the glaze, in particular the red slip, was incredibly difficult to achieve and displays the remarkable skill of our artist. The high quality of the drawing on this tile is further emphasised by the restrained arrangement of flowers purposefully placed to fill the polylobed medallions. 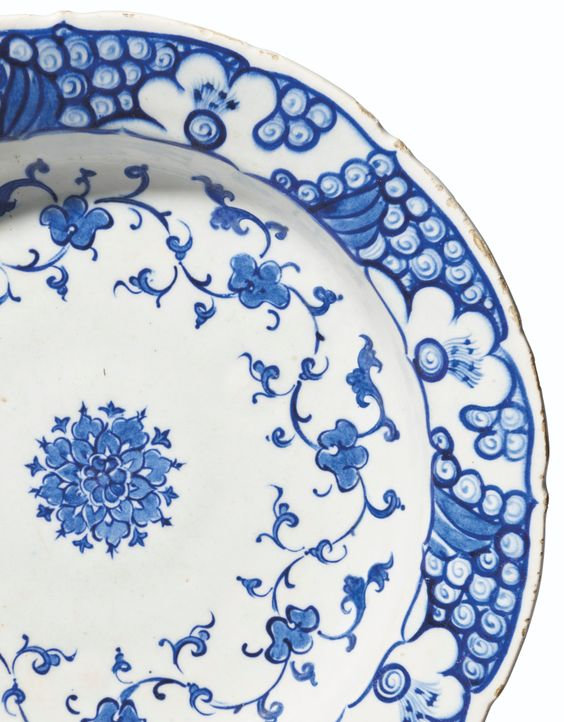 The white ground decorated in cobalt-blue with a central rosette surrounded by a band of scrolling flowers and vines, the cusped rim with 'wave and rock' design, the exterior with alternating rosette and trefoil motifs, a repaired break.

Provenance: Paris Trade, 1980.
English Private Collection, from whom acquired by the present owner.

Note: This dish relates very closely to a blue and white group of wares labelled by Atasoy and Raby as the “Wheatsheaf style” and dated to between 1570 and 1575 (Nurhan Atasoy and Julian Raby, Iznik: The Pottery of Ottoman Turkey, London, 1989, p.239). Although lacking the ears of wheat after which the group is named, our dish displays the characteristic meandering floral stems with cloud-like patterns encircling a central rosette found on other published dishes and reflecting a noted Chinese influence (op. cit., cat.441 and cat.443, p.241). Also taking inspiration from Chinese wares is the stylised breaking wave motif adorning the rim which became a standard feature of Iznik dishes. Originating from the Yuan dynasty, the motif became increasingly removed from its Chinese model through Turkish potters allowing for us to accurately date the motifs of our dish to a very similar 'wheatsheaf style' dish from 1575 in the David Collection (Kjeld von Folsach, Islamic Art, The David Collection, 1990, cat.181, p.124). The treatment of the underside of the dish, with the repeated rosettes and near-fleur-de-lys motifs is very similar to that of a dish in the Ömer Koç collection (Hülya Bilgi, Iznik: The Ömer Koç Collection, Istanbul, 2015, p.385, cat.165.). The white ground decorated in cobalt-blue, bole-red and green with a central roundel of rumi motifs on cobalt-blue, the cavetto with cloud and flame motifs, the rim with sylised 'wave and rock' design, the exterior plain, a small drill hole to the foot. The white ground decorated in bole-red, cobalt-blue, green and black, with a blue fish-scale medallion on a green fish-scale ground, the rim decorated with a zig-zag pattern, the exterior with alternating blue and green medallions, drill hole to the foot, small chip to rim. 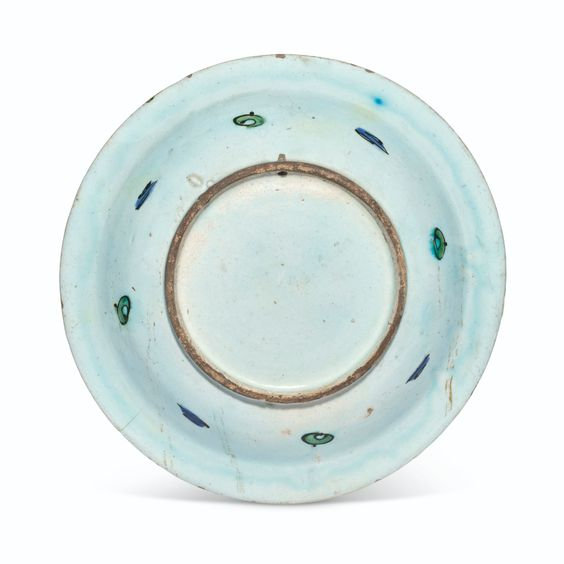 The white ground decorated in cobalt-blue, bole-red, green and black with a sprig of hyacinths rising from a tuft of grass surrounded by carnations and tulips, the rim with clouds, the reverse with alternating cobalt-blue and green pendant motifs, a drill hole in the foot, intact. Note: The decoration of our dish and in particular the rim, with its alternating tulips and rosettes, makes it part of a group which has been dated to 1565-90 (Hülya Bilgi, Iznik: The Ömer Koc Collection, Istanbul, 2015, p.195). A closely related dish in the Ömer Koc collection dated 1585-90 shared similar rim decoration which, like our dish, is repeated on the underside (op. cit., cat.114, p.290). What makes our dish unusual is the use of blue-grey paint to decorate flowers. Atasoy and Raby point to its rare usage, highlighting a group employing solely grey decoration against a white ground which they date to 1540-75 (Nurhan Atasoy and Julian Raby, Iznik, The Pottery of Ottoman Turkey, London, 1989 p.59). A dish with a similar decorative scheme employing similarly blue-grey coloured flowers was sold in these Rooms on 06 October 2009, lot 170.

Christie's. Art of the Islamic and Indian Worlds Including Oriental Rugs and Carpets, London, 28 October 2021