Image of the display cabinet. © The Trustees of theBritish Museum

LONDON - The British Museum has installed a free display Ukraine: Culture in crisis. Inside the Museum’s Collecting the world gallery, this temporary display celebrates Ukrainian culture from deep history to the present, using objects drawn from the Museum’s collection and curated by the Museum’s experts. The objects on display provide a talking point for visitors concerned about the current conflict in Ukraine.

Hartwig Fischer, Director of the British Museum, said ‘Culture is precious yet fragile: whether tangible or intangible, it fosters understanding and belonging. The scale of human displacement and destruction in Ukraine is deeply distressing, as are the threats to its rich culture. We extend our deepest sympathy to the people of Ukraine and stand ready to provide support to our colleagues in museums and at historic sites across Ukraine’.

The cultural heritage of Ukraine, the largest country in Europe, dates back nearly one million years, when early human hunter-forager groups populated areas along the Black Sea coast and gradually spread inland. About 8,000 years ago, early farming communities began to exploit the fertile black soils and established prosperous, large settlements between Kyiv and Odessa. Agriculture and trade continued to thrive long after these sites had declined. By the 400s BC, cosmopolitan towns grew up on the Black Sea coast, influenced by Greek colonists and Scythian tribes originating in southern Siberia.

From the AD 800s to early 1000s, Kyiv became the capital of the kingdom of Rus’ and Christianity was adopted as the main religion. The city was sacked in 1240 by the Mongols, and the centre of Rus’ shifted north to Moscow. Western Ukraine was successively occupied by Poland, Lithuania, Austria and Russia. Ukraine became part of the Soviet Union in 1922, suffered heavily from induced famine in 1932–3 and again during the Holocaust. It gained full independence in 1991. Early farming communities settled in Ukraine about 8,000 years ago. They cultivated the fertile soils still renowned as the breadbasket of Europe where, by about 6,200 years ago, they occupied the largest known city-like settlements in Eurasia. Given by Denis A. J. Buxton through the Art Fund 1928,0605.1. Ukrainian costume is a source of local pride and regional identity. Fabric was made from flax and embroidered with naturally dyed threads. This married woman is in festive attire and wears a vyshyvanka (embroidered shirt). Bequeathed by R. W. Lloyd 1958,0712.3065.5 Ukrainian costume has a long history. The lambskin hat and postoli (moccasin-like shoes) depicted here date back to ancient Rus’. The sharovary (trousers) were adopted from the Caucasus, a region between the Black Sea and the Caspian Sea. Bequeathed by R. W. Lloyd 1958,0712.3065.6. Decorated Easter eggs express the renewal and fragility of life. Known in Ukraine as pysanky (written) the designs are drawn in wax, the egg dyed, and the wax then melted off. Here, the dove holds an olive branch, a symbol of peace. Given by John Newall from the collection of anthropologist Venetia Newall, 2018,8050.221.

Greek colonies were established around the Black Sea between 600 and 300 BC, many founded by settlers from Miletos, a Greek state in present-day western Turkey. The best-known of these is Olbia which traded cereals, dried fish and slaves to Miletos and other Greek settlements in return for wine, olive oil and various goods. These three objects, found at Olbia, illustrate the affluence of this large ancient fortified town. Black glazed, fluted amphora, made in southern Italy, about 300–250 BC. © The Trustees of theBritish Museum.

Part of a collection purchased in 1907 from Erato Mavrogordato, a Greek artist and puppet-maker living in Odessa. 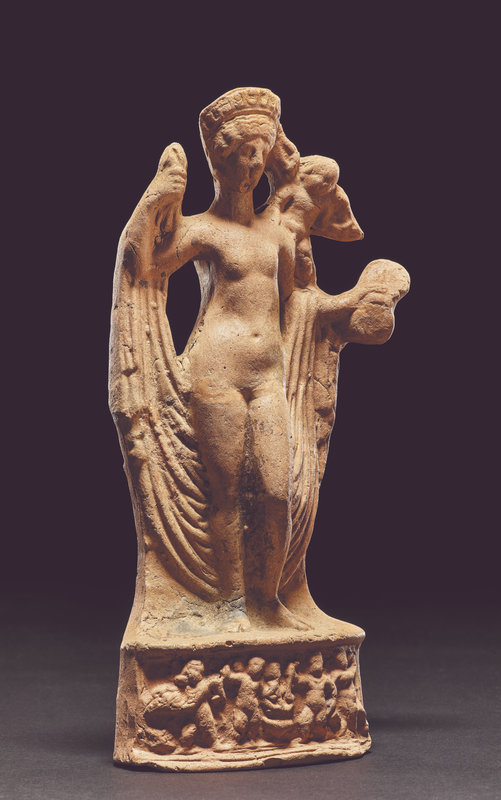 Mould-made statuette of Aphrodite and Eros, made in Turkey, about AD 50–150. © TheTrustees of the British Museum.

Part of a collection purchased in 1907 from Erato Mavrogordato, a Greek artist and puppet-maker living in Odessa Painted incense-burner in the shape of a cylindrical tomb decorated with miniature columns,about 300 BC. © The Trustees of the British Museum