GREENCASTLE, IN.- Andy Warhol: Faces and Names, an exhibition featuring over 150 Polaroid and black-and-white photographs by Andy Warhol, will open at the William Weston Clarke Emison Museum of Art at DePauw University on September 3, 2008 and will run through December 14, 2008.

From 1970 to 1987 Andy Warhol took scores of Polaroid and black-and-white photographs, the vast majority of which were never seen by the public. These images often served as the basis for his commissioned portraits, silk-screen paintings, drawings, and prints. In 2007, to commemorate its twentieth anniversary, the Warhol Foundation launched the Andy Warhol Photographic Legacy Program. Designed to give a broad public greater access to Warhol’s photographs, the program donated over 28,500 of Warhol’s original Polaroids and gelatin silver prints to more than 180 college and university museums and galleries across the country – including DePauw University. The gift of such an extraordinary number of photographs not only brings Warhol’s astoundingly prolific photographic production to light, it also enables new insights into his work process and his use of the photographic medium.

The photographs included in Andy Warhol: Faces and Names – over 100 Polaroids and 50 black-and-white prints gifted to DePauw by the Warhol Foundation – reflect both the sheer quantity and the remarkable range of figures and subject matter that Warhol captured with his camera.

While the Polaroid portraits reveal Warhol’s profound and frank engagement with the personality in front of his lens, the gelatin silver prints point to his extraordinary compositional skill, his eye for detail, and his compulsive desire to document the world around him. Taken together, these photographs survey the scope of Warhol’s aesthetic interests and demonstrate the reach of his curious, far-roaming eye.

Warhol’s Polaroids have been widely presented in exhibitions and publications as singular images depicting a glittering array of celebrities – the models, actors, artists, business tycoons, sports heroes, and socialites that populated his world. However, celebrities were not the only figures Warhol photographed with his Polaroid Big Shot, the distinct plastic camera he used for the majority of his sittings. Over half of those who sat for him were little-known or remain unidentified. And the number of images he took at each session varied as greatly as the figures he shot: of some sitters he made only a dozen Polaroids; of others he made hundreds.

A wealth of information about Warhol’s process and his interactions with his sitters is revealed in his Polaroid photographs. Strikingly evident is the intense, though perhaps brief, emotional engagement he had with these individuals. While some figures display relative ease in front of the camera, others present a stiff and studied countenance that appears unaffected by Warhol’s instructions to turn this way or that, to look over a shoulder, or to pose with the hands. Warhol positioned his sitters in a variety of similar, classical poses, over and over again, striving to obtain the perfect composition that matched their personalities, revealed their best features, and preserved them at their finest.

Repetition, a recurring motif in Warhol’s paintings, plays both a conceptual and practical role in his photography. By making several Polaroids, he had more material from which to work. By shooting at length, more about the sitter was exposed. Only after seeing many photographs from the same sitting can one discern that the consistency in poses for a star is the result of a celebrity’s attempt to control his or her own “image,” while the consistency in the poses of other figures is more likely due to their concentration on Warhol’s instructions or to their unease at being in such close proximity to Warhol himself. Seen all together, the Polaroids also destabilize the iconic status that a Warhol image assumes when displayed singly. On its own, a Polaroid image is fully identified with the artwork that ultimately grew out of it; the face depicted becomes a kind of signifier for larger cultural concepts of beauty, power, and worth. In a series however, the sitter’s individuality remains intact, resistant to the idealizations that result once the image is transferred from photograph to silkscreen to painted portrait.

In contrast to the formal posing and tight compositions that are the hallmarks of his Polaroid photography, Warhol’s black-and-white prints are a study in casual spontaneity. Shot with a Minolta SLR, the automatic 35 mm camera that enabled him to take a picture without concern for focus or light levels, the images serve as the visual diary of Warhol’s life. Anyone and everyone was subjected to his lens, most delightfully when they were looking their most unglamorous. “A good picture,” Warhol once wrote, “ is one that’s in focus and of a famous person doing something unfamous.” As drawn to the pedestrian and commonplace as he was to the spectacular and glamorous, Warhol considered the settings and stages for his subjects just as important as the subjects themselves.

By presenting both kinds of images side by side, this exhibition allows viewers to move back and forth between moments of Warhol’s “art,” “work,” and “life” — inseparable parts of a fascinating whole. 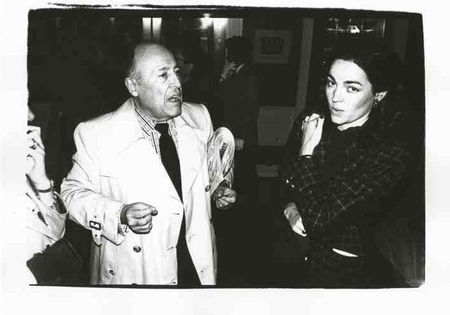