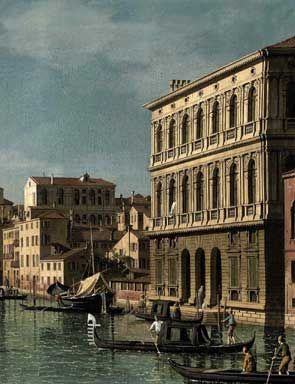 LONDON.- Christie’s announce that they will offer two masterpiece views of Venice by Canaletto at the auction of Important Old Master and British Pictures on 2 December 2008 in London. Believed to have been commissioned in 1738 through the artist’s agent Consul Smith, whose own collection of the artist’s works was sold to King George III, the paintings have since passed by family descent and are offered for sale for the first time. The pictures will be on public exhibition at Christie’s London from 29 November to 2 December, and are expected to realise a combined total in excess of £7 million.

Richard Knight, International Director of Christie’s Old Master Department and Paul Raison, Director and Head of Old Master Pictures at Christie's, London: “These two quintessential views by Canaletto were painted while the artist was at the peak of his artistic powers and are extraordinary pictures, not only for their exceptional quality and condition, but also for their provenance which has seen them passed down the same family since they were presumably commissioned in the 1730s. International collectors continue to show the greatest demand for rare works which offer impressive quality, condition and provenance, all of which are held in abundance by these magnificent pictures.”

The two paintings to be offered at Christie’s were commissioned as part of a series of four works by Thomas Brand (circa 1717-1770) of The Hoo in Herefordshire; the two other works from the series were sold privately in 1953; and one of these sold at Christie’s in London in December 2000 for £7.7 million. Thomas Brand was schooled at Eton, where he was a friend of Horace Walpole, before proceeding to Queen’s College, Cambridge. He made the Grand Tour in 1738-39 and visited Turin, Bologna and Florence en route to Rome, where he had arrived by 11 March 1738. He was in Padua by October, and is thought to have visited Venice at around this time. It was while in Venice in 1738 that he is believed to have commissioned the series of four works through Consul Smith, two of which will be offered by his descendents at Christie’s in December. Thomas Brand married the daughter of the Duke of Kingston, and it is through this marriage that he became better acquainted with the Duke of Bedford, another great collector of Canaletto.

The two paintings each measure 18½ x 30¾ in. (47 x 78.2 cm) and depict Venice from different viewpoints in the city. The Piazzetta di San Marco, Venice, looking west, with the Liberia is taken from the east side of the Piazzaetta from under the west loggia of the Doges Palace. The pictures featured in an exhibition of European pictures from English country houses in London in 1957 and at the exhibition In Celebration: the Art of the Country House at Tate Britain in 1998-99. The View of the Libreria is the primary treatment of the composition and represents the first time that the artist painted the subject (estimate: £4,000,000 to £6,000,000). The Grand Canal, Venice, looking north-west from the Ca’ Corner to the Ca’ Contarini degli Scrigni, with the campanile of Santa Maria della Carità (estimate: £3,000,000 to £5,000,000) illustrated above shows the Grand Canal looking north west. This work was engraved for Antonio Visentini’s Prospectus Magni Canalis Ventianum, a collection of engravings and etchings of Canaletto’s paintings that was commissioned by Consul Smith, and which included a large number of his own works which were to be later sold to George III and enter The Royal Collection.

Canaletto is one of the most celebrated artists of the 18th century, and his topographical views of Venice are recognized around the world. Born in Venice in 1697, Canaletto began his artistic career as an apprentice to his father, a theatrical scene painter. During a visit to Rome in 1719-20, Canaletto was inspired by the topographical works of Giovanni Panini and on his return to Venice he dedicated himself to painting views of the great city. Canaletto was a supremely talented artist who would most often convey the landscape of Venice with great accuracy, capturing a snapshot view of the city and delicately depicting lively characters at the forefront of his pictures. His rise to prominence was supported by rich Europeans who traveled to Venice on the Grand Tour, and who returned with works of Canaletto, spreading news of the artist’s talents around the continent.

From the early 1720s, Canaletto was supported by Joseph Smith, a British merchant and collector who lived in Venice and who became British Counsel to the Republic in 1744. Consul Smith was both a patron and an agent to Canaletto, and he was responsible for many of the artist’s works being acquired by noble British collectors. In 1762, Smith sold his collection to King George III, as a result of which The Royal Collection boasts an unrivalled group of paintings and drawings by Canaletto.