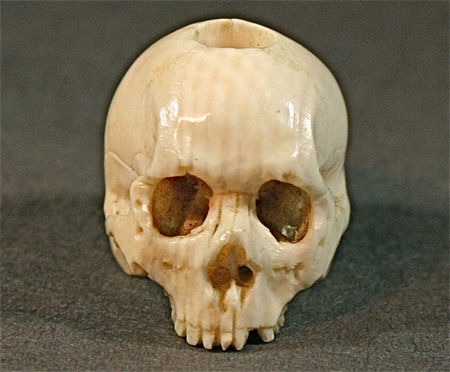 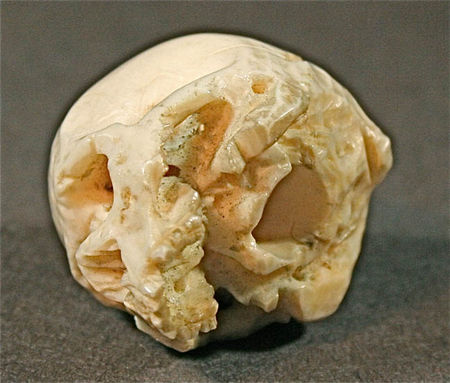 Vary Small antique elephant ivory Japanese Netsuke skull This Netsuke is a skull head, it is a carved master piece of work. The piece is hand carved ivory and is very detailed. On the skull head you can see each individual tooth and all of the bone structure.The carving is exceptional and it's showing all of it's old age. Netsuke, is a sliding bead on a cord. Whatever the form of the container, the fastener that secured the cord at the top of the sash was a carved, button-like toggle called a netsuke. Prices at auctions in the USA for collectible netsuke typically range from a few hundred dollars to a few thousand. Netsuke, They are compact three-dimensional figures carved in a round shape, and are usually around one to three inches high. Height 5/8 of a inch; Width 6/8 of a inch; Depth 1/2 of a inch; Weight 0 oz. Price $1,400

Netsuke (Japanese:æ ¹ä»˜) are miniature sculptures that were invented in 17th century Japan to serve a practical function Traditional Japanese garmentâ€”robes called kosode and kimonoâ€”had no pockets, however men who wore them needed a place to store their personal belongings such as pipes, tobacco, money, seals, or medicines. Netsuke, like the inro and ojime, evolved over time from being strictly utilitarian into objects of great artistic merit and an expression of extraordinary craftsmanship. Such objects have a long history reflecting the important aspects of Japanese folklore and life. Netsuke production was most popular during the Edo period in Japan, around 1615-1868. Today, the art lives on and some modern works can command high prices. Like many other art forms, netsuke reflect the nature of the society that produced them. This is particularly true of Netsuke. The reasons why this is so include long periods of isolation imposed both by geography and internal politics and limited avenues of self-expression for Japanese citizens. As a result, netsuke display every aspect of Japan culture including its rich folklore and religion, every craft, trade, and profession, all types of people and creatures, both real and imagined, and every kind of object.

Meiji-period (1868-1912) ivory ojime (bead) used to pull taut the strings of an inro (small decorative box used to hold valuables), thus keeping the inro securely closed. Kimono don't have pockets, so inro were used as the equivalent of a purse or wallet. This skull, about the size of a U.S. 10-cent piece, reflects the basic Buddhist theme of impermanence. ivory wasn't imported on a large scale into Japan until the Meiji period, so ivory handicrafts such as this ojime often date from no earlier than about 1868. Before that time, ojime and netsuke commonly were made of wood.