The car becomes the most valuable motor vehicle ever sold at auction, beating the previous record of £10,086,400 set by a Ferrari in 2011.

Robert Brooks, Bonhams Chairman, said: “I have handled some of the world’s most desirable and important motor cars during a motoring auction career spanning five decades, but I have reached a peak today with this legendary Grand Prix car. It was a personal privilege to preside over the sale of this vehicle, which is not only one of the most significant motor cars of the 20th century, but also the most important historic Grand Prix racing car ever offered for sale.”

Doug Nye, racing historian, said: “If he were here today Fangio would shake his head and smile his slow smile. He was a humble man, originally a mechanic from a potato town in Argentina – and he never forgot his roots. As a driver, he was simply a genius. As a man he had no enemies. He was universally loved, even by those he regularly beat on track. No standard-setting sportsman could have a better epitaph.

“Mercedes has long been recognised for the world-class quality of its products and in 1954/55 they set out to rebuild their reputation for automotive excellence post-war. With this W196 and its sports car sisters they did just that... and how!”

The 2½-litre straight-8 W196 – chassis number ‘00006/54’ – was the car in which Fangio won both the 1954 German and Swiss Grand Prix races. These great victories were the first two to be achieved in succession by the frontier-technology Mercedes-Benz factory Formula 1 team in its post-war racing comeback. Chassis ‘00006’ also has special significance as the first open-wheeled ‘slipper’-bodied post-war Mercedes-Benz to win a Formula 1 Grand Prix race.

The car’s innovative design also marked the successful introduction to Formula 1 of the following technologies:

• Power take-off from the centre of the engine’s long 8-cylinder crankshaft to minimise vibration.

The FIA governing body of international motor sport launched its first post-war Grand Prix regulations in 1954, demanding unsupercharged engines of no more than 2½-litres engine capacity. Mercedes-Benz – who had previously dominated Grand Prix racing in 1908, 1914 and from 1934-39 – missed the first two 1954 World Championship rounds in Argentina and Belgium, but made their shattering debut in the 1954 French Grand Prix at Reims-Gueux.

Their all-new W196 cars ran there in enveloping-bodied ‘Stromlinienwagen’ form, instantly setting new performance standards, with Juan Manuel Fangio and team-mate Karl Kling finishing first and second in both qualifying and the race. National media and the specialist sporting press trumpeted the same simple message: “Mercedes are back!”

After the W196 cars with their enclosed wheels proved difficult to place upon the more twisty venue of the following British Grand Prix at Silverstone, Fangio requested an open-wheeled W196 variant for the following German Grand Prix on the twisty 14.2-mile Nurburgring road circuit. Mercedes-Benz reacted instantly, tailoring new cars ‘00005’ and ‘00006’ to Fangio’s recommendation.

It was in chassis ‘00006’ that Fangio immediately won the German Grand Prix. He then repeated the feat in the following Swiss Grand Prix on the daunting Bremgarten forest circuit at Berne – storming round at uncatchable pace in ‘00006’ to win by 58.7 seconds from Argentine compatriot Jose Froilan Gonzalez’s out-classed Ferrari. This Swiss victory was Fangio’s third in four Grand Prix races, and assured him of his second Drivers’ World Championship title. 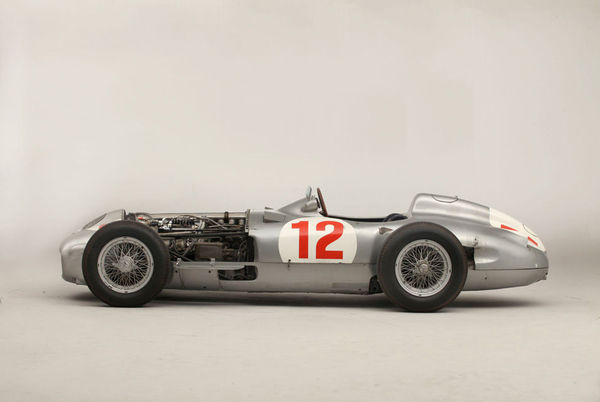