This stemcup lacks the bow-string bands that can be seen in various illustrated examples housed in famous museum collections and items such as the ones pubblished in J. Chapman, The Art of Rhinoceros Carving in China, London 1999 - For a similar rhinoceros carving from the Palace Museum collections Beijing, see zijinfeng Feb. 2007, p. 105. 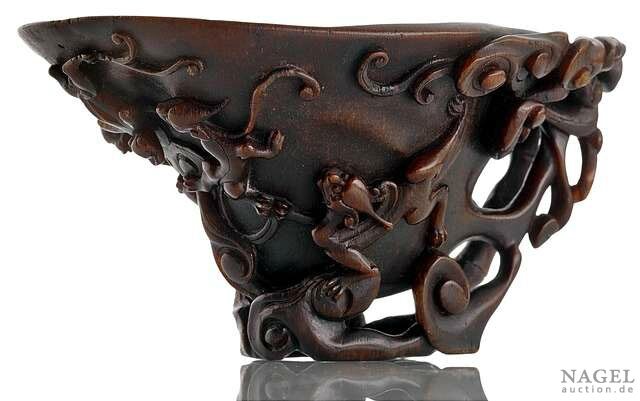 of dark brown tone and conical form, the interior with stepped ridges forming the outline of a 'lingzhi'-head, on the exterior with several 'chilong'-dragon btween bamboo, the handle and base carved in openwork of bamboo rods and further 'lingzhi'. Very slightly chipped, minor restorations to stand and rim. H./D. 8,5/17 cm. Estimate 20 000 - 30 000 €.

From the property of an old German noble family,bought in 1907 by the grandfather of the present owner onthe occasion of a Chinese journey. of oval form, the interior carved as a vine leaf with serrated border and characteristic finnings, the exterior all over carved in relief and openwork in form of grapes, vine leafs and grape wines which partly extended to the interior of the cup, base and handle in thesame decoration. H./D. 7/15 cm. Partly wear, minor restoration. Estimate 20 000 - 30 000 €.

From the property of an old Berlin private collection, bought in the earlt 1980/s from the present owner.