CHICAGO, IL.- A Chinese bronze ritual gong vessel sold for $722,500 on Wednesday at Leslie Hindman Auctioneers’ sale of Asian Works of Art from the Collection of Phillip and Kay Cha. The auction brought international collectors out in force, staking their claim on Chinese works of art assembled by the couple over a period of over thirty years. The sale included paintings, ceramics and furniture from both the Chas’ private collection and Asian House, their Chicago gallery. the beast form vessel having a fitted cover depicting the animal's scrolled horns above protruding round eyes, the face with C-scrolls and flanked by small tapering ears, the back surmounted by scrolled upright flanges, the handle with incised ribs and terminating in wings, and the body with sinuous beasts over a leiwen ground, with taotie masks having prominent, round eyes separated by knotched vertical flanges, raised on the flared, square base with scrolled, confronting beasts separated by vertical flanges, bearing multiple inscriptions. Height 12 5/8 inches.

The auction’s top three lots alone grossed more than a million dollars. The gong vessel attracted numerous buyers who flew into Chicago to view it firsthand, and had been in the Chas’ personal collection for several years after having been purchased decades ago from the storied Gurie Gallery in Montreal. A gui vessel, also with Gurie Gallery provenance, sold for $266,500, and a yu, an unusual ritual vessel covered with pointed bosses, brought $182,500. Each of these bronzes bear archaic inscriptions and were part of the Chas’ personal collection, kept and admired in their Chicago home for several years. 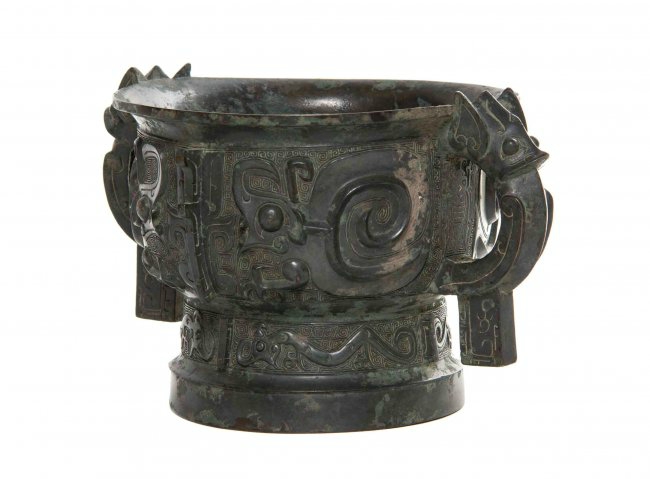 of circular footed form having traces of lacquer, the deeply cast bowl with raised and pointed bosses within a diamond pattern matrix of incised lines, raised on a pedestal foot. Height 6 1/4 x diameter 9 3/4 inches.

“Mr. and Mrs. Cha are two of the warmest, most generous, and intelligent people that anyone could meet. The success of this auction reflects their discerning taste and intuition in this field,” said Phyllis Kao, Director of Asian Works of Art.

Another highlight of the sale was an important Chinese painting on silk, which sold for $55,440 after a long struggle between telephone and online bidders. The painting depicts Vanavasa meditating in a grotto, and once hung in the Chas’ sitting room. depicting the luohan meditating in the hollow of a grotto, with bare trees depicted behind the cave, the monk wearing hoop earrings and florally patterned, hooded robes, his shoes placed outside the cave entrance and facing the mountain pass; laid to board and framed. Height 33 x width 17 inches.