This striking depiction of The Crucifixion is an early masterpiece by El Greco, painted in around 1576-78, during the period immediately following the artist’s arrival in Spain. Although the work was published as El Greco by Calvert and Hartley as early as 1909, for much of the 20thcentury (whilst in the distinguished collection of Don Félix Fernández Valdés, Bilbao) it remained hidden to scholars, and only following its recent re-emergence and cleaning has it been rightfully restored to the oeuvre of one of the greatest and most idiosyncratic painters of Western art. 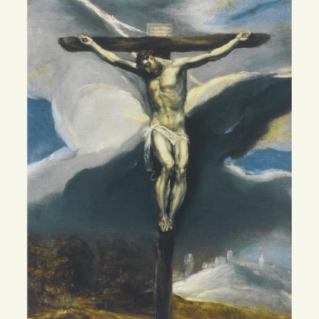 El Greco’s Crucifixion is the culmination of a group of four related small-scale treatments of the subject painted by the artist between around 1573 and 1578. The other three variants, which are each painted on different supports, are: a signed version on canvas (43 by 28 cm.) in a North American private collection, sold New York, Christie’s, 31 January 1997, lot 217, for $3,605,000; a version on copper (35 by 26.7 cm.), today in a private collection, Texas (see left (c) Private Collection,Texas); and a version on panel (30.5 by 19.8 cm.), formerly in the collection of Dr. Gregorio Marañon, Madrid, and today in the Caja Castilla La Mancha, Toledo.1

The present work is closest in type and composition to the version on canvas in a North American private collection, which is approximately a third smaller in size (43 by 28 cm. versus 67.5 by 42 cm.). Both paintings share a similar treatment and handling (unlike the copper panel which is far smoother in execution), however El Greco has made a number of modifications to his earlier design and darkened the overall palette to perhaps signify a more advanced moment in the narrative when Christ has expired and, as recounted by the synoptic gospels, a darkness began to fall over the whole land. The figure of Christ on the cross is set further back within the landscape, with a far greater expanse of sky above Him, which serves to heighten His sense of isolation within a setting that he no longer dominates, as in the other versions. The dramatic swathe of black cloud, that in the two versions in America fall diagonally across the figure of Christ, here envelops much of His body to provide a striking backdrop and contrast to His starkly lit figure, emphasizing His moment of sacrifice. The arms of Christ are also raised somewhat higher than in the other versions to accentuate the weight of the slumped and lifeless body of Christ, enabling more of the celestial shafts of light to show through between the figure and the lateral bar of the cross. The tonality of the present version is characterised by a greater use of lilac than in the bluer North American canvas, a colour which El Greco had a particular predilection for during his formative years, as attested by his small treatment on copper of The Stigmatization of Saint Francis of circa 1570-72 in the Zuloaga Collection, Spain.2

With regard to chronology and dating, the late Professor Alvarez Lopera (to whom the present work was unknown) proposed a dating for the two versions in America to circa 1573-4, before El Greco left Italy for Spain, whilst he surmised that the version on panel may be a little later, circa 1573-76. Leading El Greco scholars today believe the present, larger treatment, to be somewhat more advanced in date and in all probability executed circa 1576-78, in the period immediately following El Greco’s arrival in Spain. A number of sources of inspiration have been proposed for El Greco’s design of The Crucifixion. Roberto Longhi was the first to point out similarities in the powerful treatment and modelling of the body with drawings by Michelangelo dating from the 1540s, such as the celebrated work commissioned by Vittoria Colonna today in the British Museum. In 2002 however, Fabianski rightly drew comparison with a far closer prototype, a small sculpture by Giambologna, datable before 1573, which exists in various casts including those in the Palacio de Apostoles, Loreto and the National Gallery, Prague (see left, (c) National Gallery in Prague 2014)).3 In both El Greco’s painting and Giambologna’s sculpture, the model for the figure, the movement, the proportions, as well as details such as the fall of the head on the right shoulder, are almost identical and there seems little doubt that the palpable sense of three-dimensionality that Greco achieves in his treatments of The Crucifixion is inspired through direct study of the sculpture. For the landscape El Greco was seemingly inspired by works by Titian, in whose studio he almost certainly worked during the early 1570s, such as the great Venetian master’s Crucifixion of circa 1554 in the Monasterio del Escorial.

The death of Christ on the cross is the central image in Christian art and the visual focus of Christian contemplation. It signifies the potential moment of man’s redemption and delivery from the original sin of Adam which all mankind inherited. El Greco’s interpretation of the subject is rendered in his own highly personal and idiosyncratic style and the rediscovery of this masterpiece represents a significant addition to the known corpus of work from the period immediately following El Greco's arrival in Spain.

This painting will be included in the forthcoming exhibition El Greco: Arte y Oficio, to be held in the Museo de Santa Cruz, Toledo, on 8 September - 9 December 2014, as part of the cultural programme to mark the fourth centenary of El Greco's death.