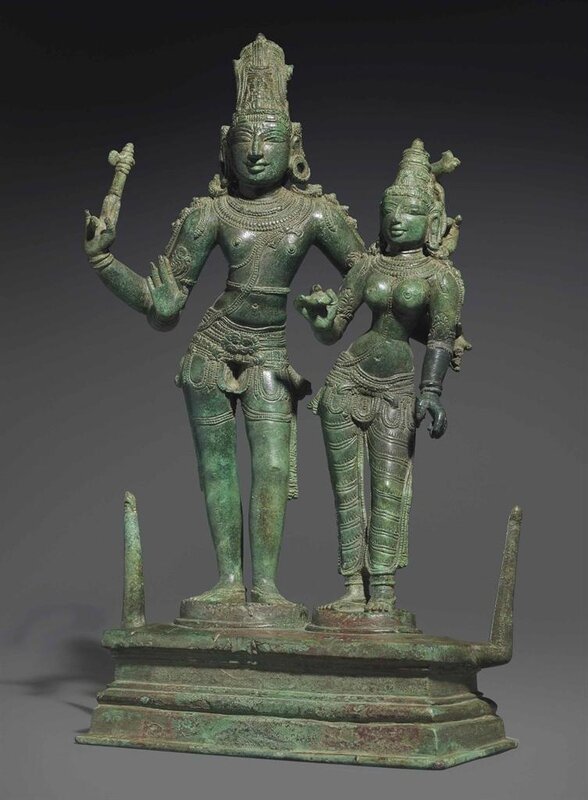 Both standing in tribhanga on a separately cast rectangular stepped base, Shiva with his principle right hand inabhayamudra while the left embraces Parvati, his upper hands holding the axe and antelope, she with her left arm outstretched along the body and her right hand clasped, both clad in dhotis, bejewelled, their faces in benevolent expressions with almond-shaped eyes, with a rich green patina overall - 16 in. (42 cm.) high

Provenance: Private Collection, Italy, acquired in Bombay in 1960's
Acquired in London in 2000

Notes: South Indian temples were built to house the most spiritually important sculpture in the inner sanctums that were only accessible to priests during the year. Portable bronze sculptures, including the present example, were created to allow the populous to experience darshan, the practice of seeing and being seen by the deities to facilitate the exchange of blessings. This exchange took place once a year during a processional held in honor of each specific deity. The rest of the year, the sculpture would remain under the care of the priests in the temple's inner sanctum. In preparation fordarshan, the sculptures would be ritually bathed before being dressed and carried in procession. The Chinese pilgrim Yi Jing (I-tsing), who travelled in India from 671 to 695, recounts his eyewitness description of the practice: "...images, whether large or small, are to be brightened by rubbing them with fine ashes or brick powder, and pouring pure water over them, until they become perfectly clear and beautiful like a mirror," (J. Takakusu (trans.), I-tsing. A record of the Buddhist Religion as Practised in India and the Malay Archipelago AD 61-695, London, 1896, p. 150). Compare the present work with a slightly earlier Chola period sculpture of Shiva Embracing his Consort Uma in the Metropolitan Museum of Art (2000.284.2).