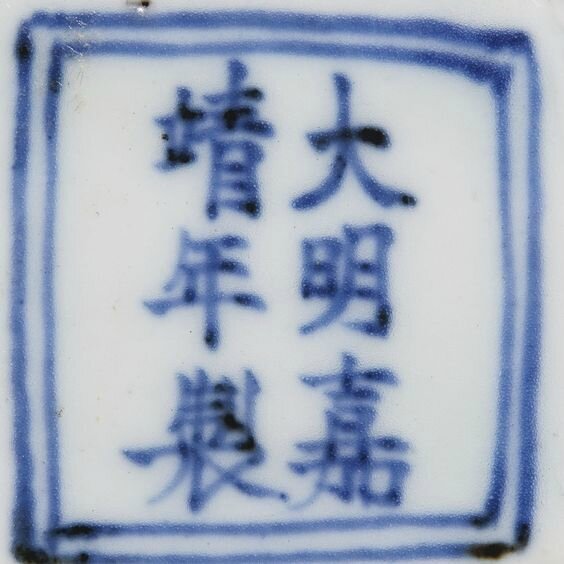 the square baluster body rising from a recessed base to a short neck with everted rim, brightly painted and enamelled around the exterior with the bajixiang and lotus strapwork, all between a lotus lappet band at the base and a ruyi collar, the neck with a classic scroll band, wood stand. Quantité: 2 - 12.5 cm, 4 7/8  in.

From the Joseph M. Morpurgo collection

Note: Jars of this square form were an innovation of the Jiajing period, which required the utmost precision when potting and firing as they were made from a mould. A closely related jar, included in the exhibition Chinese Porcelain. The S.C. Ko Tianminlou Collection, Hong Kong Museum of Art, Hong Kong, 1987, cat. no. 72, was sold in our Hong Kong rooms, 19th November 1986, lot 213; two were sold in these rooms, the first, from the collection of Stephen D. Winkworth, 25th April 1933, lot 347, and the second, with its matching cover, from the collection of Lord Hollenden, 27th November 1973, lot 297; and a further two jars were sold at Christie’s London, 21st April 1986, lot 412 and 413, the former sold again in these rooms, 12th December 1989, lot 309.

This motif continued to be popular in the succeeding Wanli reign, when it was used on jars of globular shape; see for example a Wanli mark and period jar, illustrated in Lu Minghua, Mingdai guanyao ciqi [Ming imperial porcelain], Shanghai, 2007, pl. 4-23; and another, from the collection of Kwong Yee Che Tong, included in the exhibition The Fame of Flame. Imperial Wares of the Jiajing and Wanli Periods, Art Gallery, The Chinese University of Hong Kong, Hong Kong, 2009, cat. no. 107.