"Slow Food: Still Lifes of the Golden Age" opens at the Mauritshuis in The Hague

"Slow Food: Still Lifes of the Golden Age" opens at the Mauritshuis in The Hague Clara Peeters (Active in Antwerpen, c.1607-1621 of later), Still Life with Cheeses, Almonds and Pretzels, c. 1615, Mauritshuis, The Hague, Purchased by the Mauritshuis with support of the Stichting Vrienden van het Mauritshuis, the BankGiro Loterij, the Vereniging Rembrandt (with help of its A.M. Roeters van Lennep Fonds, Utrechtse Rembrandt Cirkel and Caius Cirkel) and a private individual

HE HAGUE.- From 9 March through 25 June 2017 the Mauritshuis presents Slow Food: Still Lifes of the Golden Age, the first exhibition to be devoted to the development of meal still lifes in Holland and Flanders from 1600 onwards. The cornerstone of the exhibition is a masterpiece acquired by the museum in 2012, Still Life with Cheeses, Almonds and Pretzels by Clara Peeters. The exhibition features 22 masterpieces from Washington’s National Gallery of Art, Rijksmuseum Amsterdam, Oxford’s Ashmolean Museum among others including all the works by Peeters from the Museo Nacional del Prado in Madrid.

The meal still life – a subset of the genre that shows prepared food laid out on a table without figures in the composition - originated around 1600 with painters in Antwerp such as Clara Peeters and Osias Beert. Haarlem-based painters such as Floris van Dijck and Nicolaes Gillis followed them shortly thereafter. Meal still lifes showing richly set tables piled high with tempting morsels and precious objects became increasingly popular in the first decades of the seventeenth century. Various artists eagerly devoted themselves to depicting the objects on display in great detail. The exhibition in the Mauritshuis features paintings from the early years of this genre, the period 1600-1640. Astonishing detail
Masters of the meal still life depicted refined delicacies such as fish, oysters, prawns, cheese, bread, olives and nuts, offset by fine glassware, gilded goblets, pottery jugs or oriental porcelain. The way in which the details have been rendered is a feat of extraordinary precision, as is the play of light on the various materials. Peeters succeeds in replicating the somewhat crumbly texture of the biggest cheese and the creaminess of the butter curls on the plate with great accuracy in her Still Life with Cheeses, Almonds and Pretzels. The delicate play of light on the blade of the knife is also beautifully rendered. Virtuosity is also on display in the work of Claesz and Heda. In Heda’s impressive Still Life with Gilt Goblet dated 1635, for example, the suggestion of reflected light on the large glass is magnificent. The glass not only reflects the rays of light coming in through a window, but also the muted sheen of a silver tazza (shallow drinking bowl) and a gilded goblet. The reflection resembles a fine mesh on the glass and is a superb example of the craftsmanship that is so characteristic of these early meal still lifes. Interpretation
The delicacies and precious objects shown in the meal still lifes evoke a utopian world free of hunger and need. The paintings often incorporate a sense of mortality, of the transience of earthly life. This vanitas symbolism is made explicit in the meal still lifes by Claesz and Heda, each of whom include a timepiece in their compositions. At the same time, a good meal also symbolises prosperity and well-being. It is possible that the cornucopia of food shown in the paintings was also intended as an exhortation to moderation. In a number of paintings by Peeters, for example, a knife with the word ‘TEMP[ERANTIA]’ (moderation) on its blade figures prominently. Her aim may have been to impart a deeper meaning to her compositions 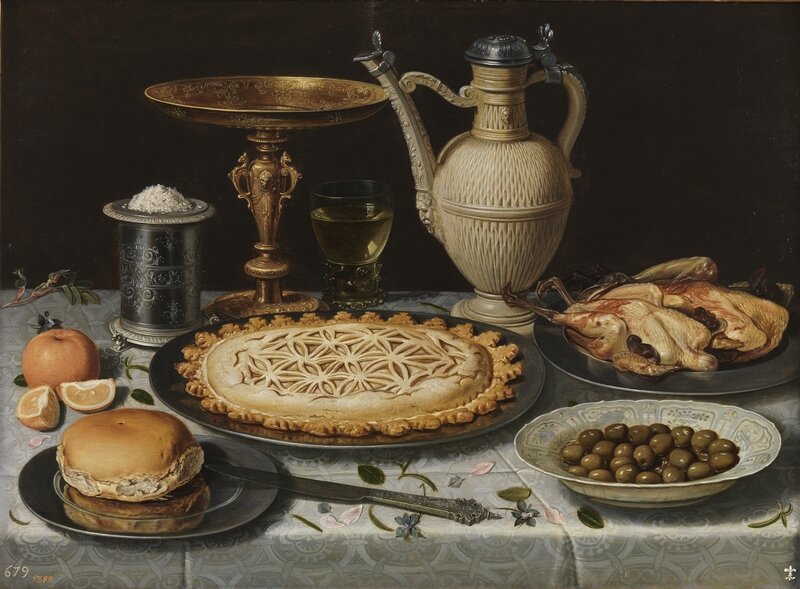 Mini food festivals
The museum will organise a series of small-scale food festivals during the exhibition, which will centre on the delicacies depicted in the paintings. A range of activities focused on food and drink will also take place on four Saturdays during the exhibition. Each edition will focus on a different theme: 18 March – bread & cheese 22 April – meat & fish, 20 May – drinks & glassware,, 17 June – fruit & vegetables. For the duration of the exhibition there will be a greenhouse on the square of the Mauritshuis: Taste Station MH. Commentaires sur "Slow Food: Still Lifes of the Golden Age" opens at the Mauritshuis in The Hague