Willem Claesz. Heda, A banquet piece with an overturned tazza and oysters

Willem Claesz. Heda, A banquet piece with an overturned tazza and oysters Note: Willem Claesz. Heda’s still lifes are among the greatest achievements of the Dutch Golden Age, and this magnificently refined example, signed and dated 1635, ranks among the best of his lengthy and successful career. Using a seamless balance of simple and expensive objects in the present painting, Heda captures such enormous richness and complexity that a striking sense of monumentality envelops the scene. His muted palette allowed for a greater attention to be placed on the visual effects of refracted and reflected light, one of Heda’s greatest interests. Here, a golden light shining from the left softly falls over the objects, from the delicate glassware bottle near the left edge, to the variegated edges of the oysters, to the richly patterned surface of the overturned tazza, while the panes of a window reflected in the roemer reveal the ultimate source of this illumination.

Alongside Pieter Claesz., Heda was one of the leading still-life artists in Haarlem, active until well into the third quarter of the seventeenth century. His earliest painting dates from 1621, though it is his output of the mid 1630s that displays his greatest maturity. While Heda took special care in imbuing each scene with a degree of individuality, specific objects reappear in works of comparable dates. For example, the same roemer and overturned tazza appear in two still lifes by Heda in the Rijksmuseum, Amsterdam, one dated 1634 (fig. 1)1 and the other dating 1635 (fig. 2),2 the latter of which also includes similar pewter plates of oysters, the swirl gadrooned glass vessel, and a paper twist of tobacco. In addition, similar objects appear in a comparable still life of 1636 by Heda’s contemporary, Pieter Claesz., today in the Mauritshuis (fig. 3).3 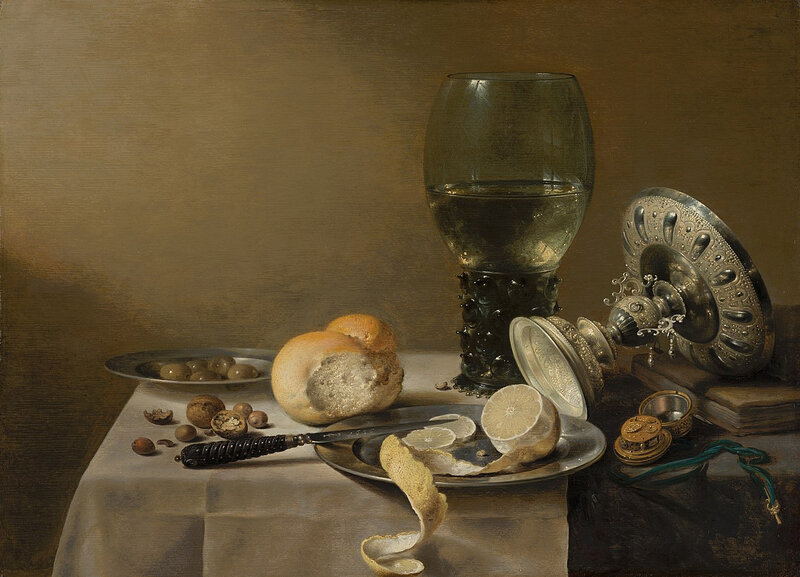 Vroom was the first to identify the present painting as once being in the Dollfus collection, alongside another painting by Heda of nearly the same dimensions that was signed and dated 1649. That other painting is now in the collection of the Municipal Museum in Ghent. Though composed in a similar manner, that painting includes a scene in which the bulk of the objects lie on the right half of the composition, with the more spare table edge filling the left edge. It is likely, therefore, that Vroom incorrectly hypothesized that these two paintings were pairs, even though the present panel is signed and dated to over a decade prior.