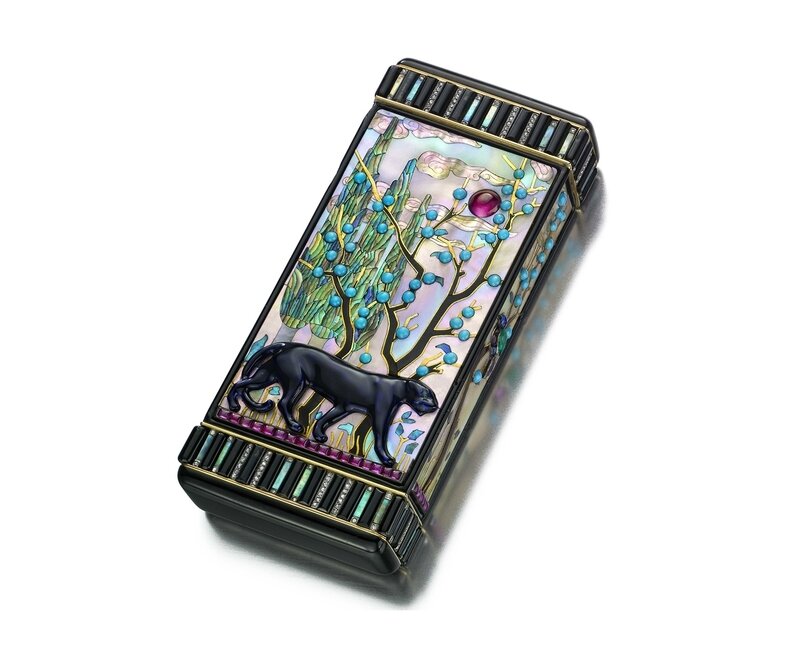 NEW YORK, NY.- “Jeweled Splendors of the Art Deco Era: The Prince and Princess Sadruddin Aga Khan Collection” at Cooper Hewitt, Smithsonian Design Museum features more than 100 extraordinary examples of luxury cigarette and vanity cases, compacts, clocks and other objects. On view in the Carnegie Mansion’s Teak Room from April 7 through Aug. 27, the collection includes exquisite work from the premier jewelry houses of Europe and America—among them Cartier, Van Cleef & Arpels, Lacloche Frères, Boucheron and Bulgari—dating from 1910 to 1938.

“A collection with a rich and storied history, these magnificent works represent the foremost craftsmanship of their era,” said Cooper Hewitt Director Caroline Baumann. “With exotic motifs exquisitely formed with the finest jewels, metals and precious stones, these boxes, timepieces and jewelry also are virtuosic demonstrations of artistic expressivity and mastery of ancient techniques. Concurrently on view in association with ‘The Jazz Age: American Style in the 1920s,’ this exhibition offers an unprecedented opportunity to see these objects in the context of the dramatic societal and technological changes impacting the world during this pivotal moment in early modern history.”

Personal gifts from Prince Sadruddin Aga Khan (1933–2003) to his wife, Catherine (b. 1938), the collection was amassed over three decades and displays the excitement, innovation and creativity of the Art Deco era at its most luxurious. Born in Paris, Prince Sadruddin was the son of Sir Sultan Mahomed Shah Aga Khan and Princess Andrée Aga Khan. Dedicated to public service, he spent nearly 40 years at the United Nations, including a position as the United Nations High Commissioner for Refugees from 1966 to 1978. In addition to his humanitarian work, Prince Sadruddin was passionate about art, culture and environmental issues.

Vibrant colors, bold forms and exotic motifs mark the collection, with inspiration drawn from the natural world, Eastern cultures and the machine age. Among the works on view are boxes adorned with Chinese dragons, Persian birds and Japanese plum blossoms in a riot of colorful gemstones, alongside starkly elegant boxes stripped of excessive ornamentation inspired by industrial design. A highlight of the objects shown is the Panther Vanity Case by Cartier, which features the sleek figure of a panther set in a lush jungle landscape. Created in 1925 and shown at the Exposition internationale des Arts decoratifs, the colorful and exotic scene exemplifies the 1920s aesthetic. The world’s most renowned jewelry firms created exquisitely crafted vanity cases, called nécessaires, which contained divided interior compartments to conceal face powder, lipsticks and mascara. Designed for the increasingly liberated modern woman asserting her style and independence, these jeweled personal accessories examine the impact of changing femininity. A superb example on view is the 1928 Cypress Tree Vanity Case by Van Cleef & Arpels with an exotic and nature-based motif, which was one of Prince Sadruddin’s earliest box acquisitions. The increasing independence of women in the 1920s coincided with the popularity of women’s watches. On view are pendant necklace-form watches and vanity cases with hidden watches, which offered an unobtrusive way of checking the time. 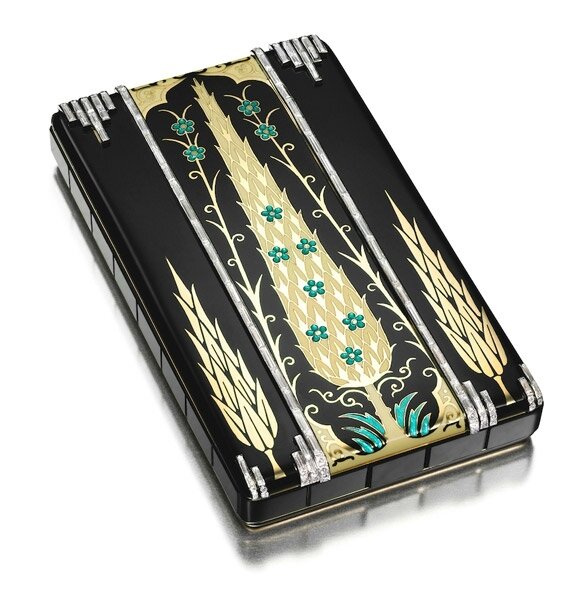 The collection also includes bejeweled timepieces, from large mystery table clocks to small standing watch-form clocks. On view is the 1929 Imperial Guardian Lion mystery clock for Cartier—so named as the minute and hour hands appear to float—with serpent-like dragon hands surrounded by diamond-studded numerals, set on a carved coral stem. The casemakers were often the same as those whose stonework and enameling adorned the cigarette boxes and vanity cases in the collection. The mystery clock would have involved six or seven specialists, including a clock-maker-designer, the orfèvre-boîtier (goldsmith-specialty box maker), the enameler, the lapidary, the stone setter and the polisher.