Saint John the Baptist An extraordinary example of Late Burgundian art
Saint John the Baptist, much beloved and widely venerated during the Middle Ages, is depicted in this sculpture in a formal manner typical of Netherlandish art of the 1400s and early 1500s. The sculpture is impressive for the deeply undercut folds of drapery as well as the saint’s curling hair and beard that achieve an almost photographic realism characteristic of Burgundian and Netherlandish art of this period.

Clear stylistic traits link this sculpture to Jan Crocq, an attribution supported by a consensus of scholars. A native of Antwerp, Crocq is known from documentary sources as a sculptor of wood and stone, active in Barle-Duc and Nancy at the court of René II, Duke of Lorraine, from 1486 to 1510.

Given the museum’s strength in early Burgundian art, the acquisition of Crocq’s superb Saint John the Baptist adds to the collection an example of late Burgundian sculpture in its final evolutionary stage. The sculpture will be on view in the museum’s late medieval galleries by the end of June 2017.

Pre-Columbian Group Six artworks from the central Andes
This group of artworks—ranging from artistically elaborate ceramic vessels and textiles to a small sculpture made of bone—represents the artistic achievements of six ancient cultures that flourished between about 2200 BC and AD 1460 in the central Andes, a region today occupied mainly by Peru.

Vessel with Reclining Figure and Birds Elaborate ceramic vessels are the most copious surviving art form of the Cupisnique (coo-piz-knee-kay), the earliest people of Peru’s north coast. The small size and sculptural complexity of this intriguing example give it the power of a miniature to draw the viewer close. Beneath the spout’s arch is a supine human pecked by the two birds perched on the vessel’s doughnut-shaped chamber; the mythical creatures on the vessel’s spout situate the scene in a cosmic context. Textile Fragment with Cotton Goddess The style of Chavín, an impressive temple center in the central Peruvian highlands, is acclaimed for its early development and cerebral complexity. Examples of Chavín textiles are rare, and this fragment, which may derive from a ceremonial hanging, is famous within the corpus. The image—a standing figure holding staffs of authority to either side of its body—makes copious use of fanged heads, a favored Chavín motif. The white cotton bolls that edge the staffs have caused the figure to be dubbed the Cotton Goddess and to be associated with nature’s fertility.

Double-Spouted Vessel The Paracas style, the earliest of Peru’s south coast, focuses on geometric abstraction and polychromy, the latter achieved in ceramics with resin-based paints applied after the vessel was fired. This example is embellished with two monkey- or feline-like creatures with curvilinear forms that indicate the vessel was made in the late stages of the Paracas sequence. 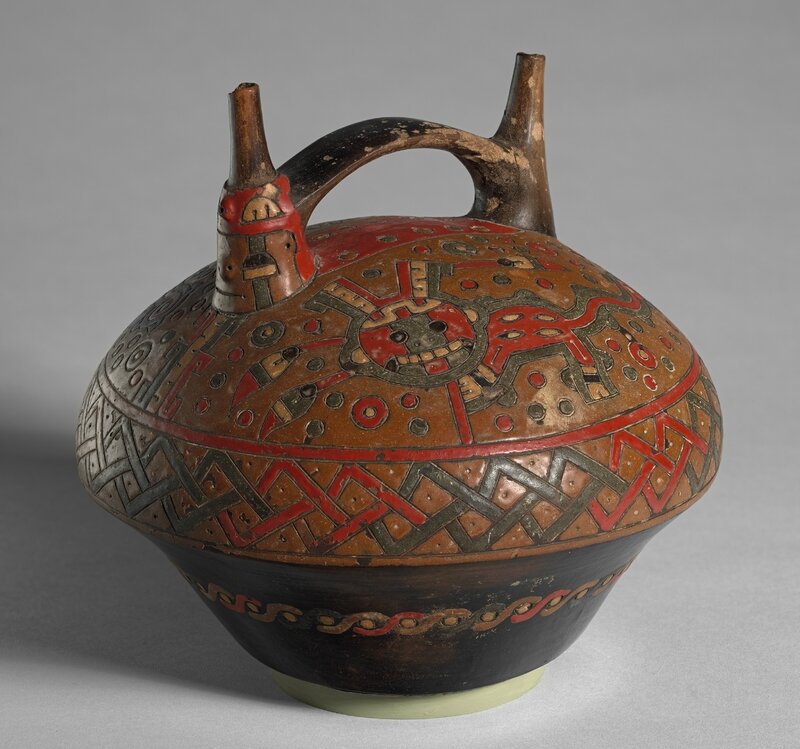 Thumb Rest of a Spear Thrower Made by an artist of the Wari Empire, this beautifully carved small bone object was lashed to the shaft of a spear thrower, serving as the weapon’s thumb rest or grip. The subject matter echoes the function: a supernatural creature with the fanged mouth of an apex predator throttles a small human victim. Depressions were once inlaid with colored stone and shell. Head Cloth The Chancay, who focused their artistic energies mainly on textiles and ceramics, were a major late pre-Hispanic culture of Peru’s central coast. The textile’s size, shape, and two-panel construction indicate it is a head cloth, an important item of women’s wear. This panel is a particularly beautiful example due to its colors, which are reminiscent of twilight when the sky turns a luminous, dark blue and a shimmer of orange light appears on the horizon.

Bound Deer Effigy Vessel Chimú rulers created the first empire on the Peruvian coast. Chimú art forms range from fine textiles to works of wood, bone, shell, and precious metals, but most common are ceramics, which typically were mold-made of unpainted, burnished blackware. Bound stag effigy vessels are a distinct genre within the Chimú corpus, and this is a beautifully realized example. Japanese Edo Porcelain Group
Nabeshima porcelain of the 17th and 18th centuries
Nabeshima porcelain was produced in Hizen Province in Kyushu, Japan’s southernmost island, for the exclusive use of the Shogun in Edo (present-day Tokyo) and his retinue. The finest Japanese porcelain ever produced, Nabeshima represents the pinnacle of Japanese aesthetics as expressed in the medium. The superior quality of Nabeshima ware is related to the highly regulated environment and strict quality controls under which it was produced; the designs were intended to appeal to the uppermost echelon of Japanese society.

Dish with Ginkgo Leaves This shallow dish on a raised, high ring foot is decorated with a complex, abstracted design of ginkgo leaves and “Chinese grasses” (karakusa) that is among the most interesting of the underglaze blue designs of its era. Dishes like this one were produced in sets of five, to be used as part of a larger dining service including sake cups as well as smaller and larger dishes. Dish with Maple Leaves in Waves This shallow dish on a raised, high ring foot is decorated with maple leaves floating on the rough waters of a fast-flowing stream. The foot is decorated with a pattern of three clusters of six-tasseled Chinese coins above a typical comb-tooth design. The dish’s design has been associated with the motif of maple leaves floating on the Tatsuta River found in famous Japanese classical poetry. Dish with Sweet Osmanthus and Cloud This shallow dish on a raised, high ring foot is decorated with a flowering sweet osmanthus (olive tree). A band of mist or clouds floating across the tree completes the composition. The osmanthus tree was imported from China to southern Japan. Contemporary Photograph by Richard Mosse
Visually arresting work addresses the current refugee crisis
The fourteen-foot-long photograph Moria Camp, Lesbos, 2016, is part of Richard Mosse’s series Heat Maps, which looks at the much-documented current refugee crisis in Europe from a new perspective. Mosse’s monumentally scaled images of refugee camps and their settings combine multiple genres of photography, from social documentary and manipulated photography to technological innovation and formal exploration. This is the first work by the artist to enter the museum’s collection.

The works in Heat Maps are manipulated photographs rather than “straight,” produced by digitally stitching together almost a thousand individual frames into a single panoramic scene. The individual images were taken with an extremely high-resolution camera created for militaries to track and target their enemies in border surveillance and combat. It records thermal radiation rather than light, and can detect a human body from 30.3 kilometers away. Through the camera’s eye, humans become biological traces rather than individuals, a condition that echoes the dehumanizing treatment of the refugees.

Mosse chose to output his digital compositions as chromogenic (color photographic) prints on metallic paper. The result is a seemingly monochrome image in which the people and objects have a ghostly presence on the shimmering background. Mosse brilliantly employs a technology of covert surveillance and destruction, using it to broadcast evidence of a global societal ill and encourage constructive action