Leading the sale is A Superb Diamond Ring. The 16.90 carats step-cut diamond is set with round brilliant-cut diamond shoulders and is estimated at US$ 1,600,000-2,200,000 (£1,200,000- 1,700,000). The diamond is certified as D colour, Internally Flawless and classified as Type IIa, meaning that it has been recognised as the most chemically pure and with exceptional optical transparency.

Susan Abeles, Head of Jewellery, Bonhams US, says: "This distinctive stone embodies rarity according to every criterion by which a diamond is measured: colour, cut, clarity and transparency. Type IIa diamonds make up less than two per cent of all natural diamonds and are extremely rare. This is a phenomenal specimen and its crystal limpid characteristics will attract clients who are searching for the finest example of a diamond to add to their jewellery collection."

Many of the most famous diamonds throughout history have been Type IIa: the world's largest cut diamond – the Cullinan, the Koh-i-Noor and the Hope Diamond.

The second notable lot is An Important Sapphire and Diamond Ring. The oval-shaped sapphire, weighing 7.54 carats, set within a surround of round brilliant-cut diamonds, is estimated at US$ 375,000-575,000 (£290,000-450,000). It is accompanied by two reports stating that the sapphire is of Kashmir origin and has no indication of heat. 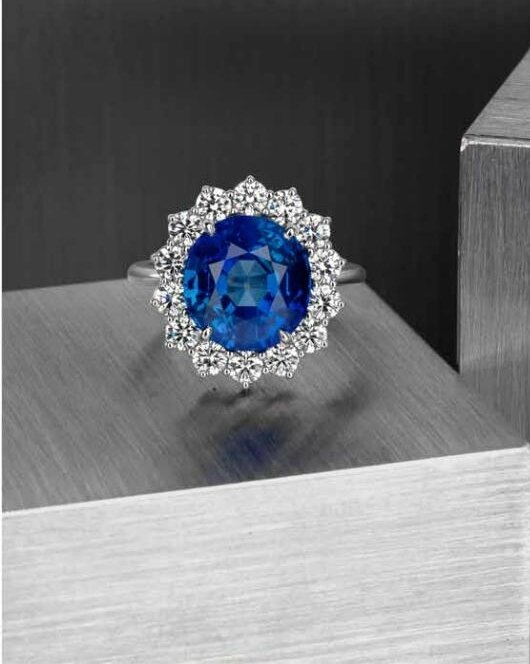 The sale also features a number of other Kashmir sapphires. These include:

A sapphire and diamond ring by Stephen Russell. Featuring a sugarloaf cabochon sapphire, weighing 5.33 carats, set within a frame of old European cut diamonds, it is estimated at US$ 150,000-250,000 (£120,000-190,000). It is accompanied by an AGL report stating the sapphire as: Classic Kashmir origin, no indications of heat or clarity enhancement. 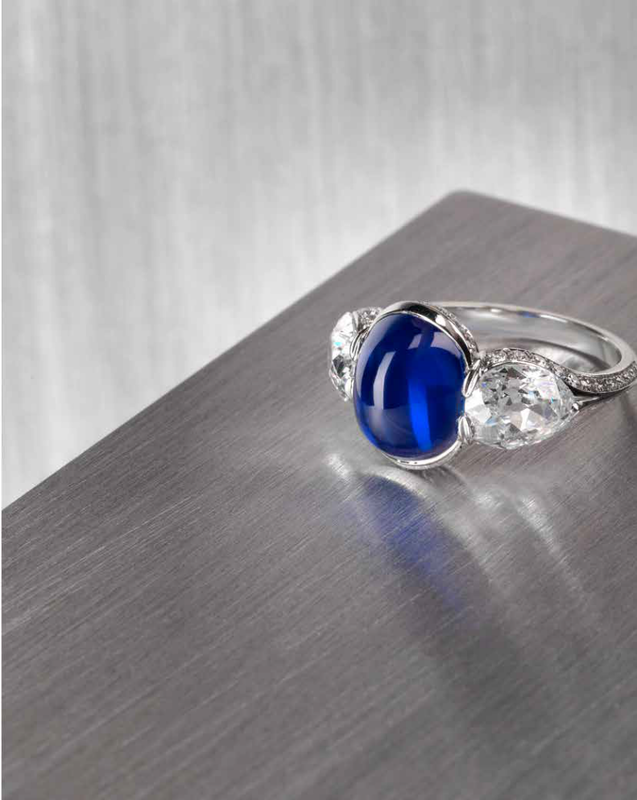 A sapphire and diamond ring. This ring features a mixed-cut Kashmir sapphire, weighing 1.66 carats, flanked by two old European-cut diamonds, weighing approximately 2.50 carats, set throughout with similarly cut diamonds. It is also accompanied by an AGL stating the sapphire has no indications of heat or clarity enhancement and has a pre-sale estimate of US$ 28,000-35,000 (£22,000-27,000). Staying with colour, Bonhams will also be offering a number of lots featuring emeralds in its sale which takes place at Bonhams New York on Tuesday 19th September at 1pm EDT. The top lot in this section is An Emerald and Fancy Coloured diamond ring estimated at US$ 200,000 - 300,000 (£160,000 - 230,000). The ring features an oval-shaped modified brilliant-cut emerald, weighing 7.00 carats, flanked by similarly cut Fancy Vivid Yellow diamonds. The emerald is Colombian origin and the Fancy Vivid Yellow diamonds weigh 1.09 carats and 1.04 carats and are VVS2 and VS1 clarity respectively. One of the largest coloured stones to be offered in the sale is A Rare Black Opal and Diamond Pendant/Brooch estimated at US$ 200,000-300,000 (£160,000-230,000). This extraordinary opal, weighing approximately 48.80 carats, is set within an old European-cut diamond frame and originates from Australia, the primary source of black opals.

Susan Abeles adds: "The most rare opals display a very vivid play of colour which ranges across the entire spectrum and are rarely found in large sizes.

"This stone exhibits a remarkable confetti explosion of red, orange, blue and green flashes. This, combined with its significant size, sets this opal in a unique league and makes it a prized gemstone." Signed jewellery set to catch the eye of discerning collectors

Harry Winston, Cartier, René Lalique and David Webb are just some of the signed pieces to feature in the sale. Highlighted lots include:

An Important Diamond and Ruby Bracelet by Harry Winston, estimated at US$ 180,000-250,000 (£140,000-190,000). The bracelet is designed as a series of floral clusters, centrally set with round brilliant-cut diamonds, framed by pear-shaped diamonds, alternating with oval and cushion-shaped Burmese (Myanmar) rubies. The rubies have no indications of heat or clarity enhancement. A pair of Diamond and Fancy Coloured Diamond Earrings by Harry Winston estimated at US$ 75,000-95,000 (£58,000-74,000). Extremely elegant, each earring suspends a pear-shaped brilliant-cut Fancy Yellow diamond, weighing 3.46 carats, to a hexagonal-shaped diamond, the other earring of reverse design, set with a pear-shaped diamond, weighing 3.10 carats, to a hexagonal-shaped yellow diamond. An Art Deco Diamond Brooch by Raymond Templier, circa 1930, estimated US$ 50,000-70,000 (£39,000-54,000). Raymond Templier was a pioneering jewellery artist of the Art Deco era whose dramatic avant-garde jewellery is highly sought after today. This spectacular brooch is of geometric design and features dramatic curvings, creating a three dimensional, sculptural effect. It is set throughout with old mine-cut diamonds. An Enamel and Glass Medusa Pendant by René Lalique, circa 1905, estimated at US$ 30,000-50,000 (£23,000-39,000). Instrumental in defining the aesthetic of the Art Nouveau style, Lalique jewellery is synonymous with creativity, beauty and quality. In his jewellery, Lalique fused the creation of new themes and forms with certain materials little used at the time. Lalique was known for portraying women in an ethereal profile with undulating hair, specifically Medusa, who is represented in this piece. 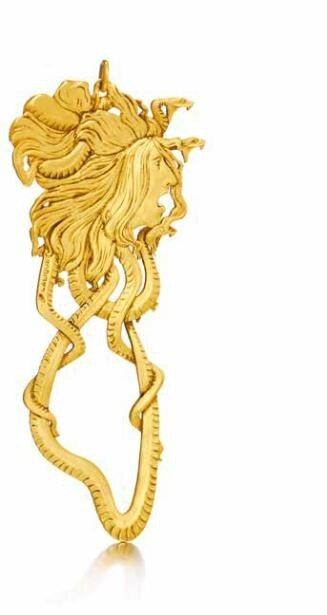 Fine jewellery from the personal collection of Gigi Guggenheim Danziger, wife of the former owner of Cartier Paris

Fine jewellery from the personal collection of Gigi Guggenheim Danziger will go under the hammer for the first time at the September sale. The collection features 32 pieces of fine jewellery, with the earliest piece dating back to 1957. It includes a number of signed Cartier pieces from the 1960s and 1970s when the Danziger family owned Cartier Paris. Highlights include:

A diamond necklace by Cartier. This centres on three rectangular-shaped diamonds, weighing 1.92, 1.66 and 1.33 carats, set throughout with round brilliant-cut diamonds. This has a pre-sale estimate of US$30,000-50,000. A ruby and diamond brooch by Cartier. This centres a rectangular-shaped step-cut diamond, weighing 4.24 carats, within a cluster of pear-shaped rubies, accented by marquise-shaped diamonds. This was given to Gigi Guggenheim Danziger as an anniversary present and Gigi wore it to the London premiere of The Godfather. It has a pre-sale estimate of US$30,000-50,000.

A sapphire and diamond brooch by Cartier. This centres a cushion-shaped modified step-cut, weighing approximately 7.10 carats, within a cluster of marquise and pear-shaped diamonds. Gigi was given this brooch by her husband in the South of France during a family vacation. It has a pre-sale estimate of US$30,000-40,000. Lot 121. From the personal collection of Gigi Guggenheim Danziger, wife of the former owner of Cartier Paris. A 7.10 carats Ceylon sapphire and diamond brooch by Cartier. Photo Bonhams.

Susan Abeles, Head of Jewellery for Bonhams US, says: "We have a really interesting sale this September which features best in class colourless diamonds, Fancy coloured diamonds, Kashmir sapphires and some really wonderful examples of signed jewellery by world renowned houses and designers which are always in demand."

And finally...an $8 garage sale brooch set to hit the headlines

Susan Abeles and her team will be eagerly watching how one particular lot performs in the sale given its fascinating provenance. Lot 24, A diamond, emerald and ruby brooch, circa 1900, was purchased at a garage sale in Ohio a number of years ago for $8.00. The owner gave the brooch to her daughter to wear for church. Reluctant to take it, the daughter placed it at the bottom of her purse and did not give it a second thought. On a chance visit to a jeweller many months later, she pulled out the brooch and was sharing the story about how she acquired it. To her complete surprise, she was told the brooch was not costume, it was real.

Bonhams was then approached and its jewellery experts sent the stones in the brooch to be tested by the Gemological Institute of America and reports confirmed they were gem quality and of the highest standard. Delighted with the news, the brooch was consigned for auction and has a pre-sale estimate of US$ 20,000 - 30,000 (£16,000 - 23,000). Set throughout with old European-cut diamonds, the brooch features an old mine-cut diamond, D colour, VS1 clarity, weighing 1.39 carats, a rectangular-shaped emerald originating from Colombia, weighing approximately 1.50 carats, an oval-shaped Burmese ruby, weighing approximately 0.60 carat.