The censer is decorated in repousse on each side in a central band with various mythical sea creatures including winged dragons and horses rising from waves, all in relief, finely chased and gilt against a dark ground, between bands of silver-inlaid keyfret around the neck and foot, flanked on either side by dragon-head loop handles, cast with a rectangular gilt panel on the base bearing the mark.

Note: The current censer displays remarkable workmanship combining several complex decorative techniques, including inlay of silver wires, chasing of the wavy ground and hammering of gilt decorations on the main band. The engraved seal mark, Yunjian Hu Wenming zhi, may be translated, ‘made by Hu Wenming of Yunjian (modern Songjiang, near Shanghai)’. Hu Wenming was a celebrated metalworker who was active during the late 16th to early 17th century. The same mark can be found on a slightly smaller censer with similar decoration in the main band and with similar handles, in the Palace Museum Collection and listed as a ‘national first-grade cultural relic’, illustrated in Illustrated Important Chinese Cultural Relics Ranking Standard- Bronze, Beijing, 2006, pl. 143 (fig. 1). 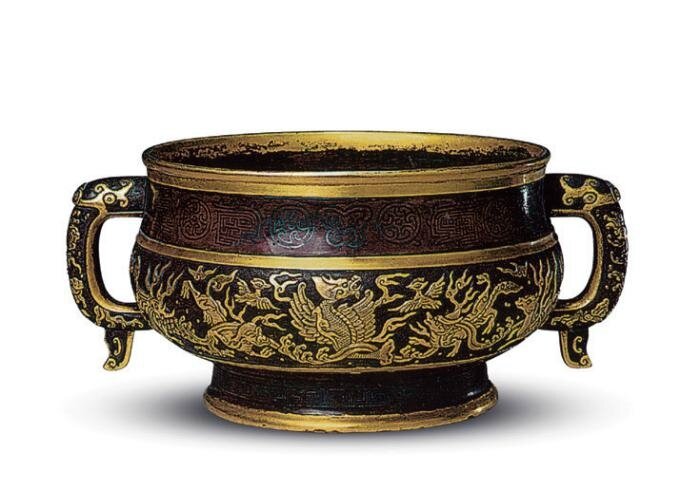