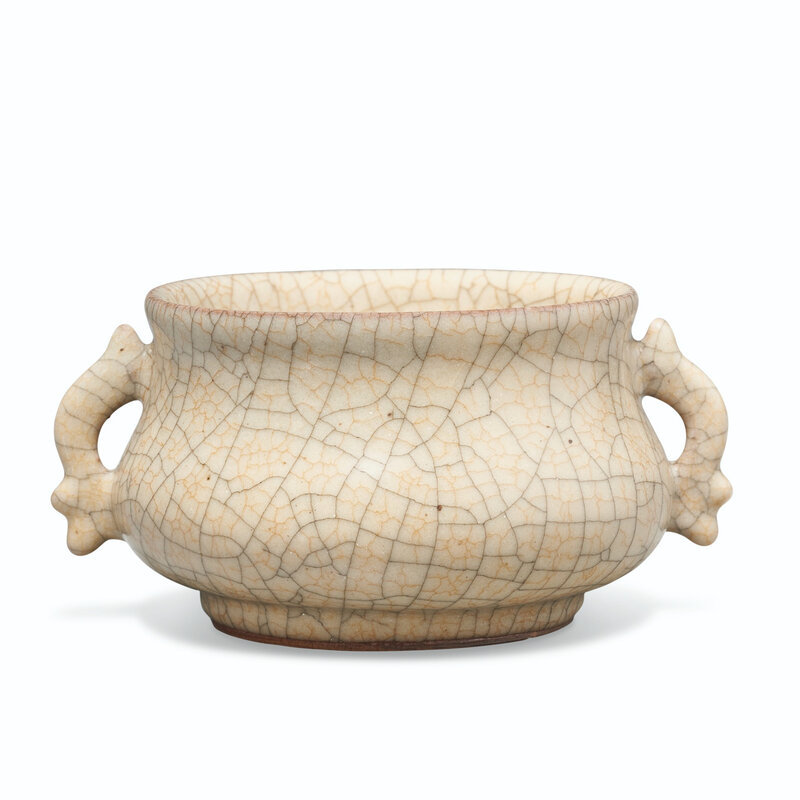 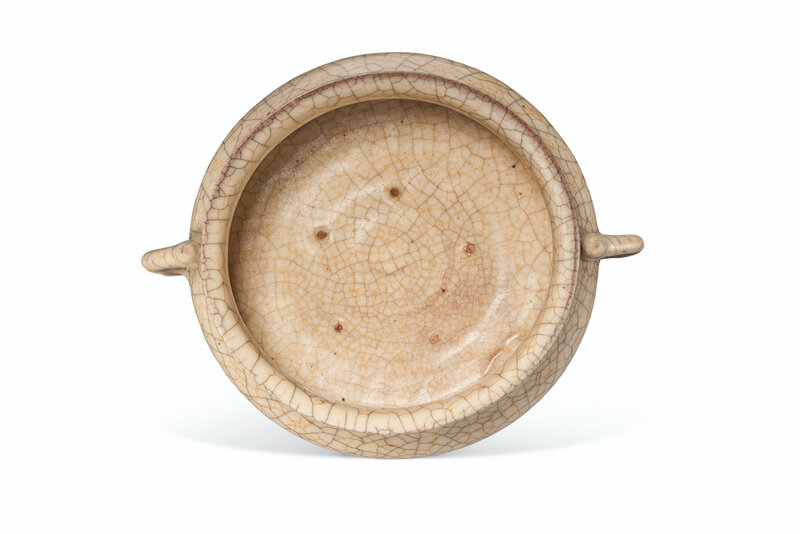 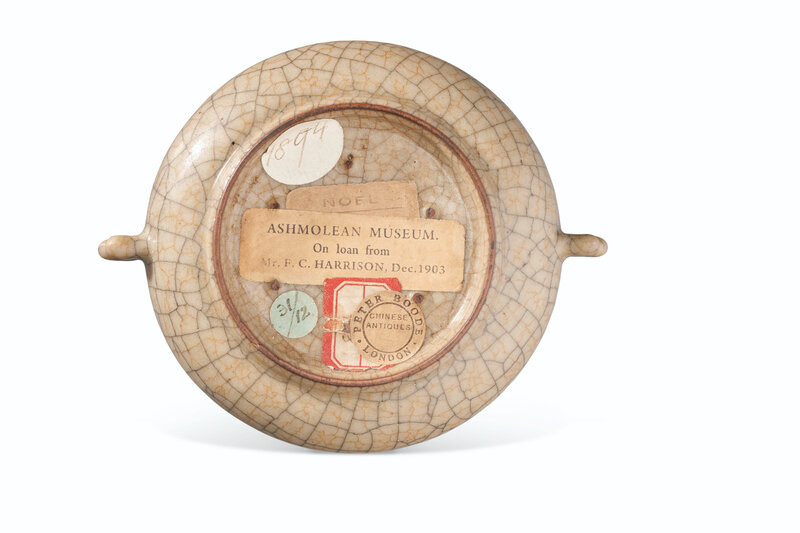 The censer has a compressed globular body raised on a short foot and is flanked by a pair of stylized fish-form handles, covered overall in a thick greyish-cream glaze with a network of 'iron' crackle suffused with a tighter network of reddish-gold-tone crackle.

Note: Ge ware, along with Guan, Ru, Ding and Jun, comprise the ‘five famous wares of the Song dynasty’. The issues of distinguishing the two crackled Southern wares, Guan and Ge ware, were discussed at length during a three-day conference held at the Shanghai Museum in October 1992, and while no unanimity of opinion was reached, it was generally thought that those wares with a double jinsi tiexian (‘gold thread and iron wire’) crackle should be designated ‘Ge’ (R. Scott, “Guan or Ge Ware?”, Oriental Art, Summer 1993, pp. 12-23).

This small censer exhibits the fine qualities of Ge ware, with thin gold and red crackles woven in a web across the surface. Examples of Ge censers of related shape with fish-form handles can be found in museum collections such as three in the National Palace Museum, Taipei, illustrated in Precious as the Morning Star: 12th-14th Century Celadons in the Qing Court Collection, Taipei, 2016, pp. 232-239, nos. IV-16, IV-17, IV-18, as well as three in the Palace Museum, Beijing, illustrated in Selection of Ge Ware, The Palace Museum Collection and Archeological Discoveries, Beijing, 2017, pp. 52-57, nos. 16-18. Also see one in the Percival David Collection, illustrated in Catalogue of the International Exhibition of Chinese Art, London, 1935, pp. 65 and 84, no. 855. Like the present censer, which has five spur marks on the interior, many of these similar examples include between four to six spur marks on the interior.

Ge and Guan wares were not only appreciated in their own era, but have been treasured by Chinese emperors of succeeding dynasties, as well as by less exalted collectors right up to the present day. The high regard in which such pieces were held by the Qing dynasty Emperor Qianlong (1736-1795), for instance, is demonstrated by the text of some of the inscriptions which were applied on both Ge and Guan wares in the Qing imperial collection. For instance, both the example in the Percival David Collection and no. 17 in the Palace Museum, Beijing, cited above, include later imperial inscriptions on the base that laud the glaze and texture of these monochrome wares. In “Ode to a Ge Ware Censer,” the Qianlong Emperor concludes that such Ge censers with fish-form handles were “inspired by admirations toward the fish” (Precious as the Morning Star: 12th-14th Century Celadons in the Qing Court Collection, Taipei, 2016, p. 239).