MONTREAL.- Welcome to the Imperial Palace! The Montreal Museum of Fine Arts presents Napoleon – Art and Court Life in the Imperial Palace, a major exhibition that re-creates the sumptuous ambiance of Napoleon’s court through the eyes of the Grand Officers and artists of the “Emperor’s Household.”

Over 400 art works and objects from the French palaces, most of them never before been displayed in North America, reveal the essential role played by the Imperial Household during Napoleon’s reign, from his coronation in 1804 to his exile in 1815.

Some fifty distinguished lenders have allowed the museum to bring together in Montreal works from such institutions as the Louvre, the Château de Fontainebleau, the Mobilier national, the Musée national des châteaux de Malmaison et de Bois-Préau, the Metropolitan Museum of Art, the J. Paul Getty Museum, the Museum of Fine Arts, Houston, and the Art Institute of Chicago. The public is invited to visit the six departments that made up the “Imperial Household”. The institution with its 3,500 employees was responsible for the daily lives and ceremonies of Napoleon and his family. By studying the leading figures of the court, we discover all the luxury and prestige of palace life. In order to ally himself with the old nobility and register his new dynasty as a continuation of the Ancien Régime, Napoleon dreamed up an etiquette hedged about with meticulous regulations.

An innovative layout re-creates the splendour of the apartments by incorporating mapping projections. Visitors will discover paintings, sculptures, furniture, silverware and porcelain, tapestries, silk hangings and court dress illustrating the opulence characteristic of the Empire style displayed to serve the spectacle of power. 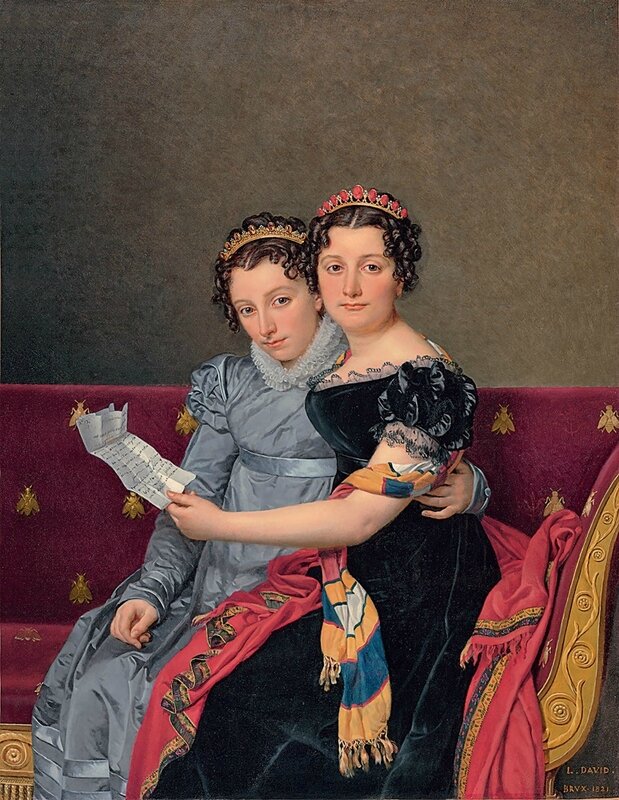 Nathalie Bondil, the MMFA’s Director General and Chief Curator, explains: “Ten years after we received the bequest of the Ben Weider Napoleon Collection, what a long way we have come! Thanks to Sylvain Cordier, curator at the Museum and an expert on the First Empire, and the loyal support of Ben Weider’s family and friends, we have been able to expand the collection considerably and extend our knowledge of the contents: it now ranks as the largest in North America.

Above all, this project which we initiated having needed in-depth research on the part of our curator, it has benefited from outstanding loans from our partners. The unique subject required him to travel through the United States and to France. Welcome to the Imperial Household! This “state within a state” provided all the necessary services for Napoleon and his family, to assert his dynastic power and to adopt his policies, even the most secret among them. You are invited to discover the pomp of court life thanks to those who organized the most private spaces of the Emperor’s life even in his exile on Saint Helena. This exhibition, a tribute to Ben Weider, is an opportunity to reflect on the staging of monarchical power and the persistence of certain codes even up to today.”

Sylvain Cordier, Curator of Early Decorative Arts at the MMFA and the curator of the exhibition, continues: “The Napoleonic court was a fascinating crucible in which a skillfully orchestrated publicity defined the nature of the new dynasty. With its codes of representation and staging – some inherited from the all too recent Revolution, others reviving the memory of the former kings of France and the aristocratic manners of former times – it presented an exciting combination of the spirit of the Enlightenment and the values of the Ancien Régime.

Beyond the pleasure of discovering the splendour of palace life between 1804 and 1815, the exhibition constitutes a fascinating topic for our own age and its relevance to the image of contemporary governments. The influence of teams of advisors and political commentators and the staging of media events may seem to us part and parcel of the contemporary culture of the power of images. And yet, the functioning of the Imperial Household shows to what extent these were already current two hundred years ago!” Follow the Grand Officers! Venturing into the Imperial Household
The exhibition is laid out according to the roles of the leading figures in the service of the Imperial family, which helped to shape the image of power. Grand Officers, chamberlains, equerries, master of ceremonies, ladies-in-waiting, pages, artists and artisans were all involved in composing the Imperial legend. Their origins, functions and everyday responsibilities fashioned the Emperor’s life. The exhibition follows the circuits of the courtiers as they moved through the living areas within the palace, the public staterooms that were open to visitors and also the private apartments strictly separated from the rest of the palace, where Napoleon shut himself off to conduct the business of government.

As a new ruler, Napoleon Bonaparte seized power at the end of the French Revolution. Transforming the Republic into a monarchy, he was depicted by the court painters as a modern sovereign and hero. With a series of portraits and historical scenes, the introductory gallery shows how artists like François Gérard, Antoine-Jean Gros and Andrea Appiani had to conform to precise requirements imposed by the Imperial administration in order to create visual propaganda glorifying the head of state.

The exhibition invites you to learn about everyday life in the six departments that made up the “Imperial Household”, as a visitor invited by the six Grand Officers.

A section devoted to the Grand Chaplain, the Grand Officer who presided over religious services, illustrates the role of these rites at court, exemplified by the sumptuous ceremonies of the consecration in 1804 and the marriage of Napoleon and the Archduchess Marie-Louise in 1810. Notable is the major loan of the majestic altarpiece executed for the occasion by the goldsmith Henri Auguste, displayed here for the first time outside of France. The Grand Marshal of the Palace held the most influential position in the Household, administering some 47 Imperial palaces. He was responsible for all decisions relating to their security, furnishings, procurement and organization of meals and banquets. Tables were adorned with objects and utensils produced by the official purveyors to the Imperial court, including the goldsmiths Henri Auguste, Martin-Guillaume Biennais and Jean-Baptiste-Claude Odiot for occasions such as the “Grand Couverts” or great official banquets. Outstanding loans made by the Mobilier national of France, an exquisite selection of silk wall hangings and cartoons for tapestries from the Gobelins destined to festoon apartments demonstrate the skill of the textile artisans in interior decoration. Antoine-Jean Gros, “Portrait of Géraud-Christophe-Michel Duroc, Duke of Friuli, in the Costume of a Grand Marshal of the Palace”, 1801–5. Nancy, Musée des Beaux-Arts.

The Grand Master of Ceremonies was responsible for ceremonial events, organization of audiences and protocol for state ceremonies. In charge of ensuring that etiquette was respected under all circumstances, he had to stage the spectacle of power in the huge reception rooms including the throne room, here superbly reconstructed thanks to numerous loans provided by the Mobilier national of France. It includes the Emperor’s throne from the palace of Monte Cavallo in Rome – the second capital of the Empire from 1809 to 1814 – the formal seats and stools, sumptuous tapestries from the throne rooms in the palaces of the Tuileries and Saint-Cloud, together with four cartoons for tapestries illustrating the parts of the World by François Dubois, after drawings by Jacques-Louis de la Hamayde de Saint-Ange. The one depicting Europe hung until only recently in the Palace of the Élysée, the residence of the President of the French Republic. 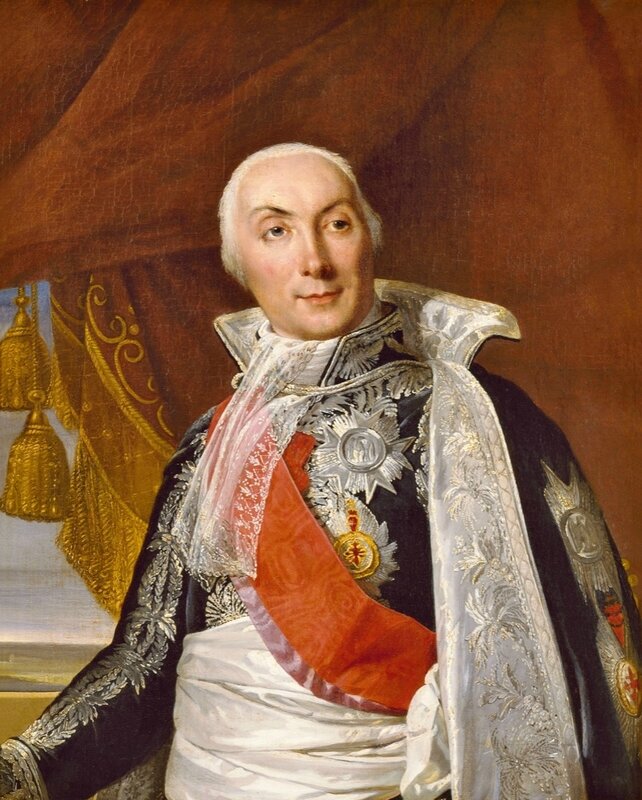 The exhibition evokes the Emperor’s bed chamber and the Empress’s Household, the organization of which was the duty of the Grand Chamberlain, to respect the Emperor’s private life. Thanks to the outstanding loan of a monumental painting by Jean-Auguste-Dominique Ingres, The Dream of Ossian (1813), a celebrated work commissioned to serve as a ceiling, evokes the Imperial bed chamber in the palace of Monte Cavallo. Considered the equal to the Grand Chamberlain, the Empress’s lady of honour had the same responsibilities, but toward the Emperor’s wife. This position was held most famously by the Duchess of Montebello, whose admirable portrait with her children by François Gérard is here thanks to a loan from the Houston Museum of Fine Art. The portrait of the family of General de Marescot by Fortuné Dufau also reveals the presence at court of two people from Montreal – a lady-in-waiting and one of the Emperor’s pages. Many luxurious Imperial gifts are also on display. One section is devoted to the Grand Equerry in charge of managing transport, horses, carriages and coaches for moving and journeys. A remarkable portrait of Lieutenant Legrand by Antoine Jean Gros, on loan from the Los Angeles County Museum of Art, depicts one of the pages brought to court before entering the ranks of the Grande Armée, where he died young. 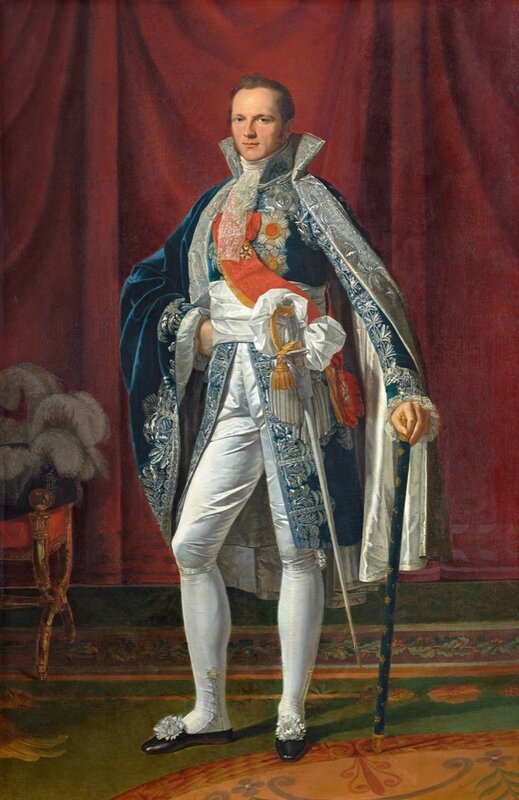 Ferréol Bonnemaison, “Portrait of Armand de Caulaincourt, Duke of Vicenza, in the Costume of a Grand Equerry”, 1806. Private collection.

A poor rider, Napoleon was nevertheless aware of the importance of the spectacle of the hunt. The Grand Master of the Hunt organized this pastime of the monarch. In this section we see personal items connected with the Imperial hunt – guns, furniture, clothing – as well as the monumental canvas Napoleon I Hunting in the Forest of Fontainebleau (early-19th century) by Carle Vernet. 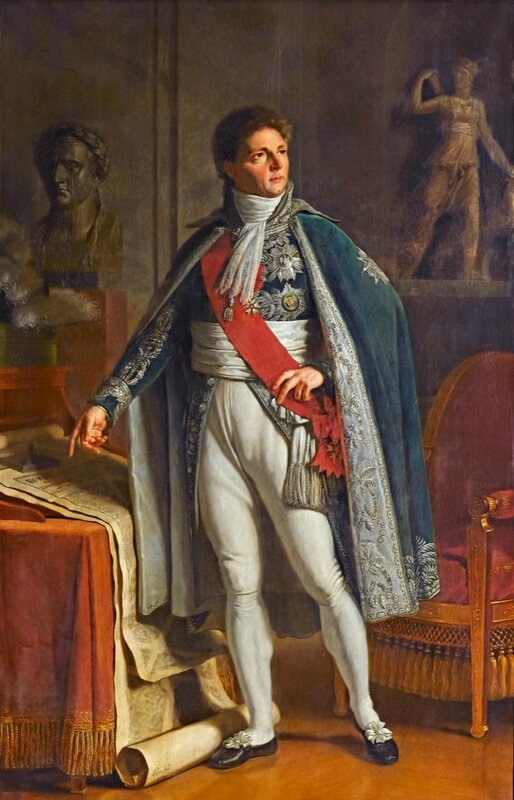 The exhibition closes with Napoleon’s two exiles, after his fall in 1814, on the isle of Elba and then on Saint Helena. A group of rare period prints from the collections of McGill University (Montreal) evokes the two episodes that concluded his reign. The hitherto unpublished loan of Napoleon’s aviary on Saint Helena is a metaphoric illustration of the fallen Emperor’s life as a prisoner in his last exile, a romantic legend still to come.

The Napoleon Collection of the MMFA
Some twenty of the works and objects presented in this exhibition are from the holdings of the MMFA. Some come from the large collection of objects bequeathed to the Museum by the collector and amateur historian Ben Weider: the recently restored Half-length Portrait of Napoleon in Court Robes (about 18051814), an oil on canvas from the studio of François Gérard; one of Napoleon’s cocked hats worn during the Russian campaign, about 1812; riding gloves and a shirt worn by the Emperor on Saint Helena. Visitors will remark an outstanding pair of spindle vases in Sèvres porcelain, Fire and Water (1806), acquired in 2017. Also from Sèvres, a tea service presented to Cardinal Fesch, Grand Chaplain of the Imperial Household, is one of the outstanding exhibits. Lastly, this collection contains a discovery, a sketch painted on canvas by Horace Vernet, Napoleon, on the Eve of the Battle of Borodino, Presenting to His Staff Officers the Portrait of the King of Rome Recently Painted by Gérard (1813).