CLEVELAND, OH.- Eyewitness Views: Making History in Eighteenth-Century Europe showcases outstanding masterworks by revered artists who recorded some of the most newsworthy events and impressive spectacles of eighteenth-century Europe. Whether depicting a triumphal procession, a joyous celebration, or the catastrophic eruption of a volcano, the vibrant, colorful, and often monumental paintings in Eyewitness Views re-create what it was like to witness these magnificent occasions. Featuring nearly 40 richly detailed master paintings that utilize the impressive monuments of Venice, Rome, Paris, Warsaw, and other European cities as a backdrop, Eyewitness Views is the first exhibition to exclusively examine view paintings—faithful depictions of a given locale—as representations of contemporary (eighteenth-century) historical events. While costumes and customs illustrated in the paintings may differ from those of today, the feelings of anticipation and excitement generated by witnessing a momentous event will resonate with every visitor to this beautiful and historic “time capsule” exhibition. Eyewitness Views: Making History in Eighteenth-Century Europe is co-organized by the Cleveland Museum of Art, the J. Paul Getty Museum, and the Minneapolis Institute of Art, and is on view in the Kelvin and Eleanor Smith Foundation Exhibition Hall from February 25 through May 20, 2018.

“Eyewitness Views provides our visitors with a wonderful opportunity to experience history as it was being made,” said William Griswold, director of the Cleveland Museum of Art. “The large-scale, vibrantly detailed paintings in the show will transport viewers to eighteenth-century Europe, immersing them in the most elaborate celebrations, festivals and historical events of the time.” Regularly commissioned by rulers, princes, ambassadors, and religious dignitaries to commemorate key moments in their personal and professional lives, master view painters such as such as Bernardo Bellotto, Canaletto, Francesco Guardi, and Giovanni Paolo Panini recorded events ranging from the spectacular pageantry of a Venetian regatta to the solemn ritual of a religious procession. In the process, they produced some of their most significant and beautifully detailed works. Dramatically staged for the enjoyment of a wide range of spectators, and typically involving sumptuous costumes and elaborate temporary decorations, the events depicted give the viewer insight into the rituals and rare occurrences of a bygone era. Other paintings document some of the era’s most horrific natural and man-made disasters: fires and volcanic eruptions provided particularly compelling imagery.

“The level of detail in these paintings can be astounding. To please their patrons—who had often paid for both the celebration depicted as well as the painting of the event—artists like Panini and Canaletto precisely documented the most minute elements of personality, costume and décor. Other artists excelled at conveying all the energy and atmosphere of an important festival or ceremony. Sometimes artists were confronted with the challenge of painting an event that they did not personally attend. This exhibition helps viewers understand the various ways artists addressed such challenges,” said Marjorie E. Wieseman, the Paul J. and Edith Ingalls Vignos Jr. curator of European paintings and sculpture, 1500– 1800, and chair of European art from classical antiquity to 1800. Eyewitness Views: Making History in Eighteenth-Century Europe is separated into four thematic sections that investigate different aspects of this intriguing genre of painting.

Memory and Manipulation explores whether view painters were faithful chroniclers, capturing events exactly as witnessed, or whether they manipulated reality to meet aesthetic requirements and the expectations of their status-conscious clientele (and if so, how?).

Civic and Religious Ritual examines an array of historic events that took place in Europe during the period, including religious feast days and public rituals. Whether sacred or secular, these occasions constituted impressive demonstrations of civic pride.

Festival and Spectacle showcases the pageantry and entertainment in Venice and Rome in the 1700s, including ceremonial regatta performed for visiting dignitaries, and elaborately staged celebrations of royal births and marriages.

Disaster and Destruction presents scenes of devastation caused by fire, natural disaster, and political turmoil. These paintings downplay the presence of rulers and nobility to emphasize the plight of the broader population, and to encourage the viewer to identify more strongly with the horrors depicted. 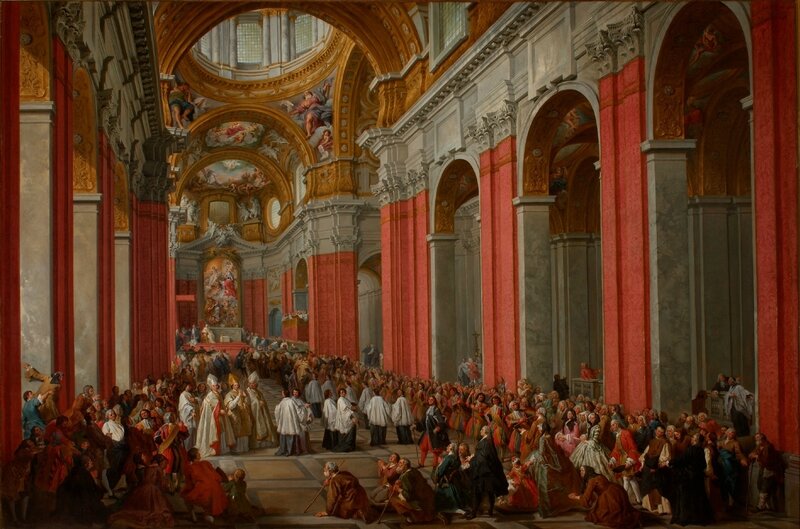 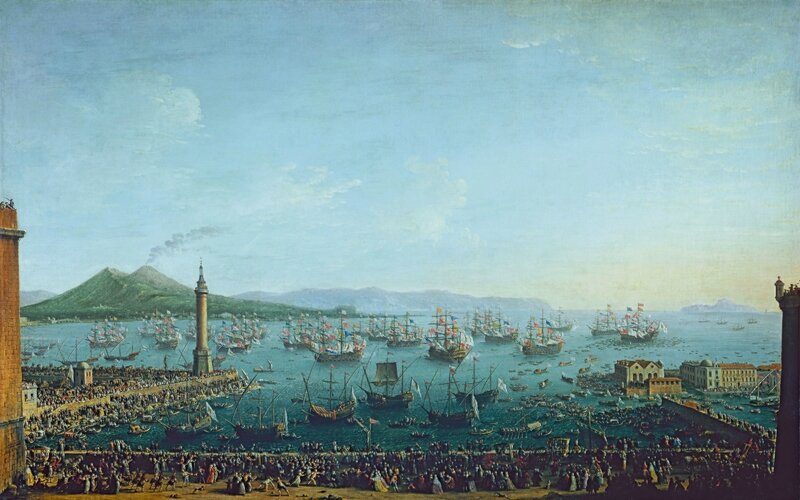