of baluster form surmounted by a trumpet neck and flared rim, painted all around in pastel-hued enamels with a dramatic battle scene depicting General Liu Xiu of the Han dynasty driving Wang Xun, the rebel leader, and his army of wild animals out of Kunyang, the action taking place by the city gate with Liu Xiu stationed on top of the gate among officials and generals, and appearing again below at the helm of a mounted army charging through the gate to attack the Xin imperial troops, Wang Xun and his entourage shrouded in a green plume emanating from a double-gourd carried by a demon allied with the insurgents, the shoulder with quatrefoil cartouches enclosing scholar's objects reserved against a brocade ground, the neck with four officials on a balcony offering gifts to the Queen Mother of the West arriving on a cloud accompanied by a phoenix, coll. no. 1578.

Note: The painting on this vase depicts one of the turning points in the decline of Emperor Wang Mang’s Xin dynasty (9-23 C.E.) and the restoration of the Han dynasty. The decisive battle depicted at Kunyang City took place on July 7th, 23 C.E.

At Kunyang, Liu Xiu convinced the local rebels, known as Lülin (the Green Forest), to stay in the city and defend its walls against the massive army led by Wang Mang’s deputies Wang Xun and Wang Yi. As the Xin army laid siege to Kunyang, Liu Xiu covertly escaped and rallied thousands of sympathetic troops from neighboring counties. Upon their return, Liu led a small army through Kunyang’s gates to attack the Xin forces head-on while the additional Han soldiers ambushed Wang Xun’s army from all directions. Liu Xiu killed Wang Xun in the battle. As the surviving Xin troops fled, a flash flood erupted and drowned many. The Xin army was utterly defeated and did not recover from the events at Kunyang. Two years later, Liu Xiu successfully pacified remaining rebel groups, stabilized the Han empire, and ascended the throne as the Guangwu emperor.

In the present depiction, Liu Xiu leads the pack, charging on horseback with his blade raised to strike the final blow to his nemesis. Wang Xun, riding a Buddhist lion, attempts a hasty retreat. He and the beasts are enveloped in a speckled green cloud issuing from a double-gourd carried by a demon. This element adds a new dimension to the story, suggesting that mystical forces intervened on behalf of Liu Xiu to restore rightful rule.

The story of Liu Xiu’s victory at Kunyang may have had particular significance in the Kangxi period. Following the upheaval of dynastic change in the mid-17th century, the Kangxi emperor was responsible for solidifying and legitimizing Qing rule by suppressing rebellions within the empire and along its borders. This vase visually presents a parallel between his own efforts and those of a celebrated historic leader who unified the population and paved the way for two further centuries of dynastic continuity. The presence of the Goddess of Immortality at the neck of the vase, echoes the wish for (dynastic) perpetuity.

A famille-verte rouleau vase with this subject matter and a strikingly similar composition in the collection of The Taft Museum in Cincinnati, Ohio is illustrated in David T. Johnson, 'Narrative Themes on Kangxi Porcelains in the Taft Museum', Orientations, August 1993, fig. 3 (fig. 1). Another rouleau vase with this narrative, from the collection of Dr. Ip Yee, sold in our Hong Kong rooms, 19th November 1984, lot 224, and again in those rooms, 20th May 1986, lot 143. A slightly smaller yen yen vase featuring this episode on the body and a deity of immortality at the neck is in the collection of the Victoria and Albert Museum (coll.no. C.1276-1910). 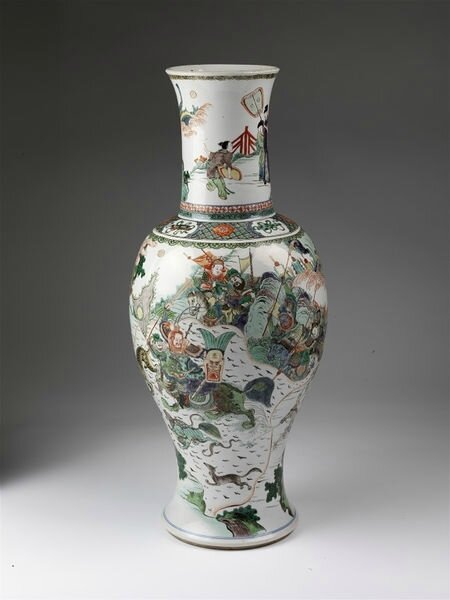